No more an Associate team that was only up and rising and still had its best days ahead of it, Ireland are a spirited side that have been tussling with the almighties of the great game and for a while now. It would be a fool’s errand to take a side beaming with names like Paul Stirling, Kevin O’Brien, Harry Tector, Curtis Campher and Andy Balbirnie any lightly.

They nearly left Afghanistan recently when the two forces met for a fascinating T20I series held in India. The West Indies learnt the perils of taking the quiet force of cricket lightly when earlier in January, Ireland turned a corner in their game by beating the Pollard-led side in the Caribbean for the first time ever to take home a comprehensive ODI series victory.

Therefore, when many say that Cricket Ireland is known for winning hearts, especially in the ICC events, they aren’t bluffing; they mean serious business.

Some of their exciting talents always tend to leave their mark. It all started with a win against Pakistan in the 2007 World Cup. And how can one forget the historical victory against England in the 2011 World Cup, followed by the win over West Indies in the 2015 World Cup?

There is something about Irish players that they always leave an impact in the pressure games. Likewise, there’s something about Curtis Campher and Harry Tector, two brightly shining jewels of Irish cricket that have in them to become diamonds.

The players’ desire to represent Ireland is incredible. But how so?

Curtis Campher is a promising young player from South Africa who made his way to represent Ireland. The seam-bowling all-rounder, born in Johannesburg, represented South Africa in the Under-19 World Cup. It is believed that Niall O’Brien was the one who asked the fantastic all rounder to relocate and represent Ireland. He was aware of Campher’s Irish ancestry. As a result, he requested that he could use his grandmother’s Irish passport, which made it much easier for Camphor to qualify and play for Ireland.

Along with Campher, Harry Tector is proving to be a valuable asset to the team. It’s something that a strong force like India must not take lightly.

He made his One-Day International debut alongside Curtis Campher against England. Although, Harry did not have the best ODI start, his best days would lay in front. He began to progress and was awarded the central contract in 2020. In January 2022, he struck three consecutive fifties against the West Indies. This was no mean feat.

It was a sign of consistency against a side with names like Shai Hope, Nicholas Pooran, Kieron Pollard, Shamarh Brooks, all of whom have already made notable contributions to shaping ODI cricket, Pollard among them a legend.

Furthermore, he scored a half-century against the United Arab Emirates in the final of the T20world cup qualifiers 2022. However, his efforts in the final were insufficient to secure a victory.

But one reckons, Curtis Campher is a name that will inspire young Irish players. He left behind a country like South Africa, which is a figurehead of the sport and a legendary pantheon of the game.

The what-might may still bother him if he’d have stayed back and not moved to Ireland.

But he seems to have adjusted to Ireland akin to a fish to freshwaters. Cricket Ireland must have cherished his decision of playing for their rising unit.

There was more evidence of his skill when, in 2020, he made an excellent debut against England, scoring a fifty and assisting Ireland to a respectable total. He’s had a few bad games recently and is hoping to get back into the playing eleven. Harry, on the other hand, is a native Irishman who has worked extremely hard to earn a spot in the team.

Both Harry and Campher have been named in the 14-man squad that will face the Indian team in Dublin. The young Indian team will face Ireland in a two-match T20I series.

And whilst talks that they will wreck havoc for India are premature engagements with big talk, it’s certain that these new pillars of Ireland have in them to leave a mark in this series.

All of this and the added pressure of performing well against a unit as mighty as India promises to make the contest a mouthwatering prospect. 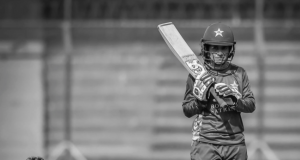 An Appreciation Of Javeria Khan: The Bedrock Of Pakistan Women’s Batting!

Dev Tyagi - May 14, 2021
0
Perhaps the number of times one may have heard there's never a dull day with Pakistan in the field is equal to the number...