If you were to Google the phrase “Master Blaster“, then the probability of Sachin Tendulkar being the search result could well be a nine or nine and a half on ten, to give an example. Some results may point to Sir Viv Richards or Sir Sunny Gavaskar.

If you were looking to find just who “The Prince of Trinidad” in Cricket is, then the probability of Brian Lara being that would be ten on ten, to give another example.

Similarly, if you ever Google’d how to say the phrase ‘relentless’ in Dutch, then the probability of the answer being meedogenloze would be ten on ten.

But if you were looking for a face that could accompany the term “MEEDOGENLOZE” ably, then you’d not have to really surf the Internet; simply placing the picture of Morten Kriek next to it would suffice.

You are likely to come across many who’ll boast of their experience as being the most poignant; individuals who’ll claim to offer life changing advice for they’ve seen it all.

But there won’t be many who’ll come close to one who, quite frankly, saw it all, dangled between the morose of life and the glimmer of hope and yet, emerged unscathed like a certain Morten Kriek.

For someone who played cricket for the Netherlands as a youth cricketer, developed not one but two rare forms of blood cancer, survived it all and, despite having walked the threatening tightrope between hopelessness and hope in life, Morten Kriek continues to give back to the sport.

And that is no mean feat.

It takes courage. It takes a hard-as-nails fighting attitude in life.

More than anything else, truth be known, it takes some form of compassion to hold on to life and not turn bitter when you’ve spent plenty of your time hanging out in medical facilities strapped with countless intravenous injections instead of being on a cricket turf, a place that always signified life to you.

Though, the life Morten Kriek has lived is perhaps more interesting and fascinating than most nail-biting, emotion-evoking Netflix content you’d have come across.

Long before Malinga burst on the scene and was slinging it, Morten Kriek was around and was slingier. He was talked about in the late eighties and nineties on the European cricket circuit, he played club cricket in England, found much love at the Surrey-based Kingstonian Cricket club and that’s not all.

At the prime of his cricketing journey, much of which was spent playing domestic games and club cricket, Morten Kriek was among the fastest bowlers there were.

His fierce spells even helped his English club mates like the Surrey Cup. He’d be one of the pivotal figures who helped set up the Kiev Cricket League, precisely in the country you hear wartorn and bloodied tales about all thanks to needless Russian aggression.

And that’s only the tip of the iceberg.

Despite constantly baring the brunt of a life-threatening Leukemia, this smiling-albeit-lanky Dutchman with an infectious thirst for life has played multiple roles without much ado; that of a caring husband, a doting father and as a keen entrepreneur that wishes to reposition The Netherlands as the bustling epicentre of commerce and trade in Europe, a position the country once famously enjoyed. That’s before the power tilted towards France and Germany.

And how’s he doing that? By running a global network of banking and finance executives, organising lobby events and conferences.

And oh, by the way, Morten Kriek is also the analyst of the Dutch Cricket team. Phew! How does he do all of that?

That being said, what’s most special about Kriek is that he’s willingly contributing to his nation’s cricket set-up, purely out of love for the game and his country. Deliberately giving the cricket unit his time when he could so easily put it towards any other objectives or perpetuating entrepreneurial ambitions.

That, selfless spark, in essence, is Morten Kriek.

Caught At Point caught up with the Amsterdam based gent and delved deep into his cricketing journey.

Morten Kriek sir, can you please take us through the role of a cricket analyst and what does your role entail with the men in orange?

• Present opposition analysis to playing and coaching staff in a clear and impactful manner.

• Work with Head Coach, and Assistant Coaches by collecting and analysing training data and footage to assist with team and individual developments.

• Effectively analyse performance data and footage from match environments and present this to coaches in an impactful manner to improve player performance and development.

• Set up all required matchday coding equipment at any out ground hosting The Netherlands XI teams in a home fixture.

I have been slowly getting into this role, enjoying great support from James Hilditch. James is assistant coach of the team, who did the analyst work in parelel to his coaching duties, until I arrived.

We will use the time between series to get me up to speed even more.

It wasn’t cricket fights cancer that got me back in the international setup. Roland Lefebvre has always been a good friend of mine. Cricket is a small sport, and those who played at international and/or professional level, we all tend to know each other well.

Roland had been asking me to join the support staff as an analyst ever since I returned to The Netherlands. Due to COVID all matches were cancelled last year. That was actually a good thing to happen, since I would not have been able to take on the role because of my illness.

What do you think of the talent in the current Dutch set-up?

The talent in Dutch cricket is immense, but the setup and the funding are so very small. We have a team of volunteers and underpaid people, who go above and beyond, sometimes wearing 3 hats and fulfilling 5 roles, to ensure the engine keeps going and the boys can play.

What impressed you the most about the Dutch Cricket team?

They provided good resistance against the West Indies, but were hammered by England. It was a great learning curve regardless. But the team and staff do not really like the terms associates and minnows. They don’t like to read over and over again that they competed well. They want to do so much more than compete. They genuinely believe they can beat anyone on the day, and they always play to win. The players’ and coaches’ attitudes are what impressed me most this series.

What’s needed ahead for this very exciting band of cricketers?

Going forward, we need more exposure to top-level cricket and more funding. This could have been a copy paste from any article in the past we 25 years. We have been showing the world we can play since 1996. We have produced world-class cricketers in PJ Bakker, Roland Lefebvre, Andre van Troost, Bas Zuiderent, Alexei Kervezee, all home grown. And the current crop is great to. There have been rumors on both sides of the North Sea about an annual 4-nations T20 or ODI tournament…. Dublin, Glasgow, London and Amsterdam.

That would be amazing and so good for the game. The Dutch would also like to return to the English domestic competition, like the T20 Blast. I remember back in the day we cause quite a few upsets in the Natwest Trophy and the Cheltenham & Gloucester Trophy.

We need support from the counties and the ECB. Hopefully our performances, effort, drive and talent gets noticed.

What lays ahead for Cricket in The Netherlands?

Cricket has a great future in The Netherlands and I am excited to be part of it now, and going forward. I started my ICC Coaching Level 1 training and already Signe dup for Level 2, which starts in September. Besides becoming a great analyst, I also believe I have a lot to offer in the coaching department, and I would love to carve out my niche in that space…. What area? I am a former professional fast bowler and ice hockey international, the quickest sport in the world. I love speed. Besides that, I obtained a Masters Degree in Positive Psychology in 2015 and a diploma in Positive Psychology coaching in 2017. Think speed of mind, fast bowling and mindset and you get an idea of whet I am heading.

Our next series starts early August with 2 T20I’s against New Zealand followed by 3 ODI’s against Pakistan. The future is bright, the future is orange 🙂 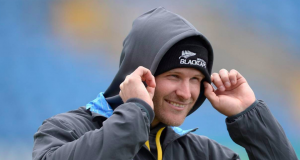 From There To Here To Some Place Else- Corey Anderson’s Whirlwind...

Abhinav Bose - December 10, 2020
0
A true representation of migrancy and cultural displacement has long been the central element of many a literary work in the English language and...