“Of all the things said about cricket, one that I just haven’t understood at all is why cricketers are branded warriors. It’s not a war they are waging when they go out to bat, is it?” exclaimed a voice in a Cricket media event organized in India a few years ago.

The voice carried weight, not only of wisdom, but of reasoning. It was, besides being ever-pleasant, widely known. The person behind the voice sported, for a change, not the familiar smile but a curious gaze.

It wasn’t upset; it simply wished to address a borderline concern associated with making demigods out of mortals to an audience that was perhaps already in awe.

Harsha Bhogle, truth be told, was simply doing his job.

He was holding a view, which as per normal, was a hugely interesting one.

He was, quite simply, enlightening lives in an age where episodes like spot fixing, use of banned substances often go a long way in making the sport dark.

To a sport that births sobriquets, is defined by records, and enriched by envy-inspiring stats, Harsha Bhogle is a reminder that there’s more to cricket and that sport goes beyond the realm of stats and outcomes.

He’s our equaliser. He’s the man who addresses Cricket from the vantage point.

Much like that scrupulous arbiter that sits at the centre, uninclined to lean towards any leftist view and just as adrift from the right-wingers.

The one who spoke and still talks sport the way it is, not how you or I would imagine it to be.

Harsha Bhogle is more than a wordsmith; perhaps one of the last remaining pillars that has proven commentary on the sport can be non-partisan.

Such an enormous achievement in an age where flattery is thrown around needlessly, unimaginatively even akin to an over-chewed gum that boringly sticks along.

In a sport where we love Hashim Amla’s flick, Laxman’s wristy elegance, where we are yorked by the brilliance of Akram and Bumrah and where Kohli versus Babar is the new Lara versus Sachin, Harsha Bhogle commands his own space.

He’s cricket’s vernacular, a voice to which there can’t be an alternate, ageless yet 61, and despite living over three and a half decades behind the mic, isn’t done yet.

In an age of brands, back injuries, endorsement deals, burnouts, and monotonous PR-driven answers, he’s a real person.

His is a legacy of unquestionable commitment to serve the sport that’s constantly reinventing itself and even its fanbase.

Much like India owes Dravid a debt of gratitude for saving the team, time and again, from despairing outcomes, we owe our allegiance to the game, at least in some capacity, to the gentleman without whom cricket would’ve seemed a game with a no-result as outcome.

The Harsha Bhogle- 8.9 million fans on Twitter, north of 1849404 Facebook followers- is followed by nearly every huge cricketer whose image he has shaped through his magnificent array of words and irreplaceable oratory is touching.

In a game that can be- and is- often about bitter rivalries that Harsha is admired universally is proof that cricket knows a thing or two about loving back those who love it endlessly.

He’s firm evidence that not all superheros wear capes and not all don the gloves; some simply wear glasses that mirror an undiminishing love for Cricket.

It’s something that can’t be taught nor acquired in noisy franchise auctions.

Not long after Hyderabad’s greatest export to the world of cricket commentary became a figurehead in the commentary box that a prominent TV channel began to scout for more like Bhogle.

That is when ideas like “Harsha ki Khoj (the search for the next Harsha)” came to life.

We live in a world where without much ado, many pair pink T-shirts with blue jackets and eye-blinding white shoes inside salubrious broadcast rooms to have their expert comments heard and views taken seriously.

But none come close to matching the analytical excellence and the evocative reach of Harsha Bhogle and few ever will.

Sachin’s retirement may not have been the grandiose moment it became had Harsha not lent his timeless voice to it. Few could’ve made Sir Geoff Boycott sport a grin other than Harsha Bhogle.

In an age where having an opinion often without reason and exhibitioning nationalistic fervour are quite simply, being overdone, Harsha’s nuanced voice and inbred simplicity rescue Cricket from the tyranny of cliches.

His voice is beautiful, so hearable, still remarkably fresh, has nothing to do with vitriol and has space to acknowledge India’s opponents.

He’s every bit the reason to be excited in the game, irrespective of whether a T20I or a Test, whilst many, who simply tread the path of “the ball meets the middle of the bat” are little more than yawn-inducing.

Harsha is a Tulip that showers newfound love each time it witnesses a delivery in a live contest whilst many with overbearing exuberance are perhaps decaying grass that do little to spike your imagination.

It’s not that a change in proceedings as brought out by a dismissal or a batter breaching past a milestone does not affect Harsha.

It’s just that he abstains from going for the overkill. Which is why Cricket isn’t just a sport when seen from the eyes of Harsha Bhogle; it actually becomes a narration of a life-changing event when captured by the unassuming voice of one of the great sons of the country.

Keep saying the way you do, Sir. Happy sixty first. We’d like you to bring up the hundred. 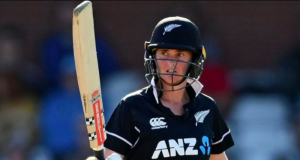 Chandhana Gogineni - May 19, 2022
0
One of Otago’s finest exports to the great game of Cricket, someone whose journey...