Women’s cricket has expanded its reach beyond the realm of the full members. The Associate members are now in direct contention to compete for a spot in the showpiece event.

The ICC’s push for the inclusion of women’s game in the Commonwealth games, aka CWG will reap benefits for many players globally in terms of viewership and talents taking up cricket as a profession. Add to that the global involvement of countries in the game.

It also aids in increasing the people in Women’s cricket from every part of the world. This is evident from the 5054 athletes from seventy two countries participating in the CWG.

Women’s cricket had a watershed moment after the 2017 Cricket Worldcup that changed the outlook of the game itself.

The board’s recognition of women’s cricket started with many promising changes that gave a much-needed boost to take the game forward. Cricket boards began with an increase in telecast and streaming of matches. What also surged were the contracts to players and tours between full-time ICC and Associate members.

These developments culminated into a tipping point known as the T20 World Cup of 2020 T20, which became the most-viewed women’s game ever.

The pandemic reversed many of the progressive changes that came post 2017. It needed the ICC to push for the game’s inclusion to transcend boundaries in the world. It still restricts the number of countries participating in the ICC events.

Taking into account all regional qualifiers to the 2023 T20 world cup, thus far, thirty four countries have participated in these tournaments. Though, only 5 qualified for the final qualifier that is set to take place in UAE in September this year. The footprint of women’s cricket is less compared to other games like Football.

But significant breakthroughs as how one would call them have time and again, occurred to save the day. It’s the CWG right now. And prior to that, in the not too distant past, the Fairbreak Global.

The internationals were able to share their technical expertise with Associate players and each one of them involved was given an equal opportunity to play and engage in the game. Accessibility also increased in the women’s game with such tournaments being in the pipeline in the near future.

Now, women’s cricket in Commonwealth games is set to become another step towards better inclusion of associate teams.

Could anything else be nicer?

It had a qualifier tournament in January 2022 in which Sri Lanka emerged winners. This qualifier was based on the T20 rankings at that time.

If the ICC, clearly pushing boundaries in the bid to popularise women’s game, can push even further is then we could get breakthroughs like the incorporation of women’s game in the Olympics. Of course, that’s still in the future.

But in order to get there, one reckons they should at least ensure that replicate their own structures to organise regional qualifiers.

It would be brilliant to see more teams given the window to participate in the multi-sport event. So how does this pan out?

A sport like women’s football has twelve teams in the Olympics despite having qualifiers around the globe. A global game like cricket can offer much more to other teams in such events.

A separate revenue model like that of the World Cup has to be secured to make sure this is a continuous event in the coming years for the game’s development.

T20 leagues, think the WBBL, The Hundred, have given a good chance for International players to play the game at the highest quality.

Where else, would you have seen Kate Cross sharing the same team with Deandra Dottin or a Smriti Mandhana and Anya Shrubsole as teammates. But the Hundred has turned that great possibility a reality.

But back to the CWG while not all players get picked, tournaments like the Commonwealth Games give teams maximum match time like that of the ICC events.

In that sense, it would be ideal to see more matches in the lead up to the next CWG in 2026.

CWG-2022 could be the best platform to promote women’s cricket and the action is set to begin with reigning world beaters across all the formats Australia taking on India on July 29, 2022.

One hopes this too turns into a heartstopping game, much like the actual T20 World cup final between these two sides and the T20I India won in the tri-series conducted just prior to that preeminent event.

And while it makes little sense to scrutinize the current event since it is bringing renowned names in the women’s game together outside of the confines of ICC’s premier events, there’s still scope to do a touch more.

The event’s motto in future could also be about inclusiveness combined with outreach. A no brainer to ask that needed? It will serve the purpose of promoting the game all over, but the Commonwealth games will be the first big step towards it. 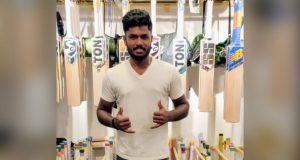 Time And Tide Wait For None And Definitely Won’t For Sanju...