A few days ago, what Tristan Stubbs did would surely have made none other than Yuvraj Singh happy, the latter, unquestionably one of the cleanest hitters of all time. For it wasn’t just what Tristan Stubbs, a rising Protea youngster did with the bat but who he did it to.

Stubbs, all of two months old in international cricket, blasted the English bowling line-up in a way few have. His 72 came off just twenty eight deliveries at a more than attractive strike rate of 257. Read that again.

Every shot Tristan Stubbs hit was clean enough to land the white ball into the first or second tier of the Bristol ground with the crowd gazing in wide-eyed wonder.

It was as if someone wrote an invisible disclaimer: “While watching Stubbs, don’t be shocked if you got flashbacks to Yuvraj Singh’s 2007 T20 World Cup innings.”

Coincidently, Yuvi and Stubbs both caused chaos in England’s dugout. But unfortunately, Stubbs’s effort came in a losing cause; the Proteas going down by 41 runs but not without a fight.

Jonny Bairstow’s 92 helped England reach the massive total of 225. Stubbs’ was the knock that truly announced him at the international level; he hammered eight clean sixes, which threatened the English team.

Just the sort of inning that would trouble anyone, be it a Bumrah, Roach, Bolt or Cummins, figuratively speaking.

Moreover, Tristan Stubbs’ effort truly puts into focus the next generation of players competing in the World Cup 2023 since South Africa no longer possess a majority of those who featured in the last World Cup, circa 2019.

What’s worse is that Faf du Plessis, who is still around and still going strong in white-ball cricket, is conveniently overlooked that’s when he’s only announced retirement from red-ball cricket.

South Africa’s scouting crew is on the road, looking for a diamond of players to replace those lost in the recent years.

It wasn’t supposed to be an easy task to fill the shoes of the greatest players, but so far, they have been successful.

Rassie Van Der Dussen is in top form for the Proteas, often delivering match-winning knocks. We watched Miller in IPL 2022, which was his finest IPL ever, and he also won the title for the Gujarat Titans. Reeza Hendricks is turning out to be an emerging one too. The four back-to-back fifties recently offer massive indication of his form and potential.

Can you recall the 2015 ODI between South Africa and the West Indies, in which the Proteas produced a huge total of 408?

That is the Proteas’ power. That’s what they’re famous for. With Tristan on the team that has names like Markram, RVD, de Kock, and not to forget, Dewald Brevis, this appears to be happening again. Anytime soon- we don’t know as yet.

The Proteas are developing a type of talent that will be in high demand in the future. South Africa’s greatest batter, AB De Villiers, would be happy to see youngsters like Dewald Brevis, already known as “Baby AB,” and the clean hitter Tristan Stubbs crushing the top bowlers, knowing that the country’s future is in good hands.

But it’s interesting to think how Stubbs got his first real chance to make news. The Mumbai Indians replaced Tymal Mills with Tristan Stubbs earlier this year. He only got to play a couple of games and got run out in one of them. Not the kind of start he’d have wanted.

But now in the aftermath of the Stubbs assault over England, the Mumbai Indians know what the big-hitter is capable of.

One expects, he will be given more opportunities in the IPL 2023. Provided he’s in form and continues the good show he’s demonstrated, the MI paltan will be unstoppable with Dewald Brevis, Tristan Stubbs, and the powerful Tim David.

With Pollard out of action, South African Stubbs will be an adequate replacement.

What Does The Future Hold For Tristan Stubbs?

Rassie Van Der Dussen did not participate in the three T20 Internationals against England. But Tristan didn’t let anyone know he was missing. He made his T20I debut against India but did not bat in either of the two matches he played.

In the opening T20I against England, the right-hander batted for the first time at the international level and destroyed the opposition, including Reece Topley, Richard Gleeson, and David Willey.

Not the easiest of bowlers to put to the sword, right?

Despite his ability to strike the ball cleanly, he can also keep the wickets and can bowl too. But that’s promise that ought to be supported by consistency.

Don’t you think that one-handed stunner he took in the third T20I against England demonstrated his ability to fly as well?

Maybe, we are just getting carried away by all that Stubbs, so capable, so young, is already offering?

Maybe we need to calm down a bit; for he’s so entertaining that it’s hard
to.

With South Africa launching their T20 league, the scouting staff will be able to get a better look at domestic and emerging talent.

Many an eye shall be on Stubbs now.

There will be two World Cups in the near future. The T20 World Cup will take place in October this year, while the 50-over World Cup will be happening in the summer of 2023. It shall be an ideal chance to rise.

Stubbs, who is 6’4″ tall, is well known to English fans after his knock in the T20I against England. He has
taken the position of Wanindu Hasaranga, who was denied permission to play The Hundred by the Sri Lanka Cricket Board. Additionally, Tristan Stubbs will be a welcome addition to the Manchester Originals. That is the magic of one knock; his seventy two landed him in the most competitive English cricket tournament.

That being told, if you care to notice, you’d know that Tristan Stubbs has quite a Dinesh Karthik-like role.

India’s hugely under-appreciated keeper has been given a specific role as a finisher in the Indian team. The man who batted in the middle order is now batting after Ravindra Jadeja. This shows that the teams require a player at the bottom of the batting order to provide a finishing touch in the final few overs. So
haven’t the Proteas discovered their finisher in a 21-year-old, Tristan Stubbs?

Maybe, too early to say or maybe not.

Bavuma’s team fought hard against the Indian team in the T20I series, drawing 2-2. They have now defeated the English team on their home turf and are moving forward in the right direction ahead of the T20 World Cup.

Against that narrative to have someone like Stubbs in the mix, it ought to be said, the Proteas appear to be one of the tournament’s hot contenders.

But then again, one doesn’t quite know when it’s South Africa in the question. Or maybe, one will now that someone like Tristan Stubbs is in the mix. 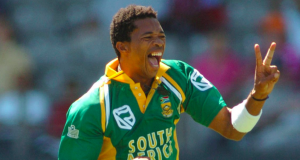