The ICC Cricket World Cup, 2019 held in England and Wales was played in conditions that were completely different from those prevalent in 1999, when the showpiece event was held in England for the last time.

In 1999, the Tournament was a low- scoring affair, where swinging conditions dictated terms and a score of 220- 235 was considered to be a fighting total. But, things had taken a considerable turn during the 2019 edition. The vagaries of swing and seam were replaced by the hegemony of batting might, where the likes of Rohit Sharma, David Warner and Shakib Al Hasan topped the batting charts.

Kuldeep Yadav could not survive it against the home team when he conceded 72/1  and Chahal ended up with figures of 88/0  in a Group Match where Rohit Sharma’s heroics was not enough to win the match for India. Kuldeep Yadav was dropped henceforth and played only a solitary match after that.

Kuldeep’s brilliant googly to dismiss Babar Azam and his economical spell against archrivals Pakistan had by then become a component of distant memory. And by the time, India stepped on the field against New Zealand in the Semi-final, Ravindra Jadeja started getting preferred over Kuldeep Yadav because of his all- round skills.

The move, though logical at that time, contradicted India’s long-treasured modus operandi!

Social Media is a kaleidoscopic world where a myriad of emotions and experiences are held out for public display, which in itself presents explicit as well as implicit dangers.

During the 2019 World Cup, a video had surfaced where Kuldeep was seen to be reacting angrily at a little girl. It was symbolic of his tempestuous mindset, triggered by his sudden ouster from the playing XI.

By then, his mind was muddled enough to let self-doubts creep in.

But, things had been far better leading up to the marquee tournament.

In the final and deciding Test Match against Australia in 2017 at Dharamshala,the Uttar Pradesh tweaker picked up a  four- wicket haul and broke the back of Australia’s batting. And, R. Ashwin and Jadeja’s mauling against Pakistan in the final of ICC Champions Trophy,2017 led the Indian Team Management to consider playing Yuzvendra Chahal and Kuldeep Yadav in all white-ball matches. The famed ‘Kul Cha’ tasted considerable success after that decision.

The faith reposed by the Indian selectors and Team Management was vindicated further when Kuldeep Yadav and Chahal bamboozled South African batsmen in the ODI series in 2018 played in South Africa itself . The former picked up 17 wickets and presented a strong case to play alongside Chahal in the 2019 World Cup.

The bouquet of variations owned by Kuldeep Yadav was seen as an exciting prospect and with Ravi Shastri dubbing him as the frontline overseas spinner, Kuldeep’s career was moving on the right track.His figures of 5/99 in the land of Shane Warne in 2019 further escalated his rise in International Cricket.

Kuldeep’s inclusion in the earlier stage of the World Cup also proved that India were going to stay true to their policy of turning to wrist spinners as Virat Kohli and Ravi Shastri wanted wickets in the middle overs.

So, did India do the right thing by breaking the confidence of Yadav and drifting away from their well- crafted template, especially during the business end of the World Cup?

India squandered the opportunity of playing a left- arm wrist spinner, a rare breed of bowling skill in International Cricket against New Zealand in the knockout match.Suddenly, there were talks of his slow pace, his over-reliance on flight. His frustration and confusion was palpable.

IPL can be a cruel tournament for players grappling with confidence. Kuldeep Yadav, who was seen as a smiling assassin, bestowed with control over flight and speed often cut a forlorn figure on the field for Kolkata Knight Riders in 2019. Moeen Ali, the English and RCB all- rounder slaughtered him at The Eden Gardens, the same ground where Kuldeep had Australians dancing to his tune and picked up a hat-trick too, not too long ago.

Quite unsurprisingly, he was not considered by KKR in any of the remaining matches. So, within a year, he had fallen out of favour for KKR and India.Since 2019, he has managed to play just one match in the longest format against England, where he was cruelly underbowled in helpful conditions.

In the 2021 World Cup played in the UAE, India played a huge gamble by picking up Rahul Chahar and Varun Chakravarthy. The move backfired as India couldn’t even reach the knockout stage and both the bowlers failed to impress.

Clearly, Kuldeep was not wanted anymore.

A turnaround was just around the corner.

And, it happened in the 2022 edition of the IPL, where he represented Delhi Capitals. He snared 4 wickets against his former team, KKR and weaved a characteristic web of spin against them, thereby helping his team to win.

Suddenly, the smile was back and so was the beautiful loop and prodigious turn. IPL 2022 can be easily seen as a story of resurrection for Kuldeep. He picked up 21 wickets at a better strike rate than his close ally, Yuzvendra Chahal.

Recently, he played the last T20 against West Indies in Florida. In that game, he bowled with his trademark guile and deception, and picked up 3 wickets.

So, has he done enough to warrant a place in the T20 World Cup, ahead of Ravi Bishnoi?

Probably. Probably not. Well, unless something dramatic happens.

The thing that distinguishes Kuldeep Yadav from the others is his ability to bowl unplayable deliveries. And, where it stands now, he can easily be considered in the ODI format, where he can stick to his strengths and not worry about being slogged. 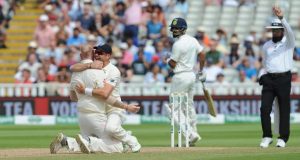 India In England, 2018: A Disaster That Kohli’s Brilliance Couldn’t ...