Shane Warne, the greatest of all time, conceded 150 runs and took only one wicket on his debut against India in 1992. It’s no surprise that cricket has been hard on leg-spinners. It is, without a doubt, the most difficult skill to master in cricket. However, once mastered, it is possible to have over 700 Test wickets in a career. But you’d need to be as skilled as Warne for that.

Can you imagine a guy who pulled out a right-off hander’s stump from behind being gone for 150 runs once? Even Abdul Qadir thought Brian Lara nearly ended his career. That is why a leg spinner is said to have a huge heart.

We witnessed some spectacular leggie deliveries that were a sight to behold.

Kuldeep Yadav bowled Babar Azam through the gate of his bat-pad in the 2019 World Cup. And how can one forget Adil Rasheed’s delivery that dismissed KL Rahul, who was on 199? In the 2019 World Cup, Chahal also dismissed former Proteas skipper Du Plessis with a stunning googly.

The magic of the wrist is not everyone’s cup of tea, only a few are born with it. Anil Kumble, Shane Warne, Abdul Qadir, Mushtaq Ahmed, and Imran Tahir all were great with the wrist, and now, in modern-day cricket, Yuzvendra Chahal is proving to be a terrific one. Although Chahal has some strong competitors in Rashid Khan, Adam Zampa, Ish Sodhi, Adil Rasheed, and others but he has been in top form lately.

Yuzvendra Chahal not only has a big heart but also has an entertaining personality that keeps the dressing room entertained.

Have you ever wondered why Chahal hasn’t received his first red-ball call-up despite his brilliance in limited overs cricket?

Amit Mishra, Piyush Chawla, Karn Sharma, and Kuldeep Yadav all made their test debuts but were unable to secure a place in the team. Or one reason could be that Ravichandran Ashwin, who dominated the other countries with his partner Ravindra Jadeja.

Maybe this has been a habit of solely using the leg spinner in white ball cricket. Not only India, but Australia with Adam Zampa, England with Adil Rasheed, and New Zealand with Ish Sodhi are all doing the same thing. But this is working for the leggies as to manage the workload, players are opting out of one format. You would not want the leg spinners to do the same.

According to the greats, only the one whose work it is, should accomplish it. And that’s what Yuzi Chahal has been doing since 2016, picking up wickets and making his mark in limited overs cricket.

But cricket’s brutality did what it always does. The bowler who has been playing consistently for almost four years is abruptly dropped for the T20 World Cup. The BCCI made a harsh decision by dropping Yuzvendra Chahal and bringing in rookie spinners Rahul Chahar and Varun Chakravarthy, who have not appeared in a single game since the disastrous T20 World Cup campaign.

Yuzvendra Chahal’s career saw a significant fall after the 2019 World Cup, primarily in T20Is. Chahal grabbed only seven wickets in nine games in 2020, with an economy of 9.05. His poor form continued in 2021, and it’s tough to see why a spinner like Chahal was dropped for an ICC event. After a dismal T20 World Cup in the UAE, Yuzi was quickly brought back into the lineup for the New Zealand series.

He had to show the selection committee what they were missing out on, and he accomplished it by winning the purple cap in the IPL 2022.

Not only did he regain his form, but in a way paid respect to the legendary Shane Warne while playing for the Rajasthan Royals and assisting them to the finals. This year’s IPL was a happy meal for leg spinners. Wanindu Hasaranga and Kuldeep Yadav were close to Chahal and picked up 26 and 21 wickets respectively.

How did Yuzvendra Chahal perform in IPL 2022

Chahal grabbed 27 wickets in the IPL and six wickets in the series against South Africa, earning him the player of the match award in one of the five T20Is. He bowled effectively against the Proteas but lacked the confidence he showed in the IPL.

During the England tour, he not only spun the ball but also his luck and claimed 11 wickets, followed by seven in the ODI series against the West Indies.

Chahal Even Combined Forces With Kuldeep To Aid India?

Not to forget, the Indian squad was for a few years reliant on its KUL-CHA mantra and competed in the World Cup with both of them.

Yuzvendra Chahal and Kuldeep Yadav so often played the keys to India’s success in the ODIs due to their ability to take wickets in the middle overs.

Chahal will play a crucial role in the Asia Cup, which begins in a few days. He has a lot of confidence when it comes to looping the ball and taking wickets for the team. What else would Rohit want from his star spinner? Probably, the leg spinner’s hallmark move after completing a hat-trick?

In an ideal world, the captain should not mind that for as long as he is taking wickets. Yuzvendra Chahal has secured a spot for the Asia Cup and the T20 World Cup as a frontline bowler. May he continue to bowl unplayable ones and turn the tide for his Indian team. 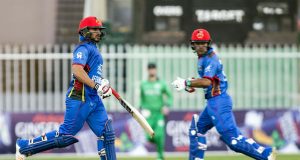 Which Batsmen Determine The Fate Of Afghanistan Cricket In The Future?

Abhishek Srivastava - April 23, 2019
0
Afghanistan cricket happens to be a story that's as inspiring as it is reassuring. It tells us of a simple fact; that one mustn't...