William Shakespeare is an iconic figure in the History of English Literature. His works have always stood the test of time and enchanted people of every social background. A prevalent theme in many of his Sonnets has been the cruel effect of passage of time on human beings, which takes away Beauty, Power and Efficacy.

James Anderson would surely laugh and scoff at this idea of human beings succumbing to the treacherous process of aging.

But, how is that even possible?

To answer this question appropriately, we need to go back in time and trace the journey of James Anderson, the most successful Seam Bowler in the History of Cricket.

England are locking horns with Pakistan at Cape Town at one of the most picturesque Cricket Grounds in the World. England have managed to score a modest 246 against a spirited Pakistan Team whose Bowling strength is equally matched by dashes of experience in Batting which is upheld by the quintessential Saeed Anwar, the classy Inzamam- Ul- Haq and the ever- reliant Mohammad Yousuf.

Task cut out for England, right?

A funky-haired, tall bloke from Lanchashire, England accounted for the Holy Trinity of Pakistan Batting Line-up with a Masterclass of Swing Bowling that too at high Pace. His eventual figures of 4/29 assuaged England’s loss of points against Zimbabwe and also brought their World Cup campaign right back on track.

James Anderson had announced his arrival in International Cricket that evening.

England have never believed in drafting a rookie into International Cricket without making him go through the rigors of playing County Cricket and proving his mettle by bowling long spells against quality batsmen.

Well, in the case of Jimmy, some wise men took the risk of drafting him in the Test Team against Zimbabwe at Lord’s in 2003. He had not even earned his County Cap by then.

On his debut, he ran through the Zimbabwean Batting Line- up with his raw pace and late swing at Lord’s. He picked up a five- wicket haul and promised great things for England.

The decision to induct James Anderson into the Test Team had been vindicated.

The ‘golden boy’ of English Cricket did well in ODIs against Pakistan, South Africa and Zimbabwe. But, in the Test Series against South Africa, Graeme Smith was severe against a young Anderson and he was put under immense pressure.

Subsequently, he was replaced by the likes of Simon Jones, Steve Harmison and Liam Plunkett. As Jones, Harmison and Flintoff led England to a sensational Ashes victory in 2005, Anderson didn’t get many opportunities despite a strong start to his International career.

Anderson’s six wickets in the Third Test Match against India at Mumbai in 2006 gave him the much-needed confidence and allowed England to draw the  series. A horrible injury to Simon Jones opened the doors for Anderson and he hasn’t looked back ever since.

Back to the present.

England wrapped up the Second Test Match against South Africa at Manchester in Three Days with a thumping victory by an innings an 85 runs. It’s a perfect riposte by England to the soul- crushing defeat at Lord’s in the First Test.

Anderson’s overall tally of six wickets in the Second Test backed up the all- round performance by the English skipper, Ben Stokes who was adjudged the Man of the Match. In South Africa’s Second innings, Jimmy went past Glenn Mcgrath’s record of 949 International Wickets as he dismissed Simon Harmer. It was Jimmy who led England to the perfect start in the Second Innings as he plucked Elgar’s stumps clean off the ground with an aesthetically pleasing delivery.

For a sane cricketing fan, it was a major throwback to the times when Jimmy demolished the likes of Tendulkar, Lara, Ponting and more recently Steve Smith and Virat Kohli.

It’s mind- numbing to imagine that Jimmy is the only active player to have woven his wizardry around many batting Legends of the past as well as present. It’s a tribute to his fitness and his desire to get better with age. There is no doubt that he is a ‘timeless’ freak, who has defied the limitations of the Human Body.

In his earlier days, his sense of style naturally brought about comparisons with Soccer star, David Beckham. Notwithstanding the allures of the glamorous world, Anderson has managed to deal effectively with all kinds of distractions and deliver match-winning performances with the red dukes in his hand.

Very early in his glorious career, Jimmy Anderson had to deal with a cruel stress fracture of the back but with strict fitness regime and by sticking to his strengths as a swing bowler, James Anderson has successfully carried the burden of English bowling on his shoulders for close to two decades.

Hey, all the international bowlers around the world.

Bow thine head in obeisance to the Mighty Lord Jimmy Anderson, as there won’t be anyone like him ever.

Ben Stokes, the incumbent English captain too is awestruck at the longevity of Jimmy’s career. His greatest strength over the years has been his disciplined style of bowling with subtle variations. He examines the batting technique of a batsman with ruthlessness that is devoid of any verbal expletives. The smiling figure of James Anderson is enough to spell doomsday for any batsman around the world.

With a total of 174 Test Matches, James Anderson can easily touch Sachin Tendulkar‘s record of playing 200 Test Matches. With the volume of Test Cricket played by England, James Anderson will inevitably touch the magical 700 wicket mark and probably go beyond it as well.

His detractors can still shamelessly declare him as a bowler who only does well in English conditions, but Jimmy has done enough to prove that he is a bowler for all conditions. His record in the subcontinent isn’t a glowing one but is still good enough to warrant apex position in the list of one of the greats of the game.

As John Osborne’s Jimmy in ‘Look Back in Anger’ rants at a disturbed past, Jimmy Anderson can ‘Look back in happiness’ at his transition from an uber-cool English Boy to a sober Gentleman who has plied his Trade with enormous success and  created a stronghold on ‘Swing Bowling’.

The likes of Botham, Mcgrath, Akram can surely raise a toast for Jimmy ‘Legend’ Anderson. 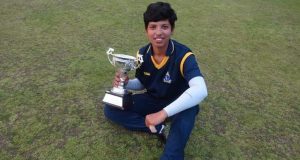