Manish Pandey, captain of the Gulbarga Mystics team, led his team to win the inaugural edition of the Maharaja Trophy KSCA T20 league 2022 by 11 runs on Friday, 26 August.

Gulbarga Mystics locked horns with the Bengaluru Blasters in the Final at M.Chinnaswamy Stadium, Bengaluru.

Opting to bat first, Gulbarga Mystics got off to a boom-boom start with the opening stand of 60 between Jeswath Acharya (39 off 17 deliveries) and Rohan Patil 38 (21).

Dazzling left-handed batter Devdutt Padikkal and Gulbarga Mystics captain Manish Pandey carried on the early momentum provided by the openers till the end.

Moreover, Devdutt Padikkal smashed the supportive innings of 56 off 42 balls while Pandey finished the innings with a quickfire 41 off the 17 balls with a strike rate of 240+.

Man of the match? Manish Pandey.

Man of the series? Rohan Patil.

Cliches be darned, it’s not easy to perform in a high-octane final. And Manish Pandey did the same under pressure.

Why was this inning important?

The Indian team hasn’t won any ICC tournament since 2013, and the reasons for failure in the big games are the same. Senior players like Virat Kohli, Rohit Sharma, KL Rahul, and Jasprit Bumrah, haven’t been able to hold their nerves in the finals of ICC tournaments.

Not so many people know that one of the sharp fielders of the Indian cricket team Manish Pandey’s (19.2) highest Yo-Yo test score is higher than the run-machine Virat Kohli (19), all-rounder Hardik Pandya (19), and wicket-keeper batter Rishabh Pant (17.3).

The 32-year-old batter last represented India in a T20I match against Australia and managed to score only 2 off 8 balls. That was a downer. It really was.

However, what weren’t were performances in the recent domestic T20 league.

And whilst we, at Caught At Point don’t run any ratings anywhere nor are we qualified to “rank” cricketers unlike several platforms who believe they are doing “cricket journalism,” we wish to humbly submit something in clarity.

Here are the scores he managed to put on the scoreboard in the Maharaja Trophy KSCA T20 league:

Love him or hate him, you can’t ignore the hard work showcased by the quiet cricketer on the field. Then there’s that hunger of scoring runs in every innings, which isn’t so hard to gauge.

We can’t predict how the venerable BCCI selectors will see these performances. Of course, none of us can. Yet, what must be submitted in humility is that talents like Manish Pandey should get, at the very least, one chance to represent the country before it’s all over for him.

Surely, at 32, which isn’t danger zone yet, fact is, the Nainital-born isn’t getting any younger. But what hasn’t aged, it could be noted, are things like his timing with the bat and that determination. 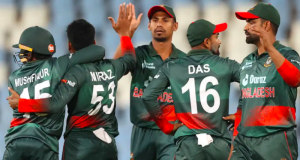 Abhishek Srivastava - March 24, 2022
0
If you happen to pay a closer look at it, you’ll realise that the past five to seven years have been a...