The cricket fraternity witnessed what could be aptly called a SKY-Storm in the 20th over of the first innings during the fourth match of the Asia Cup between India and the promising new force Hong Kong.

Surayakumar Yadav got rewarded with player of the match for his quickfire innings of 68 off just 26 balls.

A blistering knock, a quickfire knock, you ran out of adjectives.

Suryakumar Yadav smashed four of his six sixes in the 20th over. Did anyone see that coming?

But having said that, there was something else in there too that stood out.

Everybody thought that the India-Hong Kong clash would be a one-sided contest. Though, that wasn’t the case. India manageg to win only by 40 runs and if you compare the performance with the Pakistan-Hong Kong match, then Pakistan played much-much better cricket in the do-or-die situation.

India would have lost the match if Sky hadn’t played a gem of an innings.

Surayakumar Yadav, the number 3 batter in ICC T20I ranking, has been making everyone go crazy with his 360-degree batting skills from the very first day of his debut in international cricket.

Recently few famous former cricketers appreciated the young lad for his amazing game awareness and his ability to bat at any number in the batting order.

“I believe if SKY gets the opportunity to bat at number three then it will be better as compared to Virat Kohli,” Gautam Gambhir said during the post-match show.

We understand that Suryakumar Yadav has been in tremendous form and Virat Kohli has been struggling to do the same. But, could the choice of words have been better? Maybe Mr. Rashid Latif could have taken some trouble of digging up his own numbers in white-ball cricket.

Anyhow, we saved you that effort. Here are Rashid Latif’s numbers:

From 166 ODI’s, the Kohli critic amassed 1,709 runs at an average maybe Virat Kohli himself would refuse to comment on: 19!

While not every Pakistani’s opinion of us Indians is stale and does carry regard but what must be given due weightage, especially by Mr. Latif is that Virat Kohli still has a batting average of 50+ inT20Is, which is quite higher than Suryakumar Yadav’s average of 39.89.

Furthermore, Suryakumar Yadav himself is in awe of the giant of Indian cricket.

Kohli has an experience of playing 101 T20Is, whereas Yadav has just played 25 twenty-20 international matches so how would a former cricketer from Pakistan, one who’s actually regarded care to compare the two is something that beats imagination and has little space in logic.

Surely, it’s to India’s advantage especially heading into the T20I World Cup to have a talented batter like Suryakumar Yadav. But how difficult is it to understand that the talented batter is still largely, ‘work-in-progress.’

Time will only tell whether he’ll be able to match the standard that senior have set, but one thing is sure, SKY is following the right path on a long journey even if our friends from the other side of the border are not. 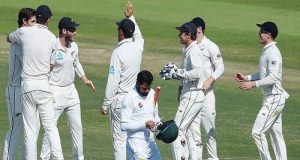