Rohit Sharma still has a few years left in international cricket and hopefully, the same for the Gabbar of Indian cricket- Shikhar Dhawan. If KL Rahul can take care of his injuries, then there’s little doubting that he can fully blossom as a player India need. But a decade back in the day, none of the fantastical talents were around when Team India badly needed a breakthrough and that too, far away from home.

On September 16, 2011, Team India entered the final ODI against England in a series where little went their way. Prior to entering this fifth and final one dayer, with two games already lost to England as well as the rains, typical of the quintessentially dull English weather during this time of the year, India were at the wrong end of the result in Tests.

Having lost every single Test match on that the ill-fated tour to England, a series where neither the “God” Tendulkar, nor the much-loved finisher as also the captain Dhoni came any good, India proved to be a sheer embarrassment to themselves.

As if defeats by a horrible margin of an inning and 242 runs didn’t hurt any less, two of the four one-dayers prior to September 16 added further insult to India’s injury.

But then, on this very day, eleven years back in time, something special happened. And though the end result of this fifth and final ODI at Edgbaston didn’t culminate into a win for India, the visiting side, at least, put on a show when it most mattered.

While none among the troika of Rohit, Shikhar and KL were around at that time in England, Virat certainly was. And while he did fire a quintessentially brave century, a sparkling 107 off 93, the man of the moment was someone else.

It was a man who played his part even in the Tests, scoring 468 runs on his own when much of the team featuring Dhoni, Gambhir, Sehwag and Tendulkar collapsed like ninepins.

These were times where Ravi Shastri eschewed the love for his trademark “Tracer Bullet” to compliment the man India calls the Wall: Rahul Dravid. The former coach said of the current coach of Indian Cricket team: Rahul Dravid has been a real rock for India during this dismal series.

And truth be told, the man who so often went uncelebrated put up a lone fight yet again on September 16, 2011.

Not that his innings changed the fortunes for India, something Rahul Dravid may not have forgotten even today for such was the conduct of the man that his own milestones meant nothing if they didn’t contribute to the team’s cause.

Nonetheless, his batting brilliance in that ODI gave India something to cheer about.

Rahul Dravid arrived at the Sophia Gardens pitch at the fall of Ajinkya Rahane’s wicket in the thirteenth over and became an apostle of sheer determination and forbearance departing not before the forty second over.

In such time, he repaired a sluggish scorecard that from 52-for-1 went to 227-3 in 41.6 overs, to be precise. The Karnataka batter’s contribution was 69 off 79 deliveries, a valiant knock in the circumstances and one that India so desperately needed.

Giving India’s famous number three some good company was the man we can never imagine Cricket in the country without: Virat Kohli.

It was a long time back then. For someone who took nearly three years to hit his 71st ODI ton had on September 16th, scored his sixth with the Wall holding fort at the other end.

The duo dug India out of a precarious situation stitching a priceless 170-run stand during which Virat Kohli’s firebrand batting was evenly matched by Rahul Dravid’s focus and patience.

During this time, Dravid hit some magnificent shots through the covers and backed himself to loft legends like Graeme Swann down the ground hitting gun barrel straight hits to the fence.

But in the end, a career that lived for India also perished for its cause; on a flighted delivery by Swann, perhaps bowled deliberately to tempt the batsman into a big heave, Rahul Dravid danced down the track and completely lost track of the white ball.

Seconds after his stumps were disturbed by a great shapely off spinner, nearly every single member of the English side began to take strides to acknowledge Rahul Dravid’s effort.

His final and not to forget, 83rd half century couldn’t have come at a better time for India; the side so keenly wanted an experienced pro to take things into his own hands and fight it out. And Dravid didn’t disappoint.

Holding their caps in their hands whilst extending a warm handshake to the man clearly considered a legend, England players demonstrated chivalry and warmth.

This was some moment. On the mic, the great David Gower exclaimed the ensuing scenes as, “There’s a wealth of respect for Dravid.. such an ambassador for the game.”

Someone holding a placard said it loud and clear: “The Wall Stands Tall!”

But was that even a surprise? If you wouldn’t take note of a thorough gent like Dravid, then whom would you even recognize?

As he walked back, there were applauds from all sides of the ground. Fans stood united in hailing a batter who strangely even today is considered a lesser mortal in some cricketing circles in India where it seems the tag of greatness was only and exclusively meant for Sachin Tendulkar and Virat Kohli.

Anyhow- each to their own.

For someone who was once tagged “unfit” and “not meant for ODI’s,” Dravid faced 15,284 deliveries in 50-over cricket and wielded a bat for no fewer than 318 times reigning over a career that spanned sixteen years.

Most current Indian cricketers barring the duo of Kohli and Rohit haven’t even touched a decade and may not come close to Dravid’s longevity in a format where he was considered an alien.

He’s the same man, who in the end, not only ended a career with an average of 40 but struck 3,800 of his ODI runs through just boundaries.

So much for ‘not-so-good’ ODI batter!

In a country where, according to some, a famous Bollywood dialogue- “Tumse Naa Ho Payega” (you won’t be able to do it)- summarised the man, Rahul Dravid proved that he could do it all aligning a cherishable combination of the love for rigor and patience.

In the end, he rested his bat being the same man he was once when he first held it: always for the team’s purpose, putting personal milestones at bay.

To a generation that seeks fulfilment on Tinder, meaning of life on forwarded WhatsApp messages and finds communication easy through emojis, Rahul Dravid may be a personality best considered for museums.

And maybe that’s fine for such men don’t come around that often; while they are around, they must be cherished and when the journey’s done, they must be preserved through valiant anecdotes they helped shape by being part of Indian cricket’s courageous history. 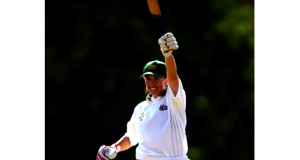 Dev Tyagi - June 25, 2021
2
The Australian women's cricket team has given so much to the sport, measuring the worth of which would create a stockpile of records and...