Every batsman in this great game of ours has his own style. Some have one that’s perhaps more unique than that of the others. And it’s good to have so because we need variety in any walks of life as seeing the same thing again and again would make life so awful-if not just- boring.

Some batsman are grafters, whilst some accumulator. At the same time, there are those who are dashers. Perhaps some of us already know where to place Brian Lara, whose greatness, truth be told, lay beyond his sterling stats.

Maybe time has come to view the Prince of Trinidad from the funnel of exactness that hitherto goes unnoted; that his greatness lay in the fact that he could play every role according to the given situation.

One such situation happened on October 9, 1999, in a one-dayer against the spirited Bangladesh side.

What Brian Lara achieved on this very date, albeit twenty three years back in time is stuff about which saying the following won’t be incorrect:

Few could’ve done what the Trinidadian maestro did.

But up first, some context.

October 9: when an unsuspecting Bangladesh ran into Lara

He could grind all day to save the match or he could produce a scintillating innings to overhaul any target.

One such instance we saw on the 9th of October 1999 at Bangabandhu National stadium at Dhaka when he played a magical innings of 117 against the home team Bangladesh.

Though on that fateful day for Bangladesh at their beloved Dhaka, none could have sensed the storm Lara was about to unleash.

“Really, but just how is that one might ask?”

He reached his ton of just 45 deliveries and it was the second fastest ton of that time. Interestingly, on that lively afternoon, it was skipper Lara himself who decided to open the innings.

But while Brian Lara was in his elements, the Bangladeshis had no idea about the manslaughter the left-hander was about to unleash upon the Bangladeshi blowers.

He rammed them right from the word go and thrilled the spectators in the process with his fierce square cuts and masterly drives.

He pulled anything short disdainfully and in no time reached his hundred and that too of just 45 deliveries (that’s 7.3 overs, to be precise) to score what was then the second fastest ODI century, only just behind Shahid Afridi’s.

It was an exhilarating stuff from the great man and even though it came against minnows of that time the innings meant so much for him as Brian had not been scoring anything to note about in limited overs cricket for the last one year.

He was doing great things in test cricket which he loves the most. The crowd that day must have seen something special and they should consider themselves lucky as no footage of the innings is available on YouTube or any other social media platform.

But I remember that it was broadcasted by ESPNSTAR in Asia so hopefully someday when old archives will be shown we will be able to see the great innings by the inimitable Brian Lara. 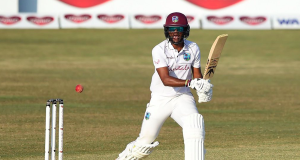