When people talk about the Australian team, they often use the word “mighty”. Without a doubt, they have earned this tag over the years by consistently outperforming their opponents. But what exactly makes them mighty? What makes them consistently outclass other teams? It is their attacking bowling line-up.

The Australian team may struggle with the bat on some occasions, but it’s very hard for the other teams to smack their bowlers.

To name a few, the Australian team has had great fast bowlers, including Glenn McGrath, Dennis Lillie, Jeff Thomson, Jason Gillespie, Shaun Tait, Brett Lee, Mitchell Johnson, Mitchell Starc, Pat Cummins, Josh Hazlewood, and others. Any one of these fast bowlers’ names is enough to make a batter nervous unless he is one of the legends like Sachin Tendulkar or Brian Lara.

With batters dominating the cricket world, the seamers of Australia have always been the ones to disturb even the greatest of batters.

Prior to the start of the ongoing World Cup, the common sentiment surrounding the T20 World Cup 2021 champions wasn’t surprising:

It was felt, “the Australian team appears to be more solid heading into the T20 World Cup, which is being held on their home turf.”

Furthermore, one felt, “they are the top contenders because they are the defending champions and have the advantage of playing at home. Mitchell Starc, Josh Hazlewood, and Pat Cummins are all capable of wreaking havoc in the batting team’s dressing room.”

But then, what’s transpired so far has augured well for Australia given their results but where the fast bowling stands, maybe it’s a conundrum or is it?

The Kiwis have upset the Aussies, but Finch and company will take it as a learning experience and attempt to reach the semi-finals. Anything less than the semis, given this edition is Down Under will be considered a defeat, isn’t it?

Cummins appears to be the most concerning factor for the team, and the seamers must figure out what they can do to get back on track. Let’s see what the management can do after Cummins back-to-back failure in the first two games of the T20 World Cup 2022.

Despite having swing, pace and bounce, what is going wrong for the Aussies

The Australian team is one of the few that uses the same pace attack for each format, which helps to maintain the balance of the team. Cummins, Starc, and Hazlewood have played enough matches in each format to have a skill set that any bowler would be eager to have.

Despite these three speedsters, there is Marcus Stoinis, Cameron Green, Mitchell Marsh and Kane Richardson who can replace or bowl some useful overs if any of the three aces is having a bad day.

Josh Hazlewood has acquired the first spot in the ICC T20I rankings for a while now, which is not surprising at all. Not only he is economical, but he is also a wickettaker. In IPL 2022, the seamer took 26 wickets with a magical economy rate of just 7.43.

His height plays a huge role as he gets extra bounce, and on the bouncy pitches of Australia will add an extra advantage.

Left-arm seamers are hard to get, but if a team gets one, they’ll make sure to preserve his skills. And that’s what Cricket Australia has been doing for their frontline bowler, Mitchell Starc, all this while. Starc and his deadly yorkers will take no time to pluck those stumps out of the pitches. Whether it’s Ben Stokes in the 2019 World Cup or Rory Burns in the Ashes, he managed to nail his swinging yorkers to dismiss both of them.

Pat Cummins, on the other hand, has struggled so far in this tournament. But he has all the necessary experience to carry out the plans.

Because of his destructive hitting abilities, he is a valuable asset to the team, and captain Finch provide him all the backing he needs. Cummins may have a good day against England in Melbourne due to the massive boundaries. Even Bhuvneshwar Kumar was struggling, but he knew what he had to do; the Australian Test skipper only needs a couple of wickets to regain his confidence.

Before the T20 World Cup, Australia hosted a three-match T20I series against England, which turned out to be a great one for Cummins. The right-arm pacer appeared in two games and took two wickets.

In addition, his economy rate was around 7.2, which was better than both Hazlewood and Starc.

Alternatively, the Australian management can play a tactical move by replacing him with Cameron Green or Kane Richardson, who can help address their concerns. Cameron Green could be a fine substitute because he will enhance both the batting and bowling.

Meanwhile, Kane Richardson is not far behind, having taken 14 T20I wickets in 2022, which is more than both Starc and Cummins.

With these golden arms in the team, Aaron Finch and company can become the champions again by defending their title. Looking at the stats of these speed guns in the last year or two will explain how important they are for the men in yellow. If they continue to perform with the same intent and energy, then no one can stop the Kangaroos from defending their T20 World Cup title.

Here’s a stat that will prove nothing but what these seamers have done for their team in the recent times: 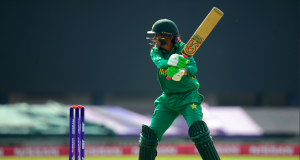 Dev Tyagi - May 23, 2020
0
Social media is a space where memes and trolls run wild. Infrequent but significant are occasions where you come across something meaningful. In an age...