The evolution of Bangladesh’s pace attack has long been a distant dream for the players and fans of the cricket obsessed nation alike.

For a country where spinners can be garnered left, right and centre, the thought of producing an out and out fast bowler is quite a rich ask to say the least.

Add to that the barren pitches that are rolled out in the domestic circuit, which makes it even harder for pacers to break through.

But things are finally looking to change for the better even if by the slightest of degrees. The dream of having a pace attack worthy of winning matches especially on foreign soil is starting to see light. And at the centre of it is the man of the hour – Taskin Ahmed.

As amazing as sporting comeback tales are, Taskin’s return to international cricket last year was more of a story of personal growth than a tale of atonement.

Emphasis on the word ‘return’. Because despite having a bright start to his career, his fitness and form both hit a rock bottom in late 2017.

Losing his pace along with line and length the only thing he was doing was serving hit-me-pies to batsmen.

He was going wicketless and leaking runs like a broken dam.

Fairly enough he was shown the backdoor and asked to rediscover himself through the ranks again.

Taskin was determined to inspire a comeback. But nothing seemed to go his way.

Just when he would start to show some sparks of his potential, his body would let him down.

He experienced an emotional turmoil after missing the 2019 World Cup, and he was on the verge of breaking down when the COVID-19 pandemic hit.

Things got to the point where he started to develop signs of Depressive Disorder and had to consult a psychiatrist. Thankfully things started to get better for him and he was back better than ever.

Amidst all the hues and cries of “finished”, “gone for good”, “one season wonder” and what not, Taskin Ahmed finally returned to international cricket earlier this year against the West Indies – stronger, fitter and faster than ever.

He averaged 140 kmph with the ball that game putting on an exhibit of impeccable line and length. After taking the final West Indies wicket in the ODI at Chattogram he grinned.

After three years of suffering, that smile, however fleeting, may have been more of a sign of relief than anything else.

Fast forward to the T20 World Cup, Taskin Ahmed has carried on his hunger and perseverance to the grand event down under. He is bowling with pace, bounce and above all – brains. Getting the early movement with the ball topped with the signature Australian bounce, Taskin is enjoying life to the fullest.

And why wouldn’t he? Conditions like these are indeed nothing short of wonderland for the Alice inside of him.

Taskin provided an early wicket but was wayward thereafter in his first Super 12 encounter against a very good Proteas side.

But he was quick to pick up the slacks and made a comeback in the next game against the Netherlands.

He was the star of the show as Bangladesh’s quick bowlers excelled in their nine-run victory over the Dutch. His two wickets off the first two deliveries of the innings jolted their run chase and they couldn’t really recover much from there onwards.

Ackermann was the only star with the bat as he batted from the first over to the 17th, only to fall for 62 at the hands of Taskin.

For the third straight game, Taskin provided Bangladesh with yet another early breakthrough against Zimbabwe.

Wessly Madhevere misplayed a shot on a wide short ball and Mustafizur grabbed him at deep third, albeit almost squandering the opportunity with a reverse cup around his chest.

Taskin tried Craig Ervine with a wide-ish ball in his subsequent over which the Zimbabwean skipper nicked to the wicket keeper Nurul Hasan.

It is pleasing to see Taskin has started the campaign on the right path.

What’s more satisfying is seeing him evolve into the attack leader he has metamorphosed himself into especially after all those physical and mental setbacks.

He has consistently hit the mark since the Asia Cup, providing Bangladesh some optimism amidst all the negative T20I results. 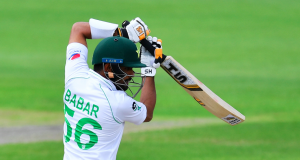