In his short career, Glenn Phillips has already switched his role from being a wicket-keeping batter to a swashbuckling middle-order man who seemingly can destroy any attack on his day; the big challenge, however, is to do it consistently!

Glenn Phillips played two exemplary innings in last two games for his New Zealand. His hundred against Sri Lanka was an inning that will be remembered for long, not because it helped New Zealand win; but considering the stage and scenario it came in.

A World Cup event, a historic ground, a massive crowd with his team staggering at 7 for 2. When it seemed this wasn’t enough, the captain departed soon with the scoreboard reading 25 with 3 down.

But as it often happens, a breakdown is often halted by a complete turnaround. Whe Sri Lanka would’ve thought they were coming close at rattling the Blackcaps, the 25-year-old decided to play a blinder.

With the able Kane well and truly back in the dugout with New Zealand only licking their wounds, along came the fireball; a knock that has perhaps made the world truly notice just what Glenn Phillips is about.

That said, how did the cantankerous thudding of the Sri Lankans happen? Was it any easy for the right-hander?

New Zealand were 25-3 and Phillips in the early stages of his innings. Understandably, he didn’t look any comfortable. He was even dropped by Pathum Nissanka; probably the luck he required in such a situation.

Phillips paced the inning according to the situation; he scored a run-a-ball 22.

But, in the next 17 deliveries, he scored twenty eight, thereby accelerating the run rate.

Was that it; well, he was just getting started.

After reaching his fifty of just 39 deliveries and in the process telling his opponents that he was in it to win it, Glenn Phillips shifted the gears to ensure New Zealand attempted a fighting total to say the very least.

The next fifty came up in just 22 deliveries; he not only hit some lusty blows but impressed everyone with his running something that we tend to ignore in the shortest format. In fact he was seen taking position as a sprinter on the non striker end to ensure that he not only converted singles into doubles and doubles into triples but also made sure that he was not out by mankading.

It was due to his innings that New Zealand ended up with a strong total at the end and ultimately resulting in a strong win.

Against England when the rest of the top order struggled to get going it was once again Phillips who stood up and took a fight against the opposition, during his gutsy innings. His two massive six against Adil Rashid were treat to watch.

However, when it looked that the momentum has shifted towards New Zealand, he was dismissed. The moment he was out the inning crumbled and New Zealand ended up with their first defeat of the tournament.

While New Zealand have a very good T20 team consisting of some big names but it is Glenn Phillips who is their inform batsmen while the others have struggled for consistency, he has been their go to man in terms of their batting. New Zealand would hope that he would continue the purple patch in remaining tournament if they have to progress further.

While a successful World Cup has enhanced his reputation, it would be premature to club Glenn Phillips as the ‘best thing about the Kiwis’ for we know irrationality may save the morning but not the day.

Truth is, there are a few areas where the confident youngster can improve and must:

Whilst his exploits in T20I’s compel one to take him very seriously indeed, Phillips is yet to crack the long form of the sport as also its other limited-over format, where several, not only the great Tendulkar, and Sir Viv have attained white-ball milestones:

With a solitary Test under his belt from which he scored fifty two runs, the world’s his oyster for the attacking batsman.

A look at his performance in 2022 tells the story.

He has been in sensational form this year. Having said that, can we also appreciate the great leveller: Phillips, despite the power, talent and intent knows there’s much work to do.

The Guptills aren’t getting any younger and the likes of Latham need amid them someone who can usher a bright new spark for a team perhaps stupidly considered Cricket’s perennial dark horses when they are so much better. 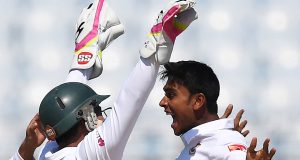 Why Is Mehidy Hasan Miraz The New Big Deal?

Abhinav Bose - November 29, 2018
0
In the checkered and blingy world of wrist spinners in the present context, finger spinners are sadly seen to be languishing at the rock...