Big defeats come with an expensive price tag. Even ‘big’ is a mild word to describe the Indian Adelaide humiliation in the 2022 T20 World Cup semi-final. Sports and fans have a unique relationship oscillating between the extremes of agony and ecstasy. For Indian fans, it was a rare day when their pride and ego felt ‘stripped and paraded’.

Indian cricket is massive. The stronger you become, the more detractors you attract. Contrary to many popular foreign beliefs, BCCI is not equal to ICC, but the former’s importance fuels the latter. For fans as invested in the sport as Indians, life was at least easier in the pre-social media era when the world wasn’t as digitally connected. If trolls across borders and cynics across the seas aren’t enough, the media personnel and several former cricketers end up donning cheerleading roles with a common anti-India sentiment. These are times when you ponder if Elon Musk has made the right call to charge US$8 for verified Twitter accounts.

For years, Michael Vaughan has taken digs at India under the pretext of humour. The former England captain was an exemplary leader, among the most elegant batters of his time and a sound analyst. However, he never misses a chance to express his obsession with India. Criticising the unit for failing to win is absolutely fine, but in the past, he has found villains in pitches and was critical of Deepti Sharma for her non-striker’s end run out. There are other such instances, mostly in the veil of humour.

India’s defeat against England have opened the gates for him. His recent column for The Telegraph is headlined: India are the most under-performing team in white-ball history.

The headline misleads and is factually incorrect. India played their last red-ball limited-overs series in 2000, so let’s peek at the ODI numbers of the 21st century (2001 onwards). India have the third-best win-loss ratio (1.59) in the format, after Australia (2.14) and South Africa (1.71). No team in the past two decades have scored at a better run rate than India, as they are decimals ahead of Australia. Even if I were to mention the overall ODI history, India have the second-best ODI run-rate (5.09) of all time, only behind South Africa (5.13). Even historically, India’s win-loss ratio in ODIs is only next to Australia and South Africa.

In the 20th century, most ODIs were played with the red ball. So, let’s look at T20Is. Among the full members, India’s win-loss ratio reads 2, the best of the lot. They are followed by Afghanistan (1.79) and Pakistan (1.75).

Let’s dive into some of his points from the article and make sense of it.

“India are the most under-performing white-ball team in history. Every player in the world who goes to the Indian Premier League says how it improves their game but what have India ever delivered?” Vaughan writes.

We already know that the first sentence is a lie or made in simple ignorance. Suddenly, IPL comes into the picture. Why? Hasn’t IPL helped India with the likes of Hardik Pandya, Jasprit Bumrah, Suryakumar Yadav, Arshdeep Singh, Yuzvendra Chahal and so on? Vaughan may understand English cricket better.

In 2017, Jos Buttler first opened in T20s in 2011. Five years later, he played two T20s as an opener. Mumbai Indians (MI) made a note from those two less-watched games (one vs Ireland and another domestic) and got him to open in 2017. His strike rate that season from 10 matches read 154. MI were champions. Later, he opened in BPL and BBL with success. In 2018, he turned up for Rajasthan Royals (RR); while opening the batting, he averaged 107, striking at 166. Only in July 2018, a few weeks after the IPL, England finally found a spot for him at the top in T20 cricket. Rest is history.

Ahead of the 2017 IPL auctions, Ben Stokes averaged under 15 with the bat, striking at 136; and 48 with the bowl, going at over nine an over. The then Pune franchise still shelled out INR 14.5 crore for him, making him the most expensive cricketer. He ended up being the most valuable player (MVP) in the tournament.

Still trying to figure out why Vaughan brought in IPL into the equation.

“Since winning the 50 over World Cup on home soil in 2011 what have they done? Nothing. India are playing a white-ball game that is dated and have done for years,” Vaughan adds.

Seriously? To start with, India won the Champions Trophy in Mr Vaughan’s home nation in 2013. If there was any humour in Vaughan’s statement, I missed it, and I apologise. I am sure that the tournament was played with a white ball. And India beat hosts England in the final.

Whether India’s white-ball approach is dated or not, it’s a different argument. India won the ODI World Cup on April 2, 2011. Since April 3, 2011, till date, here are the top six teams in ODIs and how they fared in big tournaments.

England were runners-up in the 2013 Champions Trophy, won the 2019 World Cup via boundary count (which could have been decided by counting pubic hair or sheep), were semi-finalists in the 2017 Champions Trophy at home and failed to qualify beyond the group stage in 2015 World Cup.

South Africa didn’t play any final in any of the major tournaments. Yes, they won the tri-series in Zimbabwe in 2014, with Australia as the third team.

Despite their lacklustre shows in the two Champions Trophies, New Zealand were fabulous in the 2015 and 2019 World Cups. Both campaigns ended with them as runners-up, and in 2019, luck robbed them.

Australia won the 2015 World Cup, were the semi-finalist in the 2019 World Cup and had forgettable Champions Trophies.

Pakistan won the 2017 Champions Trophy but failed to qualify for the semis for all the other three marquee ODI tournaments. They did win Asia Cup in 2012.

A layman, who hasn’t followed any cricket, can derive from the above which side has dominated ODI cricket in this phase.

Talking of T20Is, the below chart does not consider the super-over wins. A tie is a tie.

In the five T20 World Cups played, India were twice the semi-finalists and runners-up once. Out of the two T20 Asia Cups, India won in 2016.

Since 2015, England has transformed into a formidable white-ball unit. On Sunday, they may end up lifting the much-coveted silverware at MCG, something they came very close to at Eden Gardens in 2016. The point to be noted here is: Despite England’s prowess since 2016, they lost all bilateral T20I series (2016-17 in India, 2018 in England, 2020-21 in India and 2022 in England) against the ‘dated’ Indian approach in this timeframe.

Either Pakistan or England will win the silverware on Sunday if the rains stay away. Still, the above figures dismiss Vaughan’s assessment of India. And yes, India managed all these numbers despite prioritising Test cricket, being the most consistent Test side and ruling the ICC Test Rankings for a significant amount of time.

Trivia: England transformed into a brilliant white-ball unit after 2015 World Cup. They are often called the ideal white-ball side. However, during this phase, India’s win/loss ratio in white-all cricket (ODIs and T20Is) reads 2.16, compared to England’s 1.9. So, does Vaughan mean England’s best phase has been less productive than India’s under-performing phase in terms of win?

Other points made by Vaughan.

“Even in their own backyard at the 2016 World T20 they did not reach the final. They were nowhere last year. This time it took an outrageous innings by Virat Kohli, probably the best in T20 of all time, to beat Pakistan in the group stages. They massively underachieve for their skill levels.”

Yes, Kohli played an extraordinary knock against Pakistan. Did India underachieve in the tournament? Debatable because they neither had their best side nor strategy to succeed. More than ‘dated’, it was a wrong assessment. However, discussing 2016, India encountered an in-form West Indies side in the semis that even crushed mighty England in the finale. So, what’s the point here? Also, no team has won the T20 World Cup staged at home!

“How they have not maximised someone like Rishabh Pant is incredible. In this era, put him up the top to launch it… I’m just staggered by how they play T20 cricket for the talent they have. They have the players, but just do not have the right process in place. They have to go for it…”

Yes, Pant could have been used better against the English spinners, and that’s where India strategically erred. Vaughan has consistently expressed surprise over Pant’s exclusion from the XI. But did Pant do enough during the build-up to merit an automatic spot? Didn’t England drop Jason Roy from the squad for losing his form?

India’s process is questionable. The only place where Vaughan makes a valid point, along with the mention of the country possessing an abundance of talent, which takes me back to the point on IPL. He self-contradicts here, and I hope he now realises the importance of the tournament.

“India have to be honest now. What happens when India arrive at a World Cup? Everyone plays them up. Nobody wants to criticise them because you get hammered on social media and pundits worry about losing work in India one day. But it is time to tell it straight. They can hide behind their great players but it is about getting a team playing the right way as a whole. Their bowling options are too few, they do not bat deep enough and lack spin tricks,” Vaughan further wrote.

Correct, India need to be honest here and build a better T20 process. Everyone plays India up because they come in with a reputation, which has been achieved over the years.

And who doesn’t criticise them? I can’t think of any other sporting side as much discussed, loved, rebuked and criticised as India.

And yes, Pundits do get hammered on social media if they make predictions like India will lose 4-0 in Australia after the 36 at Adelaide.

Hero-worship culture in India backfires and probably plays a role in the selection of teams. But when Vaughan calls the players ‘great’, he must realise that these players have earned the tag by doing something worthy over the decade, not ‘nothing’ as he mentions before.

Yes, bowling options were few, India don’t bat deep, and the spinners have been poor. He makes a point here. He probably could have stuck to analysis, avoiding the diarrhoea of exaggeration or misinformation by casually stating ‘history’ to stay relevant. 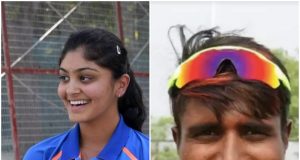 From Gully Cricket To Team India – The Journey Of Komal...

Shruti Banerjee - March 4, 2019
0
India team is currently going through a transition phase. After having won the three-match One Day International series by 2-1, they are heading to...