As a cricket team, West Indies has stagnated over the years, winning difficult matches and soon after that plummeting to new lows. Their inconsistency is the only thing consistent about them.

In a team sport, the Head Coach could play a crucial role in the development of a player by resolving their shortcomings so the players can give their all when it counts. However, sadly, it didn’t happen for the Caribbean team, although for any debacle in team sport, it would be unfair to blame solely the coach, but Phil Simmons could have done more to inspire these young players during their time in Australia.

It was hard for Simmons to ever seem animated. He was aloof and his physical appearance was one of a fatty guy, so he never seemed to inspire anyone. Although cricket isn’t a game that requires absolute fitness, over the years it has evolved to the point that you need to be absolutely fit to survive.

Simmons played aggressively when he was a player and dictated terms to the best bowlers, opening innings most of the time in the shorter format, but as a coach, he did not display that level of aggression and often made a glum face.

According to former Australian captain Ian Chappell, a cricket team does not need a coach because the captain decides what is best for his team’s success, but a coach can certainly be a mentor and help players reach their full potential.

Under the coach John Buchanan, who never played a test match for Australia, the Australian cricket team of the late 1990s and early 2000s enjoyed great success. In spite of the fact that critics here will claim that the success was largely due to the quality of players in the team, it can also be said that he influenced the players to maximize their talent.

The expectations were high when Simmons left his position as Ireland’s head coach in 2015 to become West Indies’ head coach after helping Ireland grow in world cricket since taking over in April 2007.

In 2016, he led the West Indies team to a historic second T20 World Cup victory in India. He deserves all the respect for that.

During that time, he was tasked with bringing the previous top-ranking cricket team back into prominence after many years of struggle.

The fiascos that continued and still do post 2016 triumph

However, soon after the T20 World Cup triumph, the WICB sacked him due to “culture and strategic differences”

The new board appointed Simmons again as West Indies cricket head coach in March 2019, after a controversial Dave Cameroon was replaced as president of the WICB by Ricky Skerritt. Everyone thought that something good would happen to Windies cricket.

Gayle, Pollard, and Russell were not included in the team because Cameroon opposed them. However, the new board and coach supported their inclusion.

While star players were included in the team, results remained the same as they failed to deliver consistently like when playing for their franchise teams.

The blame doesn’t only rest with Coach Phil Simmons

Though In test matches, Windies showed signs of improvement by winning matches in tough conditions like England, but the most notable victory was against Bangladesh, when Kyle Mayers scored a brilliant double hundred to help Windies pursue 395. Despite showing signs of resurgence for a while, they always went back to square one

In the middle, it’s up to the players, a coach can only guide them.

But well and truly speaking, what hurts is that the players keep making the same mistakes and there is no improvement in their technique to counter the opposition.

For instance- Pooran, who we all know is a fine batsman and arguably, the amongst the best smasher of the ball. A player that combines elegance and power in his own way, which is so Trinidadian.

But again- why did Pooran, who by the way hasn’t had a terrible year in T20I’s– nearly 600 runs from 22 games with 2 not outs and 5 fifties- end up offering catching practice in most international appearances this year?

What flight was he missing on the cricket turf, which is where he belongs, by offering silly strokes to the outfield in Pakistan, which is when by staying a touch calm would’ve helped his own team?

Not that his wicket downed the entire team on that rotten tour to Pakistan, where Windies were in contention of victory in nearly every single game against Babar’s men.

Gladly, there was Shai Hope with his beautiful century in the first contest, the first for the Bajan in Pakistan. And moreover, lest it is forgotten, there was Shamarh Brooks, who prior to his 18 in the third ODI, made 70 and 42.

How on earth, and this isn’t an insult, but a genuine question, did Pooran, then as captain, succeed in handing his wicket to the same spinner on every single occasion against The Netherlands?

Which book on batting technique does he have to read in order to understand the simple basic truth that staying calm and hitting against the line of spin seems to be the way to go about things?

If coach Phil Simmons, who didn’t even seem agitated by his captain’s atrociousness with the bat, didn’t Pooran feel disgusted by himself?

How Pooran has led the team down in no uncertain terms

On that very tour where under Coach Simmons’ “watchful eyes” Pooran faltered- and horribly so- Brooks made a 60 off 67 (1st ODI), Hope cracked a quintessentially crafty century (also, 1st ODI) and the likes of Keacy Carty, who, we need to talk a great deal about for his efforts, stood up for the West Indies.

Make no mistake, Kyle Mayers made a rollicking 120, his first-ever ODI ton whilst the likes of Sermon Lewis picked up a three-for and Hosein and Joseph were as per usual, amongst the wickets.

That Windies won against the Dutch, was in some ways, a fine feat. But at the same time, an achievement given the Dutch were visibly more resilient and disciplined, especially in the final ODI, where had they not fallen short by 20 odd runs, Windies would’ve returned with a 2-1 result, which would’ve earned Coach Phil Simmons scorn.

For most regular ICC ranked teams teams would’ve found this Dutch Team that had impactful players such as Max O’Dowd, Vikramjit Singh, Logan Van Beek, Vivian Kingma and not to forget, the now-retired captain Seelaar, a cakewalk.

All of which prompts a question- one would like to know where did the Coach Phil Simmons and Pooran treat the likes of Carty, Hope, Mayers, Joseph, whose timely efforts won Windies a rare series win?

Truth be told, a Mickey Arthur or Dav Whatmore would have given their fair piece of mind to Nicholas Pooran’s spineless batting had they been there, for instance.

So here, the question arises, what does the the Windies coach have to in order to show impact? Surely, he doesn’t need to drive a Tesla on the cricket field.

He doesn’t have to knock every day on the doors of a Chanderpaul or Brian Lara, whom one reckons are still around, in order to inspire a very talented lot that falters, rather shamefully, time and again.

Moreover, it is about time that the Windies supporter go to know that did Coach Phil Simmons take action against a batsman who kept getting out the same way, as demonstrated above or against a bowler who ignores the captain’s field?

Who will notice all this?

The following is a fact that hasn’t yet been denied by the powers that be.

There are many facilities available to modern coaches, such as video analysts, who analyze every player’s strengths and weaknesses, statisticians who can show them their previous performances.

But the Windies, who are fully aware that they have such low success rates, despite all these means, don’t seem to be improving. Are they making full use of these? Is there a cohesive plan in action?

We can go on for an entire day.

Last year, in the T20I world cup at the UAE, they were 55 all out against England. And this year, they got knocked out akin to a baby being mauled by a lion in the embarassment at Australia.

So we need to ask this of present-day administrators and Phil Simmons, the brave and daring hitter back in his heydays, something that mustn’t be ignored.

Is there even a willingness to improve?

In this 2-match Test series against Australia, which as we speak has already begun on November 30, the 59-year-old Trinidadian will leave his post.

For till the time he was here in a critical role, coach Simmons, who by the way says, his decision to ‘quit’ isn’t a “knee-jerk” reaction, the Windies earned their darkest day in ODI white-ball cricket:

As of January 16, 2022, at the back of losing the third and final ODI, West Indies plunged to a series defeat to Ireland on home soil. Such a first! 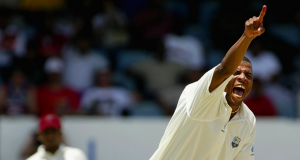 Big Merv: A Man Who Cheerfully Toiled For West Indies And...

Dev Tyagi - June 5, 2020
1
Forget the big muscular batsmen. Forget the sky-touching strike rates or the 100-meter-long sixes. It's fast bowling- first and foremost- that makes you West Indian and...