Brian Lara’s incredible run scoring spree against Sri Lanka in 2001 was one of many remarkable stories from the game of cricket. It is impossible to imagine the many unbelievable things the Trinidadian prince accomplished in cricket, such as breaking Gary Sober’s long-standing record of 365 runs, surpassing Haniff Mohammad’s 499 runs, and even after losing his 375 world record to Matthew Hayden, he reclaimed it in six months by scoring the first 400 runs in Test cricket.

They say life is a roller coaster, and Brian too experienced a lot of turmoil after his initial success. His inclusion in the squad for the tour of Sri Lanka in November 2001 amidst fitness issues caused a lot of talk that he was past his prime. The last time he scored a test century was at Adelaide in December 2000, when he scored an imperious 182. Since then he has done little to draw attention.

Therefore, one needn’t be an Akash Chopra or Ian Bishop to assess there was anyways a lot at stake for the leftie in the Sri Lanka series.

While Lara never answered all the criticism he faced at the time, he said he is still capable of being the best and looks forward to scoring some runs in Sri Lanka. After a series of lean periods over the years caused his test match average to fall to 47, he set a goal of returning to the club of players with 50 or more averages. In order to achieve his target, Brian had to score 647 runs in 3 test matches. This was an uphill task, but he never gave up and world cricket knew that if he set a goal, he could achieve it.

A series of three Test matches between the West Indies and Sri Lanka began at Galle after much bickering, palavering and uncertainty. Last time Lara played Muralitharan, he had been learning his craft and had not yet become one of the world’s best off-spinners, but since then he had made great strides. It was going to be a gripping contest between the two, and with Murali playing on those slow, turning tracks, Sri Lanka had the advantage.

When the great man arrived at the crease, West Indies were 95 for 2 in their first innings on Day 1. He had a hesitant start against Murali but gradually found his footing and his innings flourished later on. Despite the hamstring injury, he looked hungry for runs and pounced on anything loose that was thrown his way from Chaminda Vass and Muralitharan, and during the close of play, he fulfilled his pre-tour promise to make some runs in Sri Lanka, smashing his 16th Test century on the opening day in Galle.

Lara making a comeback and that too with a vengeance but fans couldn’t  see him on TV was a tremendous disappointment that time. The respective broadcast companies failed to come up with a formula to allow the supporters of West Indies cricket to experience this spectacle live-what a shame.  Here in India the legions of Lara fans couldn’t watch his exhilarating batting in the first two tests of the series.

Although, the Test match was shown live on TV; Brian Lara scored 178 and 40 in the first test match but his efforts went in vain as other batters failed to support him and the bowling lacked penetration on docile wickets.

In the next Test at Kandy most of days were washed out due to rain and when play did get underway home team, dominated once again with bat and ball but Brian was so focussed that he single-handedly thwarted back the Sri Lankan attack as he scored 74 in the first innings and when was looking all set to save the match on Day 5 an umpiring error cut short his innings for 45.

West Indies were on the verge of another whitewash when the teams reached SCC Colombo for the third and final Test of the series.

Expectedly, all eyes were on Brian Lara again to salvage some pride for his team.

Imagine what might have been had the series featuring some cricketers with redoubtable talent, think Murali, Vaas, Gayle, Sarwan, Sanga (who was a cricketing newborn back then) been broadcasted?

The man who was struggling at the start of the series against Murali was now in full control and made him look clueless. He dominated every Sri Lankan bowlers in the test match and score 221 in the first innings and 130 in the second to announce his great comeback to the cricketing world.

But sadly despite such herculean performance he ended up on losing side as Srilanka wrapped up the series 3-nil. Here are some statistics before the start of the series which speaks volume of Lara’s remarkable talent.

Prior to this series, he had played 141 innings in 80 Test matches and scored 6460 runs with an average of 47 that means he needed 640 runs in the series to get back his test match average to 50 and that’s not any easy task at all against the likes of Muralitharan and Vass in their backyard but Brian Lara lived up to his words and scored 688 runs in six innings of the three test matches at an average of 114.6.

He is a team man and looked dejected while receiving the award for player of the series and said that he wanted to win test match for his country and would love to give all his runs in lieu of a test match win. This series will always be remembered for Lara’s second coming and the manner in which he annihilated Muralitharan, one of the greatest off spinner the world has ever seen. 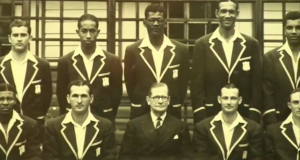 Who Was Lancelot Pierre And What Cut Him In A Different...

Dev Tyagi - June 5, 2021
1
The tale takes us way back in time. Sir Curtly Ambrose wasn't even born then. Ditto for the great Courtney Walsh. The likes of...