It’s not a great sight watching Shikhar Dhawan struggle these days. The left-handed opener, who used to cream bowlers through the covers for fun, has been a pale shadow of his former self for a while now, finding it hard just to get going.

Dhawan is currently playing in the ODI series in Bangladesh and has scores of 7 off 28 and 8 off 17 in the two matches he’s played so far. Even if he manages to blast a 70-ball 100 in the last ODI, it won’t magically brush away his issues. He even struggled in Zimbabwe earlier this year where his strike rate was 76.23 while Shubman Gill, his fellow opener in the series, played at 120.68 at the other end.

The problem with Dhawan these days is that he’s playing like an anchor at the top, which has never been his primary role. He fails to get moving at the start, particularly against genuine pace bowlers and keeps plodding around in the hope to make up for it later. This approach has worked for him on a few instances this year – the 72 off 77 balls against New Zealand at Auckland in November, where he was 23 off 44 in the 14th over, being a prime example – but it does tend to cost India a healthy Powerplay score on more occasions than one these days.

India could have afforded to persist with Dhawan even with his current failings, just for his experience alone. After all, the man has close to 7,000 ODI runs in his kitty with 17 hundreds and has been a beast in ICC events. But the problem is India has a younger, more dynamic opener, fresh and ready to go in Shubman Gill.

It’s not as if Gill is a basher, à la Jos Buttler or David Warner, but he’s been a lot more proactive at the start of the innings and has looked at ease while facing off against the faster men.

Also, Rohit Sharma, who’s certain to be India’s main opener in the upcoming ODI World Cup next year, takes his time in the first 15-odd overs before opening up. Can India afford two openers playing with an anchor-type mindset? The issue is further compounded by the fact the batters to follow the openers are Virat Kohli, Shreyas Iyer, and KL Rahul, all of whom take their time to build the innings.

Having your top and middle-order crammed with slow starters simply isn’t a viable option in 50-over cricket anymore.

Some might say that numbers don’t tell the full story. True. But anyone who’s observed Dhawan closely during the last 24 months would know he’s far from the batter who once dominated pace bowlers with those fierce square cuts and the disdainful flicks over square leg.

These days, one can easily note the pattern in his uncomfortable stays at the wicket – he starts off slow, tries to cut the fast bowers through the covers and rarely succeeds, then keeps prodding around for singles while consuming plenty of dots for a while before submitting to a false stroke.

The flow just isn’t there; we might see flashes of it on and off, but his best days are likely behind him. Sadly, age isn’t on his side either as he will turn 38 next month.

As great a servant as Shikhar Dhawan’s been for Indian cricket, it’s perhaps time to thank ‘Gabbar’ for his services and allow the younger men to take over. 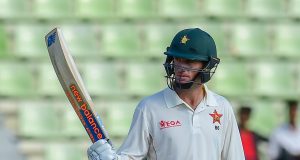 Sean Williams: An Appreciation Of A True-Blue Zimbabwean Hero!

Abhishek Srivastava - March 31, 2021
2
It has been hard playing cricket for Zimbabwe; there have been less rewards, political troubles interfering in the way of the sport and thereby,...