A victory for Blind Cricket in any contest, regardless of the number of overs, venue or opponent, is a victory for Cricket itself.

This isn’t moral preaching; this is merely upholding a universality of a fact.

That for as long as it moves hearts, builds communities and gets people together, Cricket wins in the end.

Isn’t that what the T20 World Cup 2022-  engineered and spirited- by the Cricket Association for the Blind in India and the Samarthanam Trust about?

So as the Proteas take the field at what’ll be a massive contest and lest it is forgotten, test of nerves against Sri Lanka on December 9, there’ll be hope that Cricket wins.

Truth be told, in each of the 20-a-side contest that have happened thus far- Blind Cricket has won.

It’s the ultimate winner, whether at the behest of a South African, Sri Lankan or, a Bangladesh victory.

But as South Africa take the field in what’ll hopefully be another lush green and ideal-for-Crick venue here at the famous Sirifort ground, the team from the land of the Protea fire will be vary.

Or shall we say, a touch cautious?

It’s simple. It’s all in the math.

The last that the two faced each other, which was in the 2017 World Cup, Sri Lanka came on top of the South Africans.

It’s not that South Africans didn’t try; the passionate side that gives its everything until the last ball is bowled came ninth in the tournament.

The thing to note, however, is that there were as many as 27 sides that played the previous edition of the World Cup for the Blind.

By that logic, South Africans struggled but didn’t do as terrible as what one would note.

Though here’s something the side from the land of the great Sonwabile Bidla would be mindful of.

It would be a fool’s errand to take the famous side from the sub-continent any lightly.

And going by their penchant for fighting fire with fire, the Proteas aren’t going to do that.

They might be considered the underdogs, which is what the general feeling in this year’s World Cup suggests.

But in more ways than one, it’ll hopefully be just fine.

The Proteas just beat the Aussies and that too, far away from the home comfort.

For a side so often considered redoubtable and powerful, the Australians had little answer for the Isaac Bidla-led show with the bat.

The Proteas won by five wickets with nine deliveries to spare.

One certainly hopes that the man behind the 70 off 45 deliveries continues the show and the team behind the incredible show of agility in the field keeps up the good work.

It’ll be needed. Much needed.

Is that all? Hardly!

Whether it is Siyavuya, Johan, or Sphelele, all of whom have produced magic with the ball and are capable of turning the a game at the back of a single over, will be expected to outperform a side none would take any lightly.

The Sri Lankans are a fine fine side. They’re incredible. But again, who says a mountain can’t be moved.

Isn’t that right dear fighters from the Madiba-land? 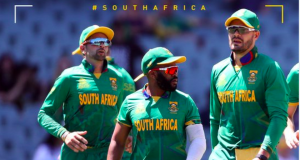 Pranay Rangra - November 6, 2022
0
Will we make it? This is the question every Protea fan including me had at...