South African in 2022 was a tale that captivated but akin to that page turner that few can write and even fewer can take one’s eyes off from.

Well, South Africa is one of the most diverse countries on planet earth, be it in language, the geographical terrain and of course race.

Well one more trait that justifies this diversity is emotion. Emotion of the everyday South African that keeps fluctuating amid the rising unemployment, the dwindling power structure, the rampant corruption and to top that all the unabated crime.

With all due respect to this great man, has sport particularly cricket in the year 2022 truly alleviated the misery of the Mzansi faithful?

Well, the answer is a vehement No. Perhaps, some would argue there have been shades of inspiration though.

Inspiration of the greenery demonstrated in beating India and Bangladesh at home in Tests earlier this year amid the large fields of barren performance ploughing 2022 with a test series loss to England and infamously exiting the T20WC at the hands of the sizzling Netherlands.

To add to this, the latest debacle being the abject surrender to the Australian side in just under two days in the first test down under.

Such has been the disillusionment shown by the Protea batters in the five-day format that they unfolded below 200 twice in the recent test in Brisbane en route to racking up a notorious landmark of being dismissed sub 200 eight times this year.

Well, the highest by any South African team in a calendar year and let that sink in.

Some might say the pitch at Brisbane was one of the toughest to play on, but the fact is there is a huge difference between the quality of South African domestic cricket and the step up to the international scene resulting in most of the batters struggling. Cricket South Africa really needs to improve their domestic structure and pitches if they harbour any ambition of producing world class batters.

To put things into perspective only two Proteas have surmounted the three figure mark in tests this year, those being Sarel Erwee and Kyle Verreynne.

On the positive side though, amid these rather disappointing test series episodes, there has been a glimmer of hope in the shortest format with the rise of Reeza Hendricks and the glorious comeback of the southpaw Rilee Rossouw.

Both the batters were instrumental in South African beating England in the T20 leg of their outbound tour with the former scoring four fifties in his last five T20 innings and the latter mounting two centuries since his T20 comeback earlier this year.

With this positivity in outlook, let’s look at what is in store for South Africa as 2022 draws to a close and 2023 beckons:

Despite losing the first test in the three match series, the Proteas still have two more tests to show their metal. The bowling has been world class but it’s time the paltry batting display is resurrected. South Africa have to win at least one of the remaining two tests to harbour any hope of still being in contention for the World Test Championship Final.

After two failed attempts in introducing an exhilarating T20 tournament the world can take note of, Cricket South Africa finally seems ready with their version of the IPL called the SA20. With Betway, Supersport, and CSA being the main money providers and the IPL owners helming the six franchises boasting South African and international stars aplenty, this tournament should most definitely attract eyeballs.

This series is crucial for the Mzansi against the reigning T20 WC Champions to directly qualify for the ICC ODI World Cup. If the Proteas fail to win this series they would in most likelihood have to go through a qualifying tournament in Zimbabwe for the World Cup.

The Proteas will have to put their best foot forward in the Test leg of this series as the chance for the World Test Championship final will be at stake. Along with winning at least one match in the three test series against Australia, South Africa would have to beat the Men from the Caribbean to be on the flight to England.

The Proteas would be looking for revenge against the Men in Orange who were instrumental in yet another disappointment for the Green and Gold at a major ICC tournament.

Another opportunity at a global event, another glimmer of hope for the die-hard South African faithful. Perhaps, this time even the almighty would agree the wait has been a bit too much.

With so much cricket to look forward to for the South African fan, one would surely hope 2023 is the year to be bedazzled rather than getting puzzled as was the case in 2022.

The sentiment is echoed by an intrepid cricket fan who also happens to be a South Africa faithful. 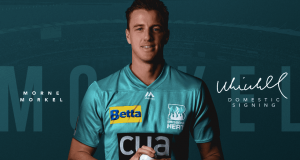 Not Just Mighty But Tireless: Brisbane To Have More Heat Thanks...

Pranay Rangra - November 6, 2020
0
It’s not often that you see a person from one country, playing as a local in another country’s league. Surely, the Kolpak is an exception...