Well, this is the question every Protea faithful has on his mind in the aftermath of the thrashing the Men in Green and Gold received in the recently concluded Boxing Day Test by a whopping innings and 182 runs against Australia.

That too, after South Africa had meekly surrendered the first test and have now gifted the series to the Baggy Greens down under for the first time since 2005-06.

To put things into perspective such was the dominance the Proteas had in Australia but alas no more.

The fragilities of the South African batting is for everyone to see much akin to the intent of the politicians in that country who have no desire whatsoever for providing basic necessities let alone a good quality of life to the commoners at large.

The Protea batters collectively haven’t amassed the basic landmark of scoring more than 200 runs in an innings on the last seven occasions before they barely managed to just beat this deplorable milestone in the second innings of the ill-fated second test against the Australians.

Dean Elgar, the man at the helm of the Proteas has played a massive role in this downward spiral with not scoring a fifty in his last 10 innings going all the way back to the series against Bangladesh earlier this year.

His lack of runs has also undoubtedly affected his captaincy with the man being at sixes and sevens in the last two series losses against England and Australia.

Rather than showing intent to rally his troops, Dean has demonstrated the lack of motivation to his rather inexperienced batters who are desperate to make a mark at the pinnacle of the cricketing fortitude, the mighty five-day level.

With such atrocities surrounding the skipper, one should definitely ponder is Dean Elgar worthy enough to lead the Proteas going forward as their captain?

The answer is certainly not a straightforward one with the lack of depth when it comes to astute and competitive talent in the South African structure.

Also the fact that Cricket South Africa has showered their priorities on SA20 (their answer to the IPL) is not helping the Proteas’ five-day cause with the team only scheduled to play 28 Tests in the next four-year cycle, no three-Test series going all the way to 2026, and only four Tests in the new year that is upon us.

For now there is one test left in this disaster of an Australian tour and Elgar is still the man in charge. National pride and a chance to make it to the World Test Championship final still beckons.

The question, do Dean and his troops have it in them to leave the Australian shores with their heads held high?

Well, as an intrepid South African supporter, along with the 60 million Mzansi faithfuls back home, one hopes that the powers that may all the powers that be knock on the heaven’s door to harbour a small ray of light in this long, dark tunnel that just doesn’t seem to end. 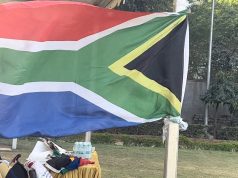