It has been that year where we have seen some major upsets by teams the world considers as ‘underdogs’ Ireland defeating England, the Netherlands eliminating the mighty Proteas from the World cup but did all this happen overnight? Are these teams really underdogs?  Well that will be a different debate but what we have seen definitely tells us these teams got so much more that we see.

This was not the first time that England had to face defeat from their neighbours in a World cup encounter, the Irish had done this back in 2011 World cup in Bengaluru in group stage match. Although lot has changed since then, 2022 has been a year for Ireland where they have faced some challenging oppositions like West Indies, India, New Zealand, South Africa and Afghanistan.

They got off to a great start by clinching the ODI series against the Windies where everyone was seeing the Caribbeans as the favourites. Next up was India but this time it was not going to be that easy, they had some work to do here and indeed they had done. Ireland losing the games by narrow margins which had surely given them a boost in confidence which was clearly evident in their next challenge.

The New Zealand ODI series was a treat to cricket fans, there was not single game that had not gone to the wire. The Kiwis had to go all in to be on the winning side. The Irish bowlers hitting the right length, batters scoring big runs putting a great fight. The T20I’s although were dominated by New Zealand.

Truth be told, Ireland couldn’t win a single game in both formats, but it was more about what they were taking from it. The South African series didn’t bring much joy as they Proteas registered a 2-0 victory.

The Afghanistan series brought some action as Ireland won the first 2 matches followed by Afghanistan winning the next 2. The last one was the decider and the Irish were on the winning side. It has not been a team where only handful have fired but rather a team whose strength is all their players. Match practice has proven to be the key to success.

Their T20 World cup run was not very a impressive one, they could only win one of their group matches although defeating England remains the highlight.

Ireland have Zimbabwe & England series lined up in 2023. It’s a great opportunity for them as they play big team apart from the ICC tournament and increase their improvement rate.

Playing more and more series like these can put them in a position were they won’t be seen as an underdog anymore. As a test playing nation they need to play more test cricket, a department many experts will agree they lack on, this is going to help them in cementing their spot on the cricket map. 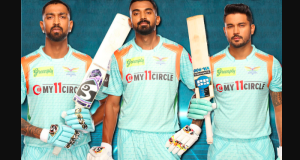 The Big Positives Lucknow Super Giants Can Take Away From The...