England under captain Ben Stokes and coach Brendon McCullum seem to be writing an exciting new chapter in Test cricket history, and whether you like their approach or not, they sure are succeeding for now. And how! Since taking over at the start of the summer, McCullum and Stokes have overseen nine impressive victories in 10 Tests. That’s a nice improvement from the team’s horrendous run of one win in 17 ever since ‘Bazball’ arrived, isn’t it?

It started with stunning wins over New Zealand and India earlier this summer where, led by Jonny Bairstow’s brilliance, they chased down targets as if playing a shortened 50-over game, and then rolled over South Africa despite a minor hiccup.

Currently, this English side is basking under the glory of a successful 3-0 thrashing of Pakistan in their den – a feat no previous captain had achieved on Pakistan soil before. It was a proper decimation where the home side could never recover from the relentless Bazball onslaught.

If you thought those ridiculous run chases at home were an aberration, England showed it’s not letting go of their Bazball approach when they clobbered a record-breaking 506 runs from just 75 overs in the first day of the first Test in Pakistan. They maintained that momentum right through and ended the series with a ridiculous run-rate of 5.50 an over – the highest run-rate ever by a team in a Test series. Just so you know, their run-rate in the 3-match Test series against South Africa and New Zealand at home was 4.09 and 4.54 respectively – against bowlers like Kagiso Rabada, Anrich Nortje, Trent Boult, and Tim Southee. In the rescheduled 5th Test against India in July, they maintained a run-rate of 4.79 against Jasprit Bumrah, Mohammed Shami, and Ravindra Jadeja. Phew!

And if you think Bazball is just about explosive batting, it’s not. England have bowled out their opposition each time they’ve taken the field under Stokes and McCullum. Moreover, they have taken 190 wickets in 19 innings at an average of 28.47 with Stokes as the captain.

Clearly, Bazball is an era of endless aggression and invention both with the bat and the ball. But is it sustainable?

The real, or rather the litmus test for this team, will start in June next year when Australia arrives for the Ashes in England. Will Bazball be effective against the likes of Pat Cummins, Mitchell Starc, and Josh Hazlewood? Will this newfound red-ball resurgence help them reclaim the urn by beating Australia for the first time since 2015?

Also, one must take note here that England have played 8 Tests at home and only 3 away in this period. In almost all those 11 tests, the pitches were rather flat. That doesn’t diminish their achievement, of course, but it would be interesting to see how Zak Crawley, Ben Duckett, Harry Brook, and Jonny Bairstow – heroes of the current Bazball era – cope on the dustbowls in India against Ravi Ashwin, Ravindra Jadeja, and Axar Patel. That challenge is still some distance away – in 2025, to be precise – but it sure is a mouth-watering one.

If they keep on with it and keep on succeeding, will other teams follow suit and start emulating Bazball? Is Test cricket as we know it, about to change forever? Interesting times ahead indeed.

On a side note: as impressive as Bazball has been, one wonders how the Western media would have reacted had, say the West Indies, instead of England, would have suddenly started this ultra-aggressive approach in Tests under Chris Gayle as the coach. One suspects a lot of eyebrows would have been raised then and the method would probably have been dismissed as “just not Test cricket” or “the murder of purest format”.

Regardless, we can’t deny that McCullum and Stokes have instilled some extra dose of thrill in Test cricket. Whether they can sustain this audacious style remains to be seen, but for now, let’s just sit back and enjoy the rush that Bazball offers. 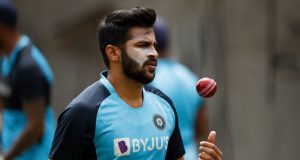 Shardul Thakur Is A Case Study In Self Appraisal

Babasish Nanda - September 7, 2021
0
Nothing wakes up the yawning back alleys of Borivali as cricket does. So does a cup of tea, sometimes.The afternoon tea in...