In the Summer of 1997 , Michel Atherton’s men, who were deemed to be better than the previous English teams, were aiming to become the first English side in a decade to win the Ashes. However, little did they know their dream would be tethered by a gritty knock by an old nemesis: Steve Waugh.

For the English Cricket team of 1990s , Waugh Brothers were like show-stoppers; a bunch of men you just couldn’t beat no matter how hard you tried. There were numerable moments where both of them had been responsible for taking the ‘Beers out of the hands of English players.” Especially, Steve Waugh, who established his sovereignty over world cricket 10 minutes prior to Mark.

Together, the dynamic Waugh brothers- Mark, an elegant timer and, Steve, the doggedly determined continued to bully the English for over a decade and a half of grittily contested Test match cricket.

But for England, a moment of real torment came in 1997.

In the summer of 1997, when England headed into the Third Test at Manchester 1-0 , it looked like Mike Atherton would not have to get compared with Geoff Boycott’s grandmother again- where captaincy was concerned. So when Mark Taylor elected to field on a juicy pitch , it looked Atherton’s stars were at last, in the right place. With English bowlers firing all cylinders up and Australians all messed up, it seemed, finally, at last England were on the road of parity.

Signs were ominous of England redeeming themselves from decades of thrashing. The urn, it seemed, might well return to British shores.

Undefeated in last eight tests , England were riding on high spirits after whitewashing Australians in One-day series and then handing them a massive defeat in the First Test which gave them enough reason to believe this Ashes Series was about to be different.

Indeed, England had a brilliant start once again in this test as well but once Steve Waugh arrived on to the crease, he put a stamp of authority on the contest. From there on, the contest seemed more like Australia playing the ringmasters taming a recalcitrant English lion.

Interestingly, Steve Waugh’s arrival in the middle wasn’t in the best of circumstances. Australia were already in trouble on the first day with the scorecard pointing to a miserable 42-3. England spectators, you could feel, were all joie-de-vivre. Who would’ve expected Australian counterparts to be on the wrong side of the coin? One wonders, had Atherton himself had predicted such a sultry start for his bowlers?

The play till then was totally dominated by an impressive Dean Headley who was making his debut. With cricket flowing in those nerves, being the grandson of the great Sir George Headley , he started off with a smearing bouncer. It hit Australian Captain Mark Taylor on his helmet as if it he wanted Taylor to wake up mostly because till then, it had seemed to most watching, that the decision to opt to bat was made whilst napping.

Little did anyone know that it was masterstroke of Taylor who wanted his kingpin Shane Warne to bowl last on a pitch that looked it would have more assistance for spinners than snow during torrential Icelandic winters.

Waugh added a fighting 43 with opener Matthew Elliot but Australia continued to lose wickets inspite Waugh standing like rock at one end. He continued to miss the edge, looked fragile and hardly in control against Headley and Andrew Caddick, both of who knocked him five times in the series. But Waugh won’t budge.

He can be fidgety. But never lacking in spirit. Soon, he would seem more determined with every passing minute on the crease and looked far better than most Aussie batsmen. His highest score, until Steve Waugh arrived this time around would be a lowly 33. This depicted a trot of miserly scoring where past 6 innings were concerned.

England had Australia under control with 160-7, but Alec Stewart dropping Paul Reiffel for 13. From thereon, fans would sense a change on the cards. The drop-easy as it seemed- would be termed the drop of the summer which turned the momentum toward Australia’s throes.

Reiffel contributed an important 31 to a very vital 70 run stand with Waugh. The former Australia captain did all he could to hold on to a tricky wicket offering little assistance for batsmen. He ducked, braved bouncers, made good utilization of the crease and stayed, for most part of his knock, on the backfoot.

By then Steve Waugh had completed one of the finest centuries of his career, a century showing his determination, skill and above all- a wide range of strokes. It wasn’t always that one saw Australian batsmen scuttle out like falling nine pins. But implicit in Waugh’s long career- his best would often be tied to testing circumstances.

Waugh would later term it his finest test innings; better than match-winning 200 against West Indies in 1995. By the time he was undone by Darren Gough’s excellence, he had taken Australia to a challenging total in very testing conditions.

Australia won the contest riding on Warne’s genius who defied English batsmen once again as Steve Waugh hit another century in the second innings and become first batsman in almost 50 years to hit twin hundreds in an Ashes test. Quite remarkable for a batsman who lacked the natural flair his brother possessed.

As fans you wondered, what magical mushrooms was Waugh on? Ever a careful selector of strokes, someone who fashioned his knocks with patience rising ahead of fluency, on this occasion, Waugh hid more aces up his sleeve than England could’ve imagined.

However, it would be Waugh’s first inning hundred that would go down in pages of history books as an innings of character and grit bearing all hallmarks of Waugh’s legendary personality. Eventually, Australia won the Ashes by 3-2.

A question still bugged the minds of feistiest of critics.

Had Australia lost the test at Old Trafford, would they have been ever able to win the Ashes of 1997? 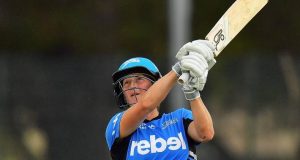 Sophie Devine – The Storm That Breaks Records In WBBL 2019

Shruti Banerjee - December 7, 2019
0
How many all-rounders have you seen so far who have been making headlines with both bat and ball? One's sure you might have seen...