If India in England in 2018 could be stated in one word then probably it may not be wrong to call it Virat Kohli excels, others in hell.

Virat Kohli is playing some magnificent cricket in all three formats. We’ve just seen an indication of it during India in England in 2018 series. Isn’t it?

Seldom do we find an individual blend of dedication, fortitude, and of course, grit.

While perfection, as they say, is a myth, rare are those occasions where a blend such as this culminates into a state of near-perfection.

If you were a cricket fan and someone who cannot imagine the game minus the current captain, then you’d find this rarity befitting only one man.

That man is Virat Kohli.

Every time we see that man perform his heart out, we find that the national crest is shining richly on his chest. He wears it proudly; it’s evident in the passion that Virat Kohli brings to the game. It did so during India in England in 2018.

His work on and off the field probably may not suffice to prove his stature, but his “belief” spurs those around him.

This time around, in England, his bat poured runs when others’ ran dry.

Perhaps to even the staunchest of critics, he might have appeared as the rescuer in-charge for India when Jimmy and Broad, coupled with Woakes and Ali went full throttle.

However, with almost everything falling into place for Virat personally, he seems to have missed the passion from the men at the other end.

What exactly happened to them?

Even to the most untrained eye, the rest of the team’s obvious struggles were as evident as the sight of a heavy outpour during peak monsoons.

Before the captaincy baton was handed over to Virat Kohli, it was believed that India losing overseas was largely owing to their bowling and less because of their collective team effort.
Since 2015-16, there seems to have been a paradigm shift as bowling looks stronger.
So what about the batsmen?

The likes of Ishant, Shami, Bumrah, Bhuvneshwar Kumar, and Umesh all have been able to pitch the ball in right areas and pick those 20 crucial wickets. On the other hand, Ravi Ashwin, Ravindra Jadeja, and Kuldeep Yadav have spun the ball even on docile and non-spin-friendly tracks which speak volumes about their character and skills.

So if the bowling’s holding itself fine, what’s happening to the batsmen? Could it be due to them being the weaklings that India are losing overseas?

Prior to the start of the English series, there was a lot of talk amongst ‘people’ who served sermons on Virat.
Suggesting that Virat, at his best, had only scored those 134 from 10 innings in 2014 would struggle in this most-important series.
What followed was nothing short of sensational.

Scoring 593 runs; the highest from either side not only exemplified that Virat Kohli can singularly turn things around but also that he is able to tinker with his batting technique according to the changing conditions.

It was also said that opener Murali Vijay, Vice-captain Ajinkya Rahane, and reliable Cheteshwar Pujara would turn out to be pure match-winners for India, keeping in mind their 2014 tour performances.

Kohli notwithstanding, and that solitary fifty by Rahane and that fine hundred by Pujara out of context, India were, at their best, a wayward looking unit.
On the one hand, Vijay failed miserably, on the other, Pujara and Rahane were unable to keep their form in the whole series.
The duo did score runs but those came against an abrasive technique.

In case, one forgot the extent of India’s batting woes, this might suffice.

Both, against South Africa and England, the called ‘defining series’ the trio was not at their best, and in lieu of which the burden of runs and wins was well reflected on Virat Kohli’s shoulders. With Australia series scheduled to happen later this year, it’s important for batsmen other than Kohli to start believing in their capabilities and skills.

Has the trio done enough to stay in the mix?

Of lately, the Board of Control for Cricket in India (BCCI) management and the skipper are backing Hardik Pandya to do well in the longest format. Although the 24-year-old lad has impressed everyone with his skills in white ball cricket, he hasn’t been able to replicate the form in five-day cricket. His first impression in Sri Lanka in 2017 at Galle International Stadium led a hard strike in everyone’s head, however, what followed just after in 10 Test matches he led every cricket fan bamboozled.
His on and off performances with both bat and ball have made more news than anything else. With Indian Cricket investing so much on this talented youngster, it seems to be high time for him to start being consistent across all three formats.
Performances in South Africa and England:

Should Indian Cricket back him for Test in future? Thankfully, that’s a call that adoring fans don’t have to take.

There hardly being a dearth of talent, it is time for consistency to up the ante for this team.

Another series going against India’s favour, it will be interesting to see if this side can learn from its past and current mistakes to produce noteworthy performances in the future.
While winning at home is easy, it’s countering alien conditions that truly underline the potential of a side.

Will we be able to see a different side of this Number One Test Ranked team in the future? A good way to begin would be to show it in the Asia Cup, after all, it’s not being held in India for starters. This will avoid the spectacle that was India in England in 2018. 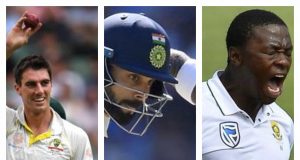 Sameer Allana - December 30, 2018
0
With hardly any big ICC event, 2018 can easily be described as the year that belonged to Test cricket. Throughout the year whether it...