That’s not my keyboard screaming for a change; it’s Pakistan’s ODI cricket. It is their worst losing streak in 46 years. If you equate Pakistan’s first hit in this World Cup to the Hollywood scorcher ‘Titanic’ then it was just about a ship hitting the iceberg, repeatedly and sinking.

No diamond. No painting. Just a shipwreck.

Let us assume this was their customary ‘we didn’t turn up today’ game. Even then, Pakistan’s flawed domestic structure and an overall ignorance about the needs of modern-day cricket has made them hit the rock-bottom in ODI cricket.

In his post-match analysis, Wasim Akram said that the delivery that hit Fakhar Zaman on his grill must have got other Pakistani batsmen ‘out’ while sitting in the dressing room. He was pointing towards their negative mindset.

It is opposite to what David Warner has going for himself, right now.

When Warner walked out in the middle to bat against Afghanistan his calling was loud as Katy Perry in the number ‘Roar’. “Louder, louder than a lion.”

You get the lyrics. Positivity makes you do wonders.

It was this positivity that had lifted Pakistan after they were thrashed by India in their Champions Trophy opener. The men in green met India again in the finals.

After winning the silverware, Sarfaraz Ahmed had made a statement that echoes the importance of positivity for a side like Pakistan. “Our entire squad knew that we were going to beat India. We just knew.” Having said that, if you are wondering what the rest of this read is going to help you ponder over Pakistan’s chances of making a roaring comeback in this tournament then you are absolutely wrong. Because Pakistan is Pakistan. Predictability died in their cricket several years ago.

What is still alive and will always be, is the junoon of their fast bowlers. And therefore, Pakistan fast bowling in the 2019 World Cup will have to be the top bet for the team if it is to climb all the way up.

The ongoing mother of all cricketing battles has suddenly started going where no one had thought it will.

Cloudy skies, greenish tracks, cold cross breeze, spongy bounce and suddenly the bowling Gods are smiling. And if it is going to be this way then surely Pakistan fast bowling in 2019 World Cup won’t be left out far behind.

If you’re Amir, you probably want to play all your cricket in England. Not just because every ball he bowls in England now is a pilgrimage of sorts but more because of the conditions. For most of part of June, pitches are likely to be juicy in that part of the world and Amir’s ability to contain the batsmen holds the key.

Since his return to international cricket, he has been criticized for not picking up wickets. It is because of his length. He has been bowling back of length that has limited any chances of lateral movement. But if it is tricky, if it is doing just enough, Amir can keep the batsmen on a tight leash. Control is a luxury for Sarfaraz as a captain if Amir continues to provide that then wickets are likely to follow.

After Pakistan conceded 350 runs at will throughout the bilateral series against England, chief selector, Inzamam-ul-Haq, first appeared in Wahab’s dreams and then picked him in the World Cup squad. Wahab adds experience, more pace and the art of reverse swing. To start with, Wahab will extract the extra bounce on these tracks and in the later stages when the pitches get dried up, his late dipping reverse swing will come in handy.

Initially, South Africa was invited to play the 5-match series in England before the World Cup. Cricket South Africa declined the offer. The Pakistan Cricket Board jumped on the opportunity and played close to 10 matches inside three weeks leading up to the mega event. Which is great for acclimatization but worse in terms of workload management.

Hasan Ali looks tired. While his pace hasn’t dropped significantly, his intent has. A fatigued body and a tired mind was reflective of the mad hoick he played against the Windies when his team was in desperate trouble.

Hasan’s problem has only one solution – Pizza. That and rest which is not the worst thing that can happen to Pakistan at this point of time.

If Hasan gets a break, Pakistan might think twice before playing all three left-arm pacers and then play them all because they have done that in the recent past. Shaheen is slightly different than Amir and Wahab.

He is not very smart. But he is fast constantly touching late 80’s.

His skill lies in taking the ball across the right-hander and he seems to have developed a good slower one too.

But Shaheen is a nightmare on the field. If Pakistan went in with 10 fielders and a piece of wood, then all of them will probably do a better job than the gentle giant himself. His nervousness while fielding is very similar to mine before every maths exam back in grade school. But that said, his pace and natural bite make him a weapon of choice for Pakistan fast bowling in 2019 world cup.

Standing 6 feet 1-inch tall, Hasnain bowls express pace and will be key to the Pakistan fast bowling in 2019 world cup.

The kind of pace that makes you switch off everything else and just watch cricket. That kind of pace makes him a rare commodity. In a practice match, before the England ODI series, Hasnain had hit two batsmen right on their badge. Bowling 90 plus mile per hour, he troubles the batsman whenever he gets his bouncer right. That is just physics.

He likes the hard length, the 6-8 m length that generates that awkward bounce. And like most express Pakistani bowlers even Hasnain gets a slight tailback with the old ball.

A big part of Pakistan’s fate in this tournament relies on these five men. And if they decide to bring their A game then irrespective of the result it will be great fun to watch. 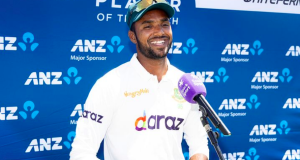 Debashis Sarangi - February 15, 2022
0
It was day four of the first test and the game was underway in its third session. The...