The pivotal knock of unbeaten 133 from Meg Lanning in the First T20I in the Ashes series was a mix of classic batting display as well as an exhibition of pure talent.

By far, it was her best knock. She single-handedly piled up Australia’s highest ever score in the T20I by stitching three vital partnerships with Mooney, Gardner and Perry respectively.

The injury scare in 2017 that resulted to miss out the Ashes, proved a turning point to Lanning’s career, as she emerged even stronger and fluent in her batting skills that she ever was.
The superlative knock of 133* came up just in 63 balls with her strike rate staggering at 211.11. It is also by far the fifth-fastest 100 hit by a batter in the T20I format.

Meg Lanning overcame her previous best score of 126 to post the highest ever score in the T20I. She went to notch up her second century of just 52 balls.

This is the 17th Hundred hit in the T20I cricket and Lanning is the third batter to strike two centuries in the shortest format of the game after Windies all-rounder Deandra Dottin and England’s opening batter Danielle Wyatt. She also surpassed the earlier high score of 126 held by Kalis of Netherland in June 2019.

Isn’t it a great achievement?

Yes, it is, undoubtedly.

This was an inning that converted her good shots into a long-lasting knock. After arriving in the very 1st over, she played the entire quota of 20-overs and remained unbeaten. She struck beautifully all over the field which was fast and pacy. Her innings started looking promising and confident right from the first ball.

Lanning kept punishing all the bowlers with her all-round ability to strike across all the areas in the field. Be it a widish delivery or a full-toss, the ball was bound to find its way to the boundary or across the rope in which she struck 17 boundaries and Seven sixes.

It was ruthless knock from Australia captain, while the England bowlers were left in despair. It was a well-crafted and planned to knock in such a way that it had to reach the ultimatum, i.e. to score the landmark 100 and finish the innings by posting a match-winning total. Both the targets were rightly hit and paved the way for Australia’s complete domination in the English soil.

The captain led from the front.

A thrilling, unbeaten 133 by Meg had contributed to 58.8 percent of the total posted. If anyone wanted to know what was the definition of daunting, then this was it. Earlier in the innings, she posted a partnership of 134 along with Mooney paved a platform to take her innings to the next level.

When she was dropped by Beaumont in the 14th over, she utilized her second chance to perfection to post this brilliant score. She hit 22 runs in the 17th over, which was brutal hitting all over the park when she reached her 100 with a Six over the mid-wicket region.

England after having a mammoth total to defend were bundled out for just 133 to hand over them their heaviest defeat in T20I’s by 93 runs.

Sad it is, for England as they have never lost to at Chelmsford before.

Lanning’s ability to take the game away from the opponents makes her the foremost batter ever to have played the game, she is the ‘Meg’astar for this Australian team for a reason and she rightly deserves it.

The Ashes already retained; she will eye on a complete whitewash barring the One-off test match. As other stars like Perry, Healy, Haynes, Shutt continue to be its heart while Lanning will continue to be the backbone of this champion team. 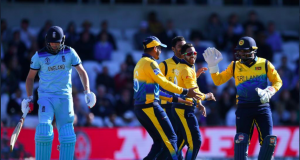 Prashanth Satish - June 21, 2020
1
England have been a terrific ODI side in the last few years especially in the phase post the debacle of 2015. At home conditions,...