Kristen Beams, the Australian legspinner, recently announced her retirement from all forms of the game. She represented Australia in 1 Test, 30 ODIs and 18 T20Is. Having made her debut in August 2014 in an ODI against Pakistan as one of the leading spin bowlers, Beams made her T20I debut after a few days while her Test debut occurred during Australia’s successful Ashes series against England in August 2015.

Kristen Beams, who was born and brought up in Launceston came a bit late in the international cricket. With no Tasmanian team in the WNCL earlier throughout her early days of career, she moved to Victoria in search of a playing opportunity and made her debut for the state during the 2007-08 summer. While Tasmania entered the WNCL in 2009, she chose to continue with Victoria, repaying the opportunities given to her.

However, her international debut came just months before her 30th birthday, when she was named in Australia’s XI to play Pakistan in Brisbane. Of the 49 matches she had played for Australia, her standout performance was in the tour of Sri Lanka in 2016 where she picked up 16 wickets at an average of 5.50 across four ODIs and one T20I, including her career-best figures in both the limited-overs formats.

In March 2018, after the conclusion of the 2017–18 Women’s National Cricket League season, Cricket Victoria had named her the player of the season where she won the Sharon Tredrea Award.

She has played for Victoria for the 14-long years. She even led the Melbourne Stars in the Women’s Big Bash League. With this decision, it became clear that she wouldn’t play in the remaining rounds of the 50-over Women’s National Cricket League season, which will resume in January.

“I’ve loved the last five years with the Melbourne Stars and being part of the Stars family,” Beams said. “To see the WBBL grow from the first year of competition to what it is now has been a fantastic journey. I’d like to thank the Melbourne Stars for their support. I’m really proud of the club and what it represents, and I wish them well for the future.”

“It’s been such a great journey, but you’ve got to know as a player when it’s your time,” Beams told cricket.com.au. “My life’s changed a lot in the last six months, moving back to Tasmania, and knowing the transition was coming, you don’t want to hang on. For me it’s always been about contributing and I probably haven’t been able to contribute in the way I would want.”

Let’s have a look at her best performances across formats:

Having won the toss, Australia elected to bat first. Their top three made a solid platform, courtesy the scores of 64, 45 and 29 from Nicole Bolton, Elyse Villani and Meg Lanning respectively. However, it was Alex Blackwell whose unbeaten 56 off 64 helped them to post 254.

Sri Lanka’s chase of 255 got off to a poor start as they were reduced to 35 for 5 in the 18th over, with Beams picking up three of the first five wickets. Along with Beams, Holly Ferling too did well. They wreaked havoc on Sri Lanka’s top order, leaving them struggling in the middle where Australia registered a comfortable 78-run victory with Beams awarded the ‘Player of the Match’. She, however, was the top wicket-taker in the ODI series with 13 dismissals.

Australia won the toss and chose to field first. Put in to bat, Sri Lanka struggled from the beginning, continuing their poor form from the ODIs. They lost five wickets for eight runs between the 11th and 14th overs, before posting 59 for 8 in 20 overs.

Beams, who had finished with the figures of 3 for 11, took all her wickets during that period, including the dismissals of Eshani Lokusuriyage and Ama Kanchana off successive deliveries in the 13th over. Australia registered an easy win with 71 balls remaining.

3-11 against Sydney Sixers in WBBL

Having played 45 matches in Women’s Big Bash League for Melbourne Stars, she has scalped 36 wickets which came at an economy rate of 5.92. However, her best bowling figure was 3 for 11 which came against Sydney Sixers in WBBL 04.

Having won the toss, Sydney Sixers opted to bat first. An unusual batting performance was shown by the Sixers as apart from Alyssa Healy, no other batter could reach the double-figure. Courtesy to the economical spell by Kristen Beams and Alana King who shared 6 wickets between them. Sixers bundled out within 92 while Stars won the game with ease.

However, this is not the end of cricket for her as she has taken the consultant role with Cricket Tasmania in June this year and will help to nurture the next generation of young Tasmanians.

“I’m working with Sara McGlashan who has been a wonderful international cricketer for New Zealand as well so it’s nice to have a chance to be able to give back a little bit,” Beams said. “I’m not sure I’ll ever be able to give back as much as I got from Cricket Tasmania but I’m certainly going to try the next few years.” 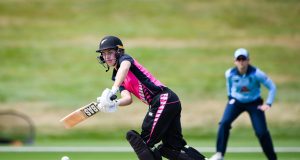 Shruti Banerjee - February 22, 2021
0
Sporting events have been taking place all over the world in the post-COVID-19 era. While men’s cricket has been going on in full swing,...