Is Test Cricket in the ‘Pink’ of health? The aesthetic and sensual visualization of colour has long enchanted both men of literature and the commoner in the sun-burnt street. If grey symbolizes melancholy and red vivacity of passion, then what does pink symbolizes?

Free spirit and wings of change?

The microcosms of such digressions are deeply embodied in the changing fundamentals of Test Cricket in the current scenario. We are but in an era that warrants a lot of change, especially with the coming of T20s.

Test cricket needs to be saved, they said for the longest time. There was a hushed voice of concern, slightly veiled in an array of discomfort. So what did Cricket’s organizers, managers come out with?

Test Cricket played under floodlight and with a Pink Ball suddenly surfaced as a much-needed panacea to rekindle life into the five-day contest, the rigours of which measure the true mark of athletes. All nations seem to be walking toward it, but India.

How would you react to the developing scenes?

Are Day-Night Tests the only way to revitalize the flagging condition of Test Cricket in the contemporary aspect?

You might ask, what good is being served by producing flat tracks? Doesn’t that reduce the bowlers to being this abject state of paupers? No good at all, isn’t it?

Thereby a well-rounded comprehensive blueprint has to be rolled out in order to make Test Cricket popular once again.

And, definitely, Day-Night Tests are going to take centre stage at least for the moment. Had it been a rubbish idea contrived of reality, two sides- West Indies and Pakistan- wouldn’t have played it.

Even Women’s cricket seems to have embraced the concept. The first and only Ashes Test was an enormous success, even though Ellyse Perry owned it like nobody’s business.

Yet, there’s this worry that continues to confound the purest form of competition.

It begins with the common 6-word sentence. Test Cricket has lost its popularity.

There are no two ways about it. Notwithstanding the widening web of T20 glitz, Test Cricket has to survive for Cricket to survive.

The sights of empty stands whilst Test Cricket is played present a painful spectacle to the real Cricket lovers. When not even 10,000 people turned up to watch Rahul Dravid-Virender Sehwag- Sachin Tendulkar- VVS Laxman- and that too in India (v West Indies, 2012) you knew something was amiss.

If ICC is looking to market Test Cricket and trying to make Pink ball Cricket acceptable, it needs the support of India.

But is the team ready for it?

In the wake of the razzmatazz of the IPL, many international Cricketers are choosing to give up on Test Cricket thereby focusing only on League Cricket. It’s a nefarious practice that’s slowly gathering popularity. Are, the detractors correct in questioning the BCCI’S policy of placing financial impetus above the efforts to uphold the sanctity of Test Cricket?

India refused to play Tests in New Zealand next year, as it won’t be economically viable considering the abysmal time difference between India and New Zealand. So, the hushed allegations against the richest Cricketing Board are not that inconclusive after all.

Bangladesh as a Test playing nation has toured all major Test-playing countries since their induction into Test Cricket. But, they have played a solitary Test match in India. India’s recently concluded tour to South Africa originally had four test matches, which got reduced to three subsequently increasing the number of ODIs.

The said Test Series dished out a mouthwatering contest and a fourth Test match would have been an ideal orgasmic end to a fantastic duel. So, BCCI better doesn’t allow T20’s to become a self-destructing Frankenstein lest it should have catastrophic outcomes. India has not participated in a Day-Night Test fixture yet. India’s animosity to play a Pink-ball Test in upcoming India’s tour to Australia has invited scoffing reactions from Australia.

Mark Waugh also termed the move as ‘selfish’. Waugh’s claims can be refuted by harping on the fact that there are certain glitches to the idea of playing with the Pink ball as it’s difficult to sight during twilight and also negates the role of a spinner to a great extent.

So, would India have liked to risk the predilection of facing Starc and Hazlewood with a notoriously unpredictable Pink Ball?

It’s anybody’s call. India’s tryst with innovations has never born fruitful results (Remember DRS? Remember Ajanta Mendis?). But, that shouldn’t actually signal a siege mentality against Pink Ball cricket from India. So, let the ICC iron out the flaws from Day-Night Tests and let India embrace the concept to the fullest.

The sight of Bhuvneshwar Kumar running in with a Pink Cherry may be a little distant yet but the wait may well be justified. The real fans are willing to wait! 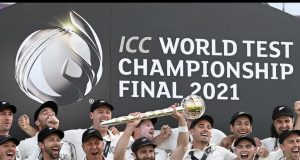 Charudatt Prabhu - June 24, 2021
0
The Moeraki Boulders are always there, just like the support staff; Purakanui Falls' three-tiered relentless flow is quite like the bowling of Tim Southee,...