You are in midst of a rock fest. It’s not your favourite idea of enjoying an evening.

But you were forced by a collection of friends for whom rhythm and music mean to be amidst ear-blasting, earth-shaking, grinding sound.

Their view, they’re entitled to it.

As you take a track after another, realising at least a couple of hours still remain, you are suddenly transported to a world where there’s cool breeze and softer, beautifully-bearable tunes. You seem serenaded by an easy-going vibe where there’s an icy-cool drink in your hand and right next to you- a bucket of ice. A party atmosphere beckons your attention in the background.

Everyone seems content in harmless self-absorption; time still passes by at ease but it captivates you.

Did you have Jazz in your mind?

Transport the scene into a cricketing turf and it could mean a “Mark Waugh-mode” was on.

On the cricket field, regardless of the situation being an alarming crisis or a day marked by slow progress, Mark Waugh induced a peppy groove.

He was a sedately inspiring musician who played music with the bat in hand.

He was soft. He was supple.

Picture the nippy breeze in an Eden Park evening as an Auckland crowd enjoys a Test. Picturise a refreshing gathering of clouds over the Sydney Cricket Ground when the sun is burning everyone down.

Mark Waugh was cricket’s cool weather. Hardly stressed, unmoved by what was happening. Still focused. Still very much interested in being part of the proceedings.

He presided over tense situations coolly and went about collecting runs easily. Because constructing those would’ve implied inducing sound and noise, tilling, drilling and the paraphernalia.

Mark Waugh was rhythm. He wasn’t the beats.

A noise wasn’t him. Loud celebrations didn’t define him. He tended to pressure with an almost therapeutic touch.

Whether it was his early striking of runs courtesy 1992’s 64-in a raw-affected draw in Lara’s Trinidad or that 1998’s 153 against India in Sachin Tendulkar-land, Mark Waugh preferred keeping shut and instead desired to get on with the act.

Loud grunts were often around him; fielders smashing hands, clenching fists, captains having a few words with their fielders and umpires. The stares from a Curtly, the deliberate touching of shoulders by Donald came every now and again.

Soon, they’d remember they were engaged needlessly with an Australian pop monk; good-looking, charming with the bat and focused purely on batting.

At all these times, Mark Waugh seemed lost in an invisible trance, lost to the music playing in his mind.

Could there have been a walkman attached to his ears we never saw?

Since what we saw was that familiar Slazenger blade that came gracefully down from the second slip before it nudged the ball around for a regal collection of runs.

His brand of mayhem lacked bloodshed or hostility.

On most occasions, whether Waugh played on the front foot or the back foot, it seemed he had enough time to change the context of the match.

That was Mark Waugh. Whether it was dancing down to Venkatpathy Raju or Anil Kumble or taking sheer blinders in the slips, defying gravity and laws of physics.

Batsmen got mauled first at slips, then cleaned up by the bowler to make the end equation read: Caught Mark Waugh, bowled Warne.

How often has cricket exulted in the wake of a slip-fielders’ heroics?

Yet, despite striking 16000 international runs, nearly the same as AB De Villiers, so little do we celebrate Mark Waugh

And perhaps, philosophically, it only makes sense.

For there are some for whom less is more.

For what is vintage will seldom carry boisterousness.

In a way, it’s fitting that Waugh wasn’t born in an era where purple shoes, blue streaks or ostentatious display of bling around necks defined the game.

It was naturally befitting then that he lent to cricket’s simple sub-text some stylish narratives. To the broader cricket world they might have been glamorous snapshots but for Waugh- the silken square drives, gentle nudges down the leg side and, feathery flicks toward deep square leg- signalled customary mode of operation.

If you were a witness to numerous stitchings of runs from the top order with Gilchrist or in the middle order with brother  Steve, Bevan or Martyn, Mark Waugh was cricket well-timed.

He was like a healing balm to a maddening headache.

Despite striking 38 hundreds and 97 fifties- no lame achievements in an era where bowlers often punched above their weight and where batting hadn’t yet become the name-plate of cricket, Waugh wielded less of arrogance, even less of brooding indifference and emerged unscathed despite a needless involvement in a bookie-saga.

We must deride Waugh for making inroads toward a stratum that only malign the sport and in turn, brings taint to the great bastion that is Australian cricket.

But we must credit Mark Waugh for lending his touch of grace, an element of the sublime that prodded shoulders with the panache of Lara and the titanic presence of Tendulkar.

Mark Waugh lent a masseur-like feathery touch to the senses that provoked sheer love for cricket.

And despite being in a set-up of greats who became standard bearers of world-beating heroes, Mark Waugh taught how much could be achieved by being so deft, so beautifully understated. 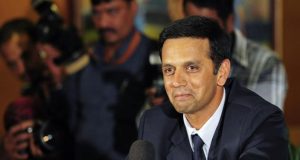 The Man Behind The Wall