The Fifth Test of the Ashes series in 2001 was played at the Oval. An English batsman, no longer young, no longer in the prime of cricketing youth, was up against a crooked albeit challenging coterie of Australian bowlers.

McGrath was feisty as usual; he didn’t refrain from offering some lip service to the batters throughout. Warne was, at his best, a prince possessing guile.

On a pitch assisting bowlers with a great carry, the number five English batsman, after toiling hard for nearly five and half hours, finally got a gift wrapped in the form of an over-pitched delivery.

He would do the needful expected of him.

The ball would be guided to the cover boundary. Soon after, he’d reach what had then been his second Test hundred. He would compile a 133.

This was a knock that augured the usage of sobriquets.

Perhaps even today, 17 years hence, as Mark Ramprakash smiles explaining that effort at one of the cricket’s grandiose venues, there’s a sense in calling it dogged.

Its doggedness had more to do with the time period it took Mark to compile it and less to do with the opposition it came against. Everyone loves an Ashes hundred. Mark’s bigger win was that it had taken him a decade of a wait to strike his first ton at home.

There was hardly a doubt about his temperament and technique.

For, in his very-first Test outcome, circa 1991, against the West Indies, he’d hung around for 143 minutes, compiling 27 up against Patterson, Harper and, Ambrose.

But, the Oval ton would the last in his career, a saga that spanned 11 years.

Mark Ramprakash was part of an English team where no individual batsman enjoyed a singularly starry status, given how thick they played as a unit. He formed part of an English side defined by less overly-dependence on star players and one where strength emanated from a majesty of joint efforts.

It was a team where Graeme Hick was about being the backbone of the 90s batting, where Graham Thorpe combined grace and class giving the middle-order the ability to express. It was a side where Gough often saved the day, Cork intimidated and Caddick often restricted the flow of runs.

Atherton and Hussein compiled runs from the top order.

In a team where Alec Stewart often stitched partnerships with the likes of Caddick and Gough, Ramprakash often struggled to maintain his place in the side.

To that end, he’s never quite discussed with the same intensity one would apply himself to discuss a Mark Butcher, regardless of the batsman’s truncated run.

Yet, a statistical breakdown of his Test career, the only format that helped him elongate his stay, reveals he’d managed nearly 1100 runs batting at number 5.

5 of his 12 fifties and 1 of his 2 hundreds came from a position where he batted at an average, that, in cricket’s halcyon days- the ball had an equal say with the bat- was considered worthy of praise if not an ovation for being 35.

While there were serious individual talents, they weren’t worshipped in a clannish structure as evidenced today in a social media-obsessing world, where players are anointed great first, before becoming legends for spending time at the crease, later.

Mark Ramprakash, who failed to impress selectors then and probably would compel fans to wonder even about his presence, two Test hundreds in eleven years, didn’t have the luxury of forging a comeback in other formats.

Of course, there were no T20s then. A failure in Tests would be tantamount to showing you the door.

How did the contemporary sport become a parable of change, where ODIs and T20s exploits earn talents a place in the five-day game is about every bit mysterious as is Ramprakash’s phenomenal comeback into the reckoning, an effort that’d compel you to accept him with glee once you visit his first-class records.

But what he did do, however, was redecorate the withering walls of his batting (records) with an emulsion of rich paint, giving his room for existence in the game not only a facet of respect but some grandeur, a term that shrinks others in comparison to Mark Ramprakash’s phenomenal first-class feats.

Mark’s first-class runs go on to expand a 6-figure mark, reading 35,659 runs. But it’s his 114 hundreds that have paved way for a new generation of followers and even existing fraternity, be it Mark Nicholas, who was on the mic during that 154 or Harsha, to lead the way to recognising one of English cricket’s colossal figures that attract more questions than it clears doubts.

If Mark really was that good a batsman, how did he not sustain himself in Tests? Further queries warrant a clinical investigation, just how did the Surrey-batsman refurbish and revitalise himself in what had hitherto been an ordinary cricket run in Tests?

Surely, it cannot be that a batsman who battled the Aussies, held on to his own and fired 800 of his 2350 Test runs batting a position below his usual five, found the dullest of first-class bowlers?

One doesn’t need to visit the annals of English cricket, to discover that it’s first-class cricket where the Anderson’s and Broad’s, Tremletts’ and Woakes’ are forged first.

But we can’t answer on Mark’s behalf. We can just direct attention to something that can no longer be ignored by our cricket-embedded conscience.

Aren’t youngsters having forged careers as a result of foraying well in an IPL or a CPL season better off today?

Mark Ramprakash, quite like VVS Laxman, belonged to an age where you had to prove your mettle first in Test cricket, unlike the other way around, as witnessed today.

But one wonders, just what might have happened, had his technique and the natural game suited the shorter versions or if he was born in an era where individual scores and strikes rates justify selection and the categorisation of batsmen called greats? 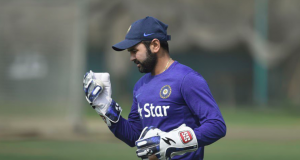 Abhinav Bose - December 11, 2020
0
Steve Waugh was one of those cricketers who revelled in playing under tough circumstances. He would often fail to deliver when the scorecard read...