The first T20 between Ireland and West Indies was underway. The weather was pleasant and easy. In fact, it was breezy. Grenada wasn’t wrong in anticipating another instance of domination by the home team after a splendid ODI outing.

But inside the opening over itself, it became clear this wasn’t going to be a one-way street.

Ireland were firing and the hosts were facing the heat.

When West Indies found a way to keep Ireland’s second-most experienced batsman in the current line-up after Kevin O’Brien, (debuting back in 2006 to Stirling’s 2008 debut) quiet in the ODIs, it may have seemed to Pollard’s team that one crucial box was ticked rightly.

After all, to keep Stirling quiet signals an early advantage.

But that’s the thing with accomplished batsmen isn’t it: you can keep them quiet in a game or two but cannot silence them repeatedly.

In bowling wide and short and often, without a real plan, the West Indies awoke a sleeping giant in Paul Stirling; bowler destructor, accelerator, big run-maker, confidence killer, and above anything, a toast of Irish cricket.

Unfortunately, the Windies found this the hard way as they were knocked over in the first T20 at their own backyard.

To beat a T20 side is a normal occurrence. But to stun World T20 champions is a feat in itself. One wondered whether Ireland have gone on to achieve this without their seasoned campaigner?

His first four might have come from an outside edge. But it didn’t take the audacious right-hander long to signal intent.

The first signs of Paul Stirling being in commanding form were through a big strike over long-on for six on Pierre.

It was just the beginning. Severity was to become the order of the day.

He then welcomed Bravo- who in his first over of the much-talked-about international return went for 18- through a powerful six.

Paul Stirling had read the slower one well, before sending Bravo packing.

Quite early into the innings did Stirling announce his intentions, on this occasion, telling the master of the disguised one that he had nothing to hide. That it was going to be an evening of smacking the ball big.

It wasn’t that he was in this see-nothing-hit-everything kind of beast mode.

He was watchful despite persisting with aggression.

Few balls later by the time the sixth over begun Sterling had already reached fifty, clearing his back leg to send a flighted one by Pierre over long-off for another maximum.

Over after over, ball after ball, second after second Ireland’s hold over their opponents tightened. From a Windies perspective, the powerplay meant being played into the hands of the Irish; their bowlers changed but the intent of Stirling didn’t.

But the shot of the day, however, came off the second ball of the 11th over, another hapless one from Windies’ perspective.

Tossed a flighted one albeit, in the batsman’s zone around the middle, Stirling dislodged one from Walsh with absolute disdain, sending this one well over ten rows back over mid-wicket. With that, he brought up the team’s 150. There were 9 more overs to come.

Soon, he’d be on his way back only 5 runs adrift of what would’ve been a precious and deserving landmark; a maiden T20 hundred, a feat that would’ve made him just the second batsman in the current Irish playing eleven with a three-figure mark in the game’s shortest form.

Earlier toward the start, Sterling’s compatriot (and good friend) sitting in the commentary booth- Niall O’Brien- had indicated how the two, including his brother, Kevin should make hay while the sun was shining. Even though the conditions were rather breezy, Stirling in sterling good form ensured it was burning bright for Ireland in the middle.

Windies tried everything in their might but nothing worked. We saw Pollard bringing Bravo early into the attack after Cottrell proved expensive. Later, the captain would attempt to test the batsmen attacking with pace and spin in tandem as Pierre and Cottrell would bowl from different ends but it all proved banal.

Pollard brought himself into the attack and found the blunt blade of a batsman who was on song. Perhaps one who makes cricket all the more worth your while when he gets going, minus any drama, batting with clear intent minus any fuss.

It took Paul Stirling only 47 balls to send the Windies out of the park in his characteristically fiery 95.

And that’s exactly how he’d want to approach the remainder of the two T20s; not holding himself back but backing himself to go the long distance.

At a time Ireland- composed of many relatively young but promising, exciting but not entirely experienced names- are finding its feet through the promise of a Little, Delany, Adair, what could be more inspiring than finding a senior figurehead to lead by example?

Not someone who’d let a recent slack performance with the bat to weigh in ok the mind, Paul Stirling’s cricket is hardwired in the ‘moment’.

It’s embedded in the understanding that one’s got to get a move on.

Stirling’s game is about tempo.

It’s about seizing the early initiative; basics that even attacking batsmen count heavy.

This is why there’s little surprise that coming at the back of an insipid turn-out in the ODIs- 83 runs from 3 games- Stirling has immediately pulled the Windies under the pump as he fired his highest T20 score.

It’s not only a sign of progress but a sign of maturity that the 29-year-old believes in taking a game at a time.

Now that he’s back to scoring with another 2 games to go, one can’t wait to see what the St. Kitts brings.

Another fiery knock of the likes of Grenada can spray early dust to Windies’ hopes of drawing level with their aggressors.

But while we can’t dictate outcomes and can only predict, what’s certain is that there could be very ominous signs for West Indies with the Belfast-blaster being back among runs.

In familiar partner in destruction – Kevin O’Brien- seeming in fine touch- the Stirling show might last longer than Windies would want. 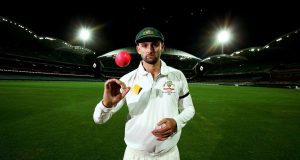 Abhinav Bose - January 10, 2018
1
Australia - a land laden with glorious sporting history, rugged terrain, and fierce weather. The coarseness of the landscape has invariably seeped into the...