The global pandemic COVID-19 outbreak has caused disruption to sports across the world including Cricket Scotland and brought the world into a standstill. While the International Cricket Council (ICC) announced that the 2020 T20 World Cup has each been postponed, the 13th edition of the Indian Premier League (IPL) is going to run.

While this might lighten up many eyes – be it players, broadcasters, fans, freelancers, etc, and help the BCCI to recover from the crunch situation a bit, the situation is not similar for many other countries.

But 2020 impacted by COVID-19 affected has been a “huge blow” for Cricket Scotland, as shared by chief executive Gus Mackay. As the T20 World Cup and home matches with Australia and New Zealand have been postponed, it costs around £500,000 in revenue.

Think of any amount, a loss is a loss at the end of the day- isn’t it? And this is a matter of hundreds of thousands of pounds.

But if you think that this is all there’s to the monetary loss, then you are wrong.

Things became worse for Cricket Scotland as Mackay said that there are no matches before 2021 despite the men’s team have resumed training in Edinburgh.

“To be honest the whole year has been a big blow for us,” he said. “We have had to look at a reset plan for the business to make sure we can reset and go again.”

Although Scotland are currently Associate Members of the International Cricket Council, they are eyeing to achieve the full-member status and the less opportunity to play against top teams makes things tough for them.

“It has to a certain extent,” he said to BBC Scotland. “Part of the criteria was continuing to perform well and beat full member nations. We have done that in the past couple of years and we were hoping that we could probably pull off a couple of wins this summer leading into the World Cup.”

“So it has set us back a little bit but I am confident that we can get back on that pathway and continue to push forwards to become a full member of the ICC,” he again added.

This is not the end of trouble for Cricket Scotland though.

The launch of the European T20 Slam tournament has been delayed to 2021 amid the COVID-19 pandemic outbreak which was scheduled to launch in 2019. Two teams each from Scotland, Ireland, and the Netherlands will compete against each other in the league.

However, the situation is slowly getting better in some places and England have hosted their first series in the country against the West Indies after the COVID-19 lockdown.

Later they will host Pakistan who’ve already reached England for the upcoming series. For Australia, a limited-overs series against England in September could be their return to action as the discussions are ongoing.

While the other teams are slowing hitting the ground, only time can tell when the Cricket Scotland will return to action. Truth certainly is, the cricket-fanatic might not even remember the last bi-lateral series Scotland featured in. And that’s just as disappointing as not knowing when Cricket will return to the Sean Connery-land. 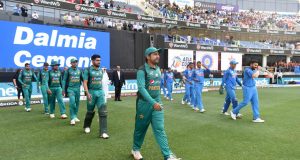 Can India and Pakistan Both Grow Up To Resume Normal Cricket?