Reeling with tears of torment, cries of anguish and the word which keeps life moving called future under heaps of uncertainty.

How some intellectually bankrupt goons, yes, they are not worthy of being called citizens have destroyed the livelihoods of their fellow countrymen in the name of a reset or a revolution is beyond me.

Well, this is exactly the occurrence two provinces of South Africa in KwaZulu-Natal and Gauteng have witnessed in the last one week since the arrest of the ex-president of South Africa under the pretext of a protest.

Truth be told, the situation one has seen is anything but a protest. Cities have been destroyed, malls have been looted, shops have been burnt, businesses have been invaded, food and essential supplies have been cut and what’s left for the normal South African is to live in the realm of a four-letter word called fear.

The South African Economy has been sabotaged thanks to one simple instrument of destruction called chaos leading to a state of anarchy. Yes, complete anarchy!

One may even call it a civil war as the very life of a South African citizen is now under threat.

Having said this, when one’s country is in a state of disaster, can they really focus on the task at hand which is to play a game of cricket?

This, thousands of miles away in the beautiful setting of Malahide against an Irish team that convincingly got the better of the Proteas in the second ODI courtesy a heroic ton from skipper, Andy Balbirnie giving them their first win over South Africa after the first ODI was washed out.

Talk about adversity and that is exactly what each member of the Proteas outfit faced heading into the third ODI, the decider to prevent a series loss to the Irish with the ills of anarchy back home already plaguing their minds.

Well, as they say in the face of adversity comes opportunity and that’s exactly what a young Protea star created to see his team level the series at one apiece and truly save his already deflated nation from the embarrassment of the Irish curse.

The young man in question was none other than the 25-year-old, Janneman Malan who hammered 177 of just 169 balls enroute to mounting a daunting 346 for 4 for the Irish to chase.

His innings had every shot in the book right from the flamboyant cut over point, to the majestic drive through covers to the hoist over long on and my personal favourite the short arm jab making his average soar to a whopping 120.75 that would even make the great Don feel proud.

You read that right!

This after the Capetonian recorded the fifth highest opening stand of 225 for the Proteas in ODIs with his partner in crime, Quinton de Kock who himself scored a mouth-watering 120 of just 91 deliveries. What was even more refreshing was to see South Africa mount a 100-run opening partnership for the first time since the ill-fated 2019 World Cup.

The maturity and the will to excel for South Africa has been so ingrained in Malan with two tons and two half-a-tons that he has already accomplished in just six innings. An enviable feat that would make every Protea supporter jump with joy.

Even for a neutral with the way Janneman went about constructing his innings to be there till the end to give the Proteas the much-needed impetus to soar was a site to behold.

A certainty at the top of the order for the Proteas in the limited overs setup if you ask me.

The Irish in response bundled up early, losing six wickets for just 92 runs before a South African and an Indian resurrected their chase with a brilliant century stand.

Yes, the South African’ Curtis Campher joined hands with the Indian born Irish spinner Simi Singh to plunder the Protea bowling to all parts of the scenic ground at Malahide as Simi went on to score his maiden ton complementing the 50 from Campher to get Ireland just 70 runs shy of the South African target.

A performance worth every praise as Ireland in this series more than showed that they no longer are an associate nation in cricketing terms that the so-called major forces can take lightly.

In truth what was even more satisfying was how South Africa with this win, courtesy a remarkable effort by Janneman Malan would surely have brought a much-needed reprieve to millions back home who are under the calamitous cloud of misery that never ceases.

As I conclude this piece, I would urge you my Dear Proteas to prevail in the T20 contests that follow as you no longer are just ambassadors of the game but the catalysts to unite a country that is broken.

After all, as the great leader of South Africa, Nelson Mandela said ‘Sport has the power to unite people in a way that little else does’ and even the almighty would agree the once beautiful tip of Southern Africa needs unity now more than ever. 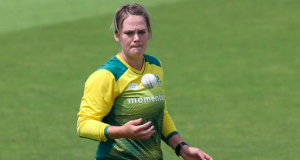 Shruti Banerjee - July 2, 2020
1
We fans have seen hat-tricks, four-wicket hauls. Surely, there've been fifers over the years. Stuff that's thrilling and even unexpected at times. However, some...