The West Indies, one reckons, have readied themselves already to face what may really be a very unexpected Dutch challenge. That it’s white-ball cricket where they again find themselves should give them some confidence at least for they’ve easily overcome minnows or as some considerate followers would call them, then up-and-coming sides.

A reference to context being their whitewashing of Ireland back in early 2020 by a 3-nil margin in the Caribbean, a year after which they’d dismantle the touring Lankans in the ODIs, also by 3-nil result.

But those were good days; for the grind in 2022 was real and so were the distasteful results where both India and even, Ireland, lest you forgot, hammered the Windies fair and square in ODIs.

But in some ways, you could say that before that tragedy struck the Caribbean side, August-September, 2021 wasn’t a bad time to be a West Indian supporter, at least in white-ball cricket.

They had just smashed Australia albeit a depleted outfit by 4-1 at home and were looking in shape to defend their T20 World Cup title.

The boys from the Caribbean had already lifted two T20 World Cup trophies in 2012 and 2016, and a hat-trick was looming large.

The Caribbean Premier League had thrown up some exciting and promising talent. Top order bats Lendl Simmons and Evin Lewis were scoring consistently while spinner Hayden Walsh Jr and pacer Obed McCoy were picking up wickets for fun.

And, even the most pessimistic of West Indian supporters were quietly hopeful of the team’s chances in the upcoming event.

It was a decision that captain Kieron Pollard and the West Indian management took consciously, to back the experienced players and they ended up paying the price for it.

The team had a disappointing showing in the World Cup, managing to win just one of their five group matches, that too against Bangladesh. They even lost their Super 12 fixture against the less-fancied Sri Lankans by a comprehensive margin of 20 runs.

While only Shimron Hetmyer was successful in making any sort of impact with the bat, none of their bowlers even came close to any decent showing.

West Indies’ ignominious exit from the T20 World Cup brought an end to the careers of Dwayne Bravo and (unofficially) Chris Gayle and perhaps to that of Lendl Simmons and Ravi Rampaul as well.

Now, with captain Kieron Pollard having announced his retirement from international cricket, West Indies are staring at another T20 World Cup in less than six months. And again, they are not looking anywhere close to being a well-oiled unit.

Although nothing has been made official yet, Nicholas Pooran who led the West Indies to the much-celebrated victory in his debut captaincy series over Australia recently is all set to take over, and the man from Trinidad has his task cut out.

It is beyond doubt that Pooran is one of the most talented cricketers of his generation. You don’t get bid for Rs 10.75 crore in the IPL auctions without having something about you. But, if there’s one thing that the wicketkeeper-batsman needs to work on, and he will himself know that, is his consistency.

Pooran, the leader, is a work in progress and has made a few tactical errors in his short international captaincy career but that is only natural and he will continue to grow and evolve as he gets accustomed to the rigours of leadership. However, Pooran, the batsman, is someone West Indies need now, more than ever.

Alongside Glen Maxwell, Nicholas Pooran is one of the few middle order batters in world cricket who can change the face of a T20 match within an over. But, it is this explosive style which also increases the risk factor with him, as it does the reward.

For a player of his pedigree to have scored just 1193 runs from 57 T20 Internationals at an average of 27.74 and a strike rate of 128.97 with only eight half-centuries is not something he will be proud of. Especially when he does have the potential to pull it off.

Cue the 2019 ODI World Cup clash between Sri Lanka and West Indies when he came out to bat at No 5 with West Indies in trouble and went on to play the best International knock of his career to date.

Pooran clubbed and caressed his way to 118 off 103 deliveries in a knock studded with 11 boundaries and 4 sixes and took West Indies to within touching distance of Sri Lanka’s target of 339, but could not take them over the line.

Similarly, his three consecutive half-centuries in the recent T20I Series between India and West Indies and the manner in which they were scored was remarkable. Just that he did not get enough support to convert those into match-winning knocks.

When Pooran ended up with 193 runs including two half-centuries in the three-match ODI series against India in 2019, he credited mentor Kieron Pollard for the returns.

“He’s been like a big brother to me, a father-figure. He’s been there since I returned to cricket. He gave me the opportunity. I’m thankful for that. Pollard and I know each other, and we are really good friends on and off the field. So we know how to complement each other,” Pooran said.

Although at different stages of their respective careers, the equation between Nicholas Pooran and Kieron Pollard is similar to that of Virat Kohli and MS Dhoni. Till the mentor or the father figure was around, the prodigy could afford an odd slip-up, knowing that someone had his back.

Now, with the old oak tree having fallen, Pooran not only has to garner enough shade for himself but for the entire team, with an eye on the upcoming T20 World Cup.

Pooran does have the players to create history. Who would not craze over a side in which Fabian Allen and Hayden Walsh Jr bat at No 9 and 10 and are still capable of taking even the best bowlers in the business to the cleaners.

The all-round ability and batting depth that Windies possess is second to none. With guys like Kyle Mayers, Rovman Powell, Romario Shepherd, Dominic Drakes and Odean Smith, the number of X-factor players the team can boast of is truly amazing.

All they need is some consistency and level-headed leadership from Nicholas Pooran, and mission 2022 won’t seem that unrealistic for the Men in Maroon. And, if Pooran comes anywhere close to achieving that, rest assured, the towering figure of Pollard will be cheering in the backdrop. 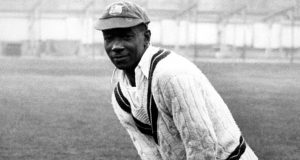 Fast-Forward To The Past: The India vs West Indies Series In...