New Zealand will lock horns with Pakistan in the first semi-final of the ICC Men’s T20 World Cup 2022 at the Sydney Cricket Ground (SCG) in Sydney on Wednesday, November 9.

Babar Azam-led Pakistan is in the semi-finals, thanks to Netherlands’ thumping win over South Africa. The Greens might have started their tournament campaign with two successive losses but they made an astounding comeback to register three consecutive victories against the likes of Netherlands, South Africa, and Bangladesh.

The only concern for the Men in Green will be the form of their openers Babar Azam and Mohammad Rizwan with the former of the two looking like a pale shadow of himself while opening the batting for Pakistan. Their bowling though remained their strong suit with the likes of Shaheen Shah Afridi, Naseem Shah, and Haris Rauf delivering their best in the matches they played so far in the tournament.

As for New Zealand, they will be riding high on confidence after the way they have performed in the league stage of the showpiece event. They began their tournament campaign with a dominant 89-run victory over hosts Australia and their only defeat in the competition came against England. However, they were quick to brush off that defeat, registering a 35-run victory over Ireland.

The only concern for the Blackcaps was the form of their skipper Kane Williamson. However, his late revival against Ireland must have provided the team with a huge sigh of relief ahead of the big battle. Their bowlers have done exceedingly well throughout the tournament and the team will expect them to produce the same sort of performance against the Green Shirts.

In perhaps the most underrated rivalry in the ICC knockouts, Pakistan seem to hold the upper hand with three wins in three semi-finals, one each in 1992 and 1999 World Cups. Though, the 2007 final signalling that moment of reckoning that even today seems like a classic case of being yet so close and yet, so far.

With a very well-balanced squad, the Kiwis, however, are slight favorites heading into this game- or do they?

All said, much like that unmistakable disclaimer on a box you don’t seem to read but are still wary of, the biggest headline, arguably speaking ahead of the big semi’s clash would be this:

Write off Pakistan at your own peril, especially after the way they have performed against South Africa and Bangladesh.

The pitch that will be used for this game will be the same one that hosted the Super 12s opening fixture between Australia and New Zealand, which will nullify the toss factor eventually.

Overall, the wicket at Sydney Cricket Ground has been a batting-friendly one so far in the tournament. Teams batting first have won five out of six games played at this venue so far.

Hence, whoever wins the toss might opt to bat first and put up a mammoth total on the board. As for the weather, there’s a chance of rain on Wednesday morning, however, it will get sunny by the time the much-anticipated T20 World Cup semi clash starts. 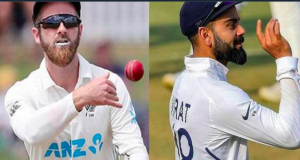 World Test Championship – A Tale Of Trial And Error?

Sameer Allana - June 5, 2021
0
When the ICC first came up with the concept of the first-ever World Test Championship, it sounded like a great step to promote Test...