It’s April 3, 2016. The West Indies have won something, that given their current waning fortunes, sounds like an urban legend. Nonetheless, it’s the toss. Putting England to bat, Bravo and Brathwaite, with 3 wickets apiece, are smiling at the end of the 20th over. The asking rate of 156 seems as gettable for a batting-heavy Windies as is the potential of waterlogging in Mumbai during torrential rains. Sporting the biggest smile, in the Windies camp is a familiar easy-going bloke: Christopher Henry Gayle.

Time to party, the fans think. Then, think again.

Nonetheless, by the time the final over of the inning turns up, the West Indies are staring at a mountain to climb. As fans, you are left scratching your head. What became of their big-hitters- Sammy, Russell, Bravo and Simmons? Worse still, what on earth happened to the ever-cheerful Gayle?

Jim Morrison, it must be said, might have hinted at Gayle’s personality, albeit several decades prior to the Jamaican’s birth when he said, “I’d prefer a feast of friends to a giant family”.

Funny, friendly, somewhat mad like a shooting star, Gayle’s usually a guy bowlers don’t take lightly. But, fortunately on April 3, as Gayle succumbed to 4 off 2, another in a familiar streak of upsettings the big guy’s been attracting, Ian Bishop’s enthusiasm found something a rescuer in Carlos Brathwaite.

The rest, we know is history. The 4 back-to-back sixes that dulled Stokes and thus, Her Majesty’s hopes meant that Eden Gardens had found a new hero that evening. Did it upset you that it wasn’t Gayle?

But these things happen. That’s Cricket’s way of telling us fans that the thrill ain’t dead yet.

In Gayle’s land, sorry, universe, however, the falling early in a big stage was familiar sight.

An year ago, before Eden’s triumph, a night that Windies owned as if it were there’s since the beginning, the Windies were at it again.

Leading his troops- rather T20 supremos in a 50-over contest- Sammy’s men scuttled without much fight. This was no bi-lateral series, but the ICC World Cup, 2015. In his side’s 182, a total India knocked down in under 40 overs, Gayle’s contribution was 21 off 27.

Was that really the Gayle we’d grown up admiring, the same bloke who belted Zimbabwe just days before?

That wasn’t what a constantly struggling Windies managed, rather Gayle’s individual score.

Cricket, it must be said is often about watching highlights, in case you miss a live game. We have the freedom to fast-forward to the bits where batsmen torment bowlers, sending them out of the park quite like Gayle does and has been since 1999.

This only strengthens Gayle’s landmark achievement of being the first to reach 10,000 T20 runs.

For a man who disdainfully reduced an Ntini, Pollock and, Kallis, to notch up World T20s first ever hundred; that unforgettable 117 off 57 in World T20, 2007- where have the barrage of big strokes disappeared?

It isn’t that Gayle’s forgotten what it means to club a few.

That can’t be the scenario for someone who bludgeoned IPL’s highest individual score of all time; 175 off 66 balls. While most batsmen wield their willows with undeniable authority, in clubbing the fastest to the meanest, whether you speak of Ajantha Mendis, Jadeja, Shami, Sharma, Johnson, Lee or, Steyn, Gayle’s been merely flexing those burly muscles.

So while the self-proclaimed Universe Boss has brightened his star-lit galaxy (read runs for stars) of T20 with records no batsman in the history of the game has come close to matching, there’s more than just the injuries, one wonders, in exacerbating his poor run.

As the ‘King’ of Kingston prepares to take the field, once again, (versus India) in a somewhat meaningless one-off T20 on July 6, there’s every bit of a possibility that Gayle might use that effortless twitch of his powerful arm to produce magic. Or, maybe not.

But he’d be wise to remember that while in doing so, he gives crowds as much entertainment as he bears the risk of losing his timber. Although, Sabina Park will warm up to welcome its famous son in the modern game, once again. Will you deliver Henry?

Christopher Henry Gayle, fans would note have compiled those 1519 T20 runs as rapidly as a cunning overtaking manoeuvre by a Ferrari driver on an F1 track. The point is, can the marauding six-machine make it count this time around? His fans, one’s sure, would be hoping for a thunderstorm from the left-hander’s willow come Thursday, July 6 in Jamaica. 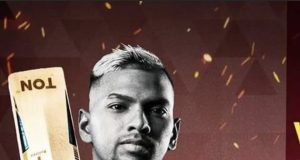 Dev Tyagi - October 17, 2022
0
Cricket, much like life, works on some principles. And winning, it ought to be said, is a habit most teams inculcate by...