We are at the Gabba.

The ball is swinging and the runs are coming by. Somehow.

Amidst loud cheer- customary to Australia as is beer during summer- there’s anticipation and thrill.

Ponting has just been dismissed.

He failed to trouble the scorers.

The hosts are already 5 down. They still trail Pakistan’s first inning ebullience.

Langer is gone. Even Steve Waugh’s been dismissed.

There is beer in the crowd and Akram and Shoaib in the ground. They are running in hard: attacking in tandem.

Life’s not going to get any easier.

There is no panic in that gait.

Soon a bludgeoning pull stroke fashions its way to the boundary.

What follows are strong cover drives and thuds square on the off.

Then suddenly, Shoaib manages to breach his defence.

The stumps are shattered but not Australia’s hopes of dominating Pakistan.

The score reads 7-485. 27-year-old Adam Gilchrist has contributed 81 breezy runs. One fails to find regret on the New South Wales bloke’s face. He missed a hundred after all.

Next up is Hobart. It’s that man in the middle. Again.

On a slow but turning track where Warne got all the assistance, Pakistan are bowled out for 392 in the third innings.

Gilchrist, however, stays on. He bats on.

The target, that looked imposing with 5-125 with Ponting gone looks gettable. It’s almost too sudden for fans’ comfort.

Gilchrist has decided that he’s going to walk out of the crease to Saqlain.

He will pull Shoaib come what may and will coax Akram, who goes for nearly 4-an over to bowl him wide outside off.

That line, before Dravid named it after the lordly elegance of Ganguly in cricketing folklore, is Adam Gilchrist’s dominion.

He has established some sort of sovereignty there.

Akram, Shoaib, even Azhar Mahmood fade away trying to catch Gilchrist off guard.

No regret again as he failed to reach 150.

In an age where Australia unfurled a bastion comprising of glamorous match winners- Ponting’s blade oozing awe, McGrath, Warne dominating world cricket like gangly bullies and Waugh leading with stoicism- Gilchrist made the task of battling Australia only several notches tougher with his grit and competence.

So utterly giving was Gilchrist to Australia that one often forgot his skill didn’t merely extend with the might and skirmishes of his bat.

That his heroism also lay behind the wicket. Remember 379 catches in Tests, 417 in ODIs? Not even Sangakkara or Dhoni have gone on to better that record.

One is compelled to ask whether fans have embraced any other Australian talent with such profound love as Gilchrist?

In an age, where cricket emphatically changed jerseys going from plain whites in 5-dayers to being strewn with a torrential colored downpour in T20s, Gilchrist was a symbol of solidity.

Not to mention, stability.

He was, in fact, the only consistent figure in an Australian set-up where mug shots of match-winners famously changed embracing Ponting, Waugh brothers, McGrath and Warne in 1990s to- Clarke, Watson, Johnson and Hussey in the 2000s.

What didn’t change, however, were dollops of runs that the famous Puma blade lavished.

Gilchrist, it seemed, persisted in similar fashion. When batting, he preferred to merely stub the willow onto the greens. It wasn’t a feisty throw of indifference, rather an indication of how confident he was.

It funnily seemed, you were compelled to deeply appreciate Gilchrist. You trusted him to put up a fight; you relied on him to provide Australia some respite.

This great game of ours has seen many a showman. You recount Lara for the daring, Waugh for the grit, admire Sachin for his finesse and stand in awe of Laxman’s grace.

But what’s your bond with Gilchrist?

Shouldn’t Gilly be credited for making it a level playing field for batsmen where- on one hand one saw the silken touch of VVS, Dravid, Cook and, Mohd. Yousuf, one also rejoiced in the Spartan-like daring of the Aussie?

Walking a tightrope between adrenaline-inspiring achievements on the turf and dodgy dealings by shadowy figures, cricket has oscillated between the good, the bad and the ugly resembling an adolescent youth desiring to enter a glittery casino.

But campaigners like Gilchrist- 96 Tests, 5500 plus runs, 287 ODIs and nearly 10,000 runs- lent equanimity to the game, essaying an unquestionable honesty.

When Australians were berated for resorting to lip service, cold-shouldering of opponents, Gilchrist was regarded for breaking into a smile.

Rebuke wasn’t for him.

Could there be any for a contestant who would willingly extend an arm in appreciation of a gem from a Sachin, Yuvraj, Chanderpaul, Younis Khan?

Often, before the umpires could be reached out to, Gilchrist would walk away. He knew it before the bowler did.

Not since a Gilchrist or Hussey has Australia produced another consummate competitor: a contestant who referred to conscience to uphold the dignity of the game.

Not only the burly power in that lithe gym-built frame.

If cricket was a minefield of records to many, to the likes of Gilchrist, who plundered tons of runs even beyond his peak physical prowess in ODIs- 892, 810 and 934 in 2005, 2006 and 2007 respectively- it was an opportunity to stay true to one’s instincts.

Perhaps that explains why Gilchrist left in 2008, a year where he struck 2 fifties and 1 hundred in ODIs.

Maybe, he would’ve wanted to gather more than 33 catches that year? Maybe he couldn’t add to the tally of his elongated, outstretched, full length dives on a wayward delivery by Lee or Johnson?

Maybe that was Gilchrist at his ethereal best. Honest to the core, sincere on every occasion. 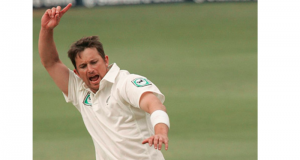 Dev Tyagi - June 7, 2021
1
Yorker-man Trent Boult was only twelve back then. The master of the short-pitched one, Neil Wagner just fifteen, and the ever- consistent Tim Southee had...