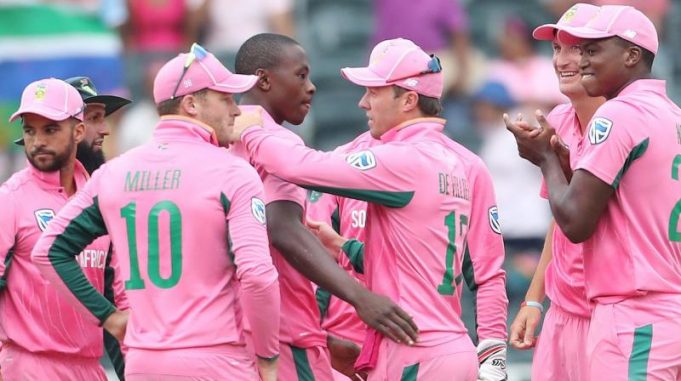 This is the mantra that has held South Africa in good stead for last 6 years with the bull ring being their fortress. As Shaun Pollock so beautifully described after the 5 wicket victory over India – the proteas play their perfect part in pink. Burly bodies. Unrelenting. Oozing positive energy. All collected. None isolated. In perfect harmony. It seems the Proteas are a different unit altogether when in pink; like raging fire.

Yesterday, the team managed to raise close to 1.7 million rand and the proceeds will go to the breast cancer clinic at the Charlotte Maxeke Johannesburg Academic Hospital. Cancer, the Proteas and Pink. It’s almost like two battles are to be won and depicted by mercurial strength of one side. It’s just that on February 10, 2018, there was a lot at stake. The series was going out of hand. Indians were ruling like there’s no tomorrow. South Africa had a lot to prove.

It’s so ironical to note that when it comes to playing to raise funds for Cancer awareness, the Proteas just don’t entertain the other c word – chokers as the world describes them. They play like true heroes and overcome every adversity. Something special anoints them. We’ve seen Smith mow down Australians in the past with the brutish pull of the bat. We’ve seen De Villiers launch a cannon in the West Indian dugout in the recent times.

Yesterday, it was a new force in motion. It seemed as if Heinrich Klaasen and Phelukwayo were ordained by the current state of helplessness to rise above odds. And so they did. But before all of that, a quick run-down on the pink history.

The pink day concept started way back in 2013 and it was Pakistan and then India that bore the brunt that time.

India’s first tryst with the Pink ODI was a thrashing at the hands of South Africa in December 2013, as Quinton de Kock hammered a 121-ball 135 to set up a 141-run win for the hosts. De Villiers’ role in that match was to provide the fireworks at the end, batting at No 4 with a 47-ball 77 studded with six 4s and four 6s. A fired up de Villiers, the captain of the side, made the most of the platform set by de Kock and Amla, on a track that offered plenty of pace and bounce – the effects of which were felt more on the Indian batting lineup, which folded for 217 in 41 overs. De Villiers and JP Duminy plundered 135 runs from the final 10 overs that night, on their way to posting 358 – one short of the score Ricky Ponting and Co had posted at the same venue in the World Cup final in 2003.

This was followed by the pure genius of AB against the West Indies in 2015 when he got the fastest 100 in just 31 balls. Remember he walked into bat only in the 39th over and scored 149 in just 44 balls to give the Proteas a memorable victory.

In 2016, Proteas had a must win game against England to keep the series alive and Christopher Morris played his part with the bat to give them a huge victory from a position of no hope when all was lost. Eventually the proteas went on to win that series 3-2 with the final win coming at CapeTown.

In 2017, the Proteas comfortably overcame a listless Sri Lankan outfit who seemed worse than an invitational 11 through the Test an ODI leg of that series. Dwayne Pretorious was the hero at the time with his figures of 3 for 19.

Coming back to the memorable victory yesterday, the Proteas had a difficult target of 202 in 28 overs thanks to DLS when rain and lightning struck. And it wasn’t Amla or ABD who got them there but new heroes in Heinrich Klaasen and Andile Phehlukwayo who played out of their skin, held their nerve, conquered the spin and were just brilliant.

When there is purpose and a cause to play or fight for, losing is never an option and that’s what the Proteas as well as all the patients fighting cancer have shown us. Playing in pink is truly a spectacle for the players and spectators alike.

Rest it’s all about come. Play. Conquer. Cancer for the Proteas on every pink day. What’s more the series is still alive and it’s all to play for. 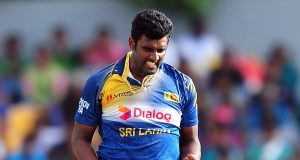 Is Thisara Perera The Right Man To Lead Sri Lanka?