In multiple ways Shikha Pandey’s life echoes ironies. Rather, make that challenges. Perhaps, challenges countering which Shikha Pandey has forged a memorable career for India. In Goa, the state she hails from, Football is the major sport. And is arguably more popular than cricket.

In the present Indian side, Shikha Pandey, a fast bowler brimming with confidence and backed by meritorious stats isn’t the name you quite find adorning newspaper headlines and magazine bulleted points etched in the fanfare and euphoria of Mandhana, Rodriguez, Mithali Raj and Harmanpreet Kaur.

The sport itself that Shikha Pandey represents may surely but slowly rising to the fore, but back in India enjoys unimaginable popularity favouring her male counterparts and compatriots. Still, the earnest and mild-mannered Pandey seems to be in reality the exact replica of the sincere athlete who simply turns back after delivering another peach of a delivery and makes gentle strides toward the bowler’s end.

It appears ever so honestly that the real thoughts clogged in Shikha Pandey’s mind may be about where the next wicket is going to come from. What seems to bother the right-arm medium pacer is how is she to continually generate lateral movement off the pitch and grab more purchase for fast bowlers even as it all may seem to be suiting batswomen.

Being the central highlight or the show-stealer in a contest- whether her efforts result in a win for India or not- don’t quite seem to bother Shikha Pandey on whose birthday you neither heard of a grand celebration hosted in her honour nor were there gilded news-pieces showing the fast bowler sporting dark shades and designerwear opening a cricket academy somewhere. That’s not Shikha Pandey.

Shikha Pandey- who’ll be considered the spearhead of the pace attack once the legendary Jhulan Goswami exits- is about pure emotion and unwavering focus in the midst of a contest, regardless of the format. Shikha Pandey is about the clench of the fist upon skidding a quicker one onto the batswoman’s stumps. Shikha Pandey’s is the first hand joining in the celebration to commemorate the fall of a wicket.

And in earnest, Shikha Pandey is about sensing the pain, lying down on the ground, gutted in the aftermath of India’s 11-run loss to England. The many diverse shades of a cricketer truly anoint a giving, emotive individual.

But what stands out in the cascading pull of emotions is the figure of a woman who tries every time she dons the bright blues and takes the ball in her hand. Perhaps what may be required from the perspective of the onlookers who would be to engage with some immensely powerful statistics that haven’t yet been glamorised?

When was the last time you didn’t hear of true cricket fan jump in joy or going off from the precipice of that sofa in learning a fast bowler’s economy- being 4.01 in ODI cricket in the contemporary game? This isn’t the only point that silently asserts Pandey’s presence in the game. Did you know her T20 economy rate is merely 6.8- a mark most fast bowlers and spinners in business today would give an arm or leg for?

A truly emotive cricketer who’s not a flair player rather a custodian of India’s fast bowling hopes, Shikha Pandey likes to revel as much in her successes as in those of the others. At 29, she’s hardly at the peak of her prowess. And given her penchant for fitness, we may see the proud wearer of the blue bandana exult in emotions for a long stint with Indian cricket. After all, she’s got to achieve her great dream: of encouraging and pushing more and more cricketers into the main stream of the sport given her and her team’s successes. 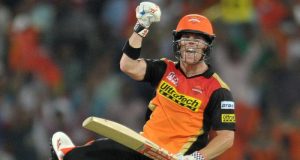 David Warner Is Owning The IPL Like Nobody’s Business