Cricket is a funny game, they say. Legends come and go, but their legacy lives on. Although the legend in question here has a different legacy left behind, one of a kind, where his next generation has to bear the brunt of him being an almost-perfect cricketer. You might have guessed it correctly by now, the subject of the talks is 18-year old Arjun Tendulkar, son of the great modern-day cricketer Sachin Tendulkar, almost a cult in India. Arjun is that one in a billion who has all the name, fame, wealth, talent, power and potential running in his genes. But can he get to his destiny with everything loaded on to him from the word ‘go’?

India doesn’t have many examples to take a leaf out of the book from. It has, maybe just one, that of Rohan Gavaskar. The junior could not emulate his father’s ferociousness and his career was limited to just 11 ODIs that spanned exactly eight months. A solitary wicket to boast of, and just 151 runs at an average of 18.87 did not do him any good either. However, he managed a more than a decent outing in first-class cricket for Bengal. Today, he has turned into a fairly successful commentator.

How often has this been seen in the post-independence era in Indian cricket? What does all this translate into? In a country like India, if you are born to an iconic player, a cult rather, the burden of expectations weighs, pulls and maybe breaks you to a huge extent. The media goes all guns blazing, and there you are, down and out mentally just because you carry that big surname on you.

The digital age with frequent social media backlashes is surely not a cakewalk for the current crop of players, and the younger Tendulkar might have just started to realise that.

As the saying commonly goes in India, all Indians are cricket fans and critics by default. While Sachin shouldered a million expectations with his constant rise and inhuman performances at times, Arjun has had to deal with them even before he stepped on to the field for the first time representing India in Youth Tests. He hit the headlines when he bowled to the England team at Lord’s in 2017 when his toe-crusher sent Jonny Bairstow into the medical room.

Also, his age-group selection for Mumbai squads also makes it to the news with his game under the scanner, more often than not. Why not, since he has got big shoes to fill, isn’t it?

Arjun made his U-19 debut a couple of weeks back against Sri Lanka. A highly anticipated one. What was supposed to be a normal match preview, match analysis or a match report on the whole by different mediums of media was all made out to be Arjun-centric. As he steamed into his delivery stride to bowl his first over as an India member, he already had demons waiting for him before he could mark his run-up again. He finished the two Tests with a total of 3 wickets in 4 innings and 14 runs. Not great numbers for sure.

These might be considered to be below-par performances for any other cricketer, but it is a crime when you have such numbers with Tendulkar etched in your last name.

It will probably be difficult for the media to draw a line on when to leave him alone, but the young lad has to surely learn the tricks of the trade fast enough and focus on his own career, and most importantly the art of letting go. Let’s hope he does.

India U19s defeated Sri Lanka U19s in two Youth Tests by an innings. Opener Atharwa Taide scored tons in both the matches, yet he did not make it to the public eye. Instead, Arjun’s lone wicket and a duck made more of a story. This fact really speaks volumes in itself.

Arjun’s is a career waiting to bloom and prosper. His journey hereon will not only be charted by his runs and wickets, but also about what is written about him, and how is he presented by different forms of media.

Will the teenager come out unfazed by all the media distraction? Can he fend off the unnecessary criticism and attention to make it big? Will India get another Tendulkar, this time running with a red cherry in hand?

We have all seen the bat raises and that look towards the heaven by Sachin Tendulkar during each of his hundred hundreds. Now is the time for Arjun to send the stumps walking down the park with the bails flying. Time will only tell what might happen to this prodigious son of India.

But his journey, nonetheless, promises to be a highly challenging one.

All the best, Arjun Sachin Tendulkar. 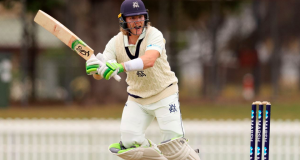 Abhinav Bose - November 26, 2020
0
India’s famous victory against Australia in the 2018- 19 series is by far one of the most glittering outcomes in the team's history as...