The West Indies will be batting on Day 2 of the five-dayer at Hyderabad.

Is the sarcastic brigade justly entitled to rubbishing aside the current team distributing free gifts?

Are their most die-hard fans – who’ve often hoped against hope for at least some form of a turnaround – finally breathing?

From the 90 overs of play on Day 1, under bright lights and a hot sun, the West Indies weren’t bowled out on the opening day.

Who saw this coming?

Surely not the fan whose hopes off seeing a Caribbean revival were stripped off by the spectacle of an experienced lot playing freelancing T20s coming to blows with a board that to this day, hasn’t suggested a way forward for amity.

That the West Indies have both crossed 200- their first major landmark, a basic they often fail to cover- and are nearing 300 is worthy of applause. But maybe more because of how badly they were hammered in the First Test.

It’s not that Christmas has come early for the tourists.

It’s just that the continued domination of the hosts- clearly, the stronger side- has been deferred, if at all, by a small margin of time; if at all, by the display of some fight that, once again, failed to point to capable batsmen like Brathwaite, Powell, and Hetmyer and was borne exclusively out of the effort of two men who decided to apply themselves.

Celebrating right now at the back of a small leap for the better would be about as childish as treating closing hours of business on Monday as the beginning of the weekend.

Nonetheless, there are some lessons for those batsmen who once again decided to warm the pavilion seats, giving up the temptation to endure for their side.

Just go a little deep on what happened on Day 1.

But when you consider that the 4 batsmen before Jason Holder and Roston Chase against India could face only 289 balls collectively, is when their feet suddenly appears important, pointing to a direction.

Finally, with 20 minutes to go, Holder walked off having nicked one to Pant.

But that wasn’t before the West Indian captain had hung around for 92 balls contributing a fifty.

The only deliveries that Holder may have faced to ‘acclimatize’ to Indian conditions may have been on PlayStation.

He wasn’t in Rajkot.

What is the rest of the lot doing?

In a series where the usual has happened at lightning speed- the crushing of an inexperienced group of Windies batsmen that resembles a clique more than a collective- the effort of Roston Chase against India seems to have established groundwork for the game to reach at least the fourth day.

He’d love to have his underperforming colleagues try it out there, at least.

And maybe there’s a sense that Test Cricket, at its very core, still asks of its batsmen to do the basics right. And that, once that’s done, the precarious situation contained, can the game then proceed further.

Roston Chase didn’t throw his bat at every single delivery.

In fact, he only struck one six.

He knows his job isn’t to blast India away, rather make something out of this Test that hasn’t looked like a contest, given the way his teammates batted previously.

We can give this phenomenon a coating of our imagination the way we want: “Chase loves sub-continental sides more; his best arrives against tougher opponents etc., the theories have already started!

But let’s not lose the plot.

Test Cricket has loved back Lara, Jayasuriya, AB, Gayle, Sehwag. They deserve all the love. They were the swashbucklers. They saw in both good and bad balls an opportunity to attack and collect runs.

But this format still belongs to the one who ‘tries.’ He needn’t be a Lara-like showstopper.

When you want fresh juice, you don’t run to a supermarket. You ‘grind’ fresh vegetables and fruits- don’t you?

It’s the churning that enables the freshness of taste.

At Hyderabad, Chase showed one and all that fighting it out against India isn’t like a theme of some Mission Impossible-like series, the kind of stuff that subliminal power-wielding heroes can pull off, the West Indies, it appears, ought to learn.

They needn’t be batsmen who should simply just attack bowlers, the way Hetmyer and Ambris’ dismissals, thus far on the tour, suggest.

In putting bat to the ball, looking for singles, rotating the strike and, simply, pushing all along- Roston Chase against India seemed a man keen to get the basic check-boxes ticked.

That the Roston Chase against India wasn’t some bedazzling match-winning hero, who was here to fancy the big risk-taking idea of smashing a Kuldeep and Jadeja out of the ground but merely a man who didn’t seem seduced by the idea of throwing it away was seen.

And let’s face it, it was an effort widely admired.

The only thing that now remains is to see how the Test progresses.

It’ll be daft to engage in Chase-worshipping. He’s not scoring runs for that. Regardless of whether he scores a hundred, he’s got to be credited.

The fan would much rather worry about how on earth could only one man seem determined to carry on, helped by his captain, as others around him appeared a bit more excited than Chase to spend time in the pavilion. 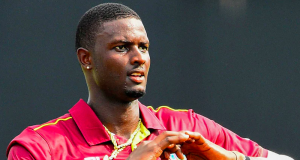 Why Jason Holder Needs To Rise In The ODI’s Vs New...