Cricket is a large-hearted sport; it constantly sweeps fans off their feat through a flurry of records. Its records are surprise offerings that seem placed in a Pandora’s box, though opening which doesn’t lead one to a swarm of bees, but rather, a treasure trove of joys.

But time has come to probe a question that beckons the interest of the fan and the pundit alike.

Are records sufficient in helping cricket catch the fan’s eye? Could it be that there’s something more?

Perhaps it may not be true to suggest the more cricket makes a fan anxious, at times, even going as far as testing one’s patience, the more it becomes an unmissable- not unwatchable- contest.

For instance, to the die-hard Indian supporter, the wait for Kohli’s 72nd international century, his last occurring back in November 2019, has kept the fan constantly on the tenterhooks. Think about the plight of the Protea supporter. When will his team lift a mega ICC trophy is a question so important to be smashed that it’s kept fans glued to their seat instead of abandoning it.

Though make no mistake.

The West Indian fan too has his plight. It’s one that concerns a particularly foxing question that no individual possessing Einstein-esque IQ can solve.

No side competing in international cricket can today walk on the field minus a match-winning spinner. Imagine India without Ashwin, Sundar, Jadeja or Chahal. Think England minus Leach. Conceive South Africa without Shamsi, the table topper of ICC T20I rankings. Can you imagine Australia in a T20I minus Zampa or Agar?

At this moment of time, regardless of which team’ supporter you are and wherever you might be, there’s, at least, one team in the forthcoming T20 World Cup that none are prepared to take lightly.

It’s the team Veerasammy Permaul has represented in international cricket, albeit the team to which he’s yet to become a regular part.

Incidentally, the West Indies are perhaps the only team that’ll enter the World Cup without an ‘established‘ match-winning spinner. In the likes of the very talented and young Akeal Hosein they have a youngster raring to go, albeit one who’s yet to emerge as a potent threat.

Devendra Bishoo is old, not walking crutches old, but old enough to be considered a spent force, even as in his prime, circa 2017, he shattered the Pakistanis with a massive match-turning 8-for, away from the breezy Caribbean comfort playing in the perspiring conditions of the UAE.

Then there’s Hayden Walsh Jr., whose excellent recent outing against the Australians in the T20Is, went a long way in proving detractors wrong who couldn’t have been doubted in noting the 29-year-old has conceded nearly 950 runs already from just 39 appearances.

The thing that works for Hayden Walsh and Akeal Hosein is exactly what doesn’t for Veerasammy Permaul of Berbice.

The duo have match experience and have, most recently, been part of victorious outings.

Does that mean Permaul has contributing nothing staggering?

The last that his selectors made him play a Test was in 2015, against the very opponent that made that crowned itself with the prized jewel of Cricket: the 2015 World Cup.

Permaul gave 124 of the 399 Australia scored in the first inning and bowled the most overs by a West Indian with 34. His first inning was a disaster, wherein the only wicket he took was of Josh Hazlewood, who’s only slightly better a batsman than is Shannon Gabriel. Though, in the next inning, the quiet spinner got the dangerous Shaun Marsh.

But the 2015 tour, unless one’s very much mistaken, was an exercise in experimentation: Bishoo playing the First Test, Permaul the next.

One odd game can never reveal too much about a player unless you are living under a rock or have a PhD in handing out quick judgements?

Yet, to this day, when one talks about Veerasammy Permaul, one cannot ignore two glorious efforts, both of which yielded a victory for his team, first whilst in Bangladesh, 2012, a time where the likes of Ramdin and Samuels were around. The next, his most-recent “best-versus-best” contest, which was envisaged by his cricket board in order to properly gauge their players’ readiness for the upcoming Pakistan tour.

While in the former, Permaul helped Windies beat Bangladesh at the back of a 3-for (8 overs, 32 runs), thus achieving in the process, his best-figures in Tests, in the latter, a practice game, Permaul collected a back-breaking fifer.

In 2015 CPL , he arguably produced the ‘bowl of the century!’ Pollard came down to a spinner that pitched around middle and seemingly held his line, only to turn left and clipping the off stump. Permaul didn’t jump or shout, simply went back to his bowling crease preparing for the next one. His Amazon warriors were all over the place with ceaseless celebrations.

What also hasn’t changed is the wicket-striking ability and that penchant to outfox batsmen, even as one of Berbice’s most under-appreciated export to West Indies cricket has turned 32.

Moreover, what also hasn’t changed is the frustration of the West Indies fan hanging out on social media sloganeering in favour of a cricketer who, with the passage of time, seems to have become a captivating, moving melody. Think a folk song that becomes part of a village’s cultural lore, though one that hasn’t yet found a Grammy stage to have his voice heard by international media.

That Veerasammy Permaul is talented is something few can doubt and even fewer will be keen to offer a counter theory to.

This, to the fan who hangs out less with family and more with gadgets, for whom cricket is often about the wham-bam DNA of T20s, not much about the old-fashioned virtues like patience, may seem like a harmless fella.

Though, true to the in-born warrior who doesn’t believe in quitting, Veerasammy Permaul hides a beast within, one waiting to explode on the 22 yards.

A man against whose name rests the most eye-opening statistic- rest 536 first-class wickets. Someone who’s bowled no fewer than 11,000 deliveries, a man of a certain degree of persistence who’s been around since 2012.

A man who still fancies playing for a team, which perhaps unbeknownst to him as well as the fan, seems to have little interest to entertain the little Guyanese.

Things, and there’s little sense in hiding what’s happening out there, have reached such a level where not a day passes by on any West Indies Facebook group where there one doesn’t read comments accusing the board of sheer indifference and perpetual ignorance being resorted to in Permaul’s case.

But the bowler carries on, uncomplainingly so. All West Indies fans may have felt his hurt where despite his shining fifer in the best-vs-best, Permaul, believed to be inducted in the upcoming Tests was let go off as if a fly is picked and thrown out of a glass of milk.

That Hetmyer too isn’t there against Pakistan is something that’s only gone on to exacerbate the fans’ woes.

Moreover, it unwittingly pits a Guyanese supporter against the one rallying behind a Trini or a Bajan. Not that the West Indies cricket board needs to settle an unresolved strife on social media stratosphere; it does need to come up with something that, at least, looks like a satisfying answer regarding the ignorance shown to Veerasammy Permaul.

This, by the way, is a man who’s far from being a cricketing have-been. A fighting fit cricketer who’s got a lean frame and one who prioritises fitnesses as much as the painful tedium of bowling long spells in the net would definitely want the sun to shine on him.

But is the weather sweet? Can he again make it to the West Indies?

“West Indies Need To On Their GPS,” Vernon A. Springer As Team Gets Bundled Out For 55! 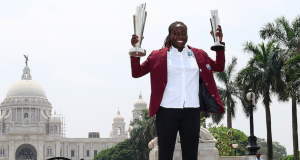