There will always be careers that’ll be remembered for their sheer longevity. The site of a teenaged Sachin is just as precious as the maestro who last walked out to bat, two and a half decades upon his arrival.

There’ll be careers that’ll be revered for all they achieved, unrestricted by cricket’s tiring geographies. A young Lara scoring 277 in Australia, then scoring 400 not out back in the Caribbean, two decades later, going ever strong. The magician Warne turning it just as well in 2013 when he’d first twirled in 1992.

At the same time, there’ll always be careers that one would feel were surprisingly short-lived and may just have continued before the end crept up suddenly.

But then not all journeys are unrewarding.

Yet, in order to examine their true impact, it’s important to subject some journeys in international cricket to a microscopic assessment.

In hindsight, Pat Symcox, who has turned 60, had a rather brief run.

And despite playing for no more than half a decade, he put in performances that suggest his was a career that may have been assessed rather lightly.

The fact is, no effort in establishing the prominence of South Africa in the nineties may be rendered complete without running into what a fairly unsung figure achieved.

The West Indies were on song against a dangerous and tricky opponent in South Africa.

Even as the first wicket went down cheaply, one man was holding the fort. He would prove to be the Proteas’ nemesis.

Running out of clues on getting the danger man out, Cronje tosses up the ball again to Pat Symcox upon the end of the 27th over the score reading 145 for 1.

What follows next is a vignette of ephemeral strokes, all of which have been carted around the point to the mid-wicket region.

So intense is this assault, eventually resulting in 5 boundaries, that Pat Symcox can be heard loud and clear, bemoaning an “Oh” on the middle-stump mic.

The pendulum is flickering away from the South Africans.

Then on the final ball of the 37th over, the spinner tosses one up, perhaps deliberately, only for Richie Richardson, the captain, to hold onto Kirsten stationed at the deep mid-wicket boundary.

A breakthrough is reached, finally.

But the big fish is still out there.

All dread the executioner may further bully South Africa.

Instead, in the 40th over, Pat Symcox drops one around the legs, only for the batsman to mistime one that is deposited into the hands of Pollock, stationed at square leg.

The mighty has fallen.

To this day, one wonders what might have happened had the Prince not been dislodged?

But cricket treats its subjects often too woefully. We remember only Lara’s heroics that sent South Africa back home.

Everyone forgot that it was Pat Symcox who won the battle in the end.

Just like he had a major hand to play in dictating a South African battle against Sri Lanka, in the final of the 1997 Quadrangular cup (Sharjah), a victory that even those die-hard fans may not remember, who to this day, cannot get over the ill-fated 22 needed off 1.

Truth be told, there are far greater glories to revel in when it concerns this incredible force of cricket.

Asked to chase a seemingly simple 210- Vaas and Mahanama had sent Hudson and Kirsten back in the dugout, respectively, even before the South Africans could reach 50.

In came Pat Symcox, the bully Sri Lankans had never expected him to be.

By first in sending Dharamsena for 2 glorious and lanky sixes over deep mid-wicket, the right-hander first normalized a flickering scorecard, and then stitched a valuable 31-run stand (with Klusener) to revive his team.

The massive hits weren’t a result of blind pinch-hitting.

They carried a statement of intent.

Signaling the South Africans weren’t in it to be mishandled.

Yet, one may only concern the self with a fine knock that ended soon, 15 coming off just 10 when the man did so much more.

Against a team comprising 6 frontline- batsmen, Pat Symcox helped his team’s cause by putting an absolute break on the scoring.

Probably if someone told you there no other came close to challenging Murali’s economy, you’d have rubbished the claim.

But bowling to a team that, only months before, had crowned itself as world champions, Pat Symcox’s spell- 10 overs, none for 37, pulled back the game in his team’s favor.

It was a perfect demonstration of what Pat Symcox truly provided- the man who offered utility to a side that attacked with a mighty make-up.

The one who could dance down the track with reasonable success when you thought only Kristen, Cronje and Rhodes could do so.

And as the spinner in a pace heavy attack who could prove himself worthy of a dialogue with the ball when there wasn’t a need to argue with the bat.

Nearly every conversation about South Africa concerns itself with the baffling wonder of its genius and bowlers who made wickets cartwheel.

We are reminded, and rightly so, about fielders who defied the laws of physics to produce unspeakable wonder.

Maybe we forget that what keeps a daunting side truly afloat are conservationists who contest with consistency and commitment.

Much before an Imran Tahir or JP Duminy made the art of spin and big-hitting such fun, there was Pat Symcox, who nearly always brought back the goods given the limited chances he was afforded.

While on the face of it, the man who fetched only 72 wickets from 80 ODIs may seem like the holder of a sedate record, in reality, Symcox’s is a conundrum that arrests one’s attention the moment one shows a keenness to delve in.

Nothing could be truer than his reasonably modest Test accumulation. How on earth are 741 runs from 27 Test outings even worthy of greater deliberation?

But how on earth is it ever easy to become the only batsman in a game of countless ingenious scorers to score a fifty from no.8, 9, 10, and 11?

Which all-rounder with treble his experience has been able to stitch a world-record stand in Test cricket at the 9th wicket?

It wasn’t Kallis or Kirsten who stitched the key 195-run stand, a world record (1998, at Jo’burg’s Wanderers) for the ninth wicket with Mark Boucher at the other end.

It was the man who stroked more than half of his Test runs- 392 of his 741 runs- through boundaries and sixes alone.

But it didn’t take fluent scoring alone to be part of the greatest lower-order stand for Proteas in Test cricket. It took heart and might to keep a Waqar at his prime, and a fearsome Shoaib at bay whilst batting for 226 minutes, having arrived with the scoreboard reading 8 for 166.

Yet, there’s something unforgivingly painful about the Pat Symcox story.

Was this a career that began blossoming much later than its architect may have desired?

Or was it just meant for quick thrills and match-winning efforts that perhaps warrant greater attention?

Or could it all be that there are some careers that philosophically point to a no-reaction, a bit like Kimberley’s very understated diamond’s ODI debut, that resulted in a no-result versus Sri Lanka? 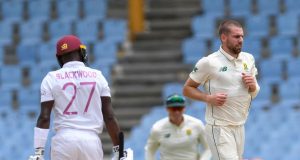 Pranay Rangra - June 14, 2021
0
In my last article, I had mentioned if The Proteas harbour any ambitions of toppling the West Indies, they have to change their buzz...