There is something about Ireland, England and 329. Remember the 2011 World Cup game in Bengaluru and Kevin O’Brien’s heroics? While the target in that game was 328, Ireland finished with 329 which was their first-ever 300+ total in ODI history. And now, more than nine years later, they’ve replicated the same performance against England again and scaled their highest-ever run-chase in ODI cricket.

It was history back in 2011 and they made history once again in 2020. If it was the flair, youth, and exuberance of Kevin O’Brien in 2011, it was the experience and solidity of Paul Stirling and Andy Balbirnie in 2020.

England were Ireland’s first-ever opponents in international cricket. But including that maiden game in 2006, Ireland have faced England in just 15 international games, out of which 13 are ODIs. Before 2020, Ireland and England never played a three-match ODI series. The maximum number of games in a series was two and that came back in 2017. Usually, it was just a one-off game or World Cup encounters.

Hence, this was Ireland’s chance to impress. It was the resumption of ODI cricket after 139 days due to the COVID-19 lockdown. However, it wasn’t to be. While they didn’t win the series, but they got better every game. In fact, they even threatened to win almost every game.

The Ireland side did get into good positions in the first two games despite their top-order faltering. There is a reason why England are the world champions and the best ODI team in the world. And they proved to be too good despite the unavailability of quite a few of their first-choice players.

A whitewash was on the cards and England were overwhelming favourites going into the third game. And for the way, Ireland had played, it wasn’t a surprise. However, it was Ireland turned up a surprise and finally beat Eoin Morgan and co in that final ODI at the Ageas Bowl in Southampton.

Chasing 329 was never going to be easy. It needed multiple records to be broken. 326 was the highest successful run-chase on English soil. Never have Ireland hunted down 329 in an ODI. In fact, their highest ODI total is 331 – twice which came against Scotland (2015) and Zimbabwe (2018). Only three teams had chased more than 329 against England before.

Hence, history wasn’t really in favour of Ireland. But Ireland’s two best batsmen set it up before it was O’Brien took over along with the 20-year-ild Harry Tector and absorbed pressure to guide the visitors over the line. It was just Ireland’s second win over England but a special one nonetheless. It was their first ODI win in 2020 as well.

And the fact that it came on the back of them opting to play youngsters and backing them throughout the series, makes it even better. They didn’t play the experienced William Porterfield in any of the games even though the top-order failed miserably in the first two games. They backed the likes of Harry Tector and Gareth Delany in the top four.

Although Ireland would want to have better consistency. Not only from their players but as a team, overall. They’ve played 33 ODIs since the start of 2018 and have won 15. And it’s the batting that has wobbled quite a bit. Apart from Stirling and Balbirnie, no other player has even averages 30. Only four players have scored a hundred in since January 2018 and one of them is the retired Ed Joyce. The other three are Stirling (three), Balbirnie (six) and Porterfield (two). That just underlines Ireland’s batting fragility. 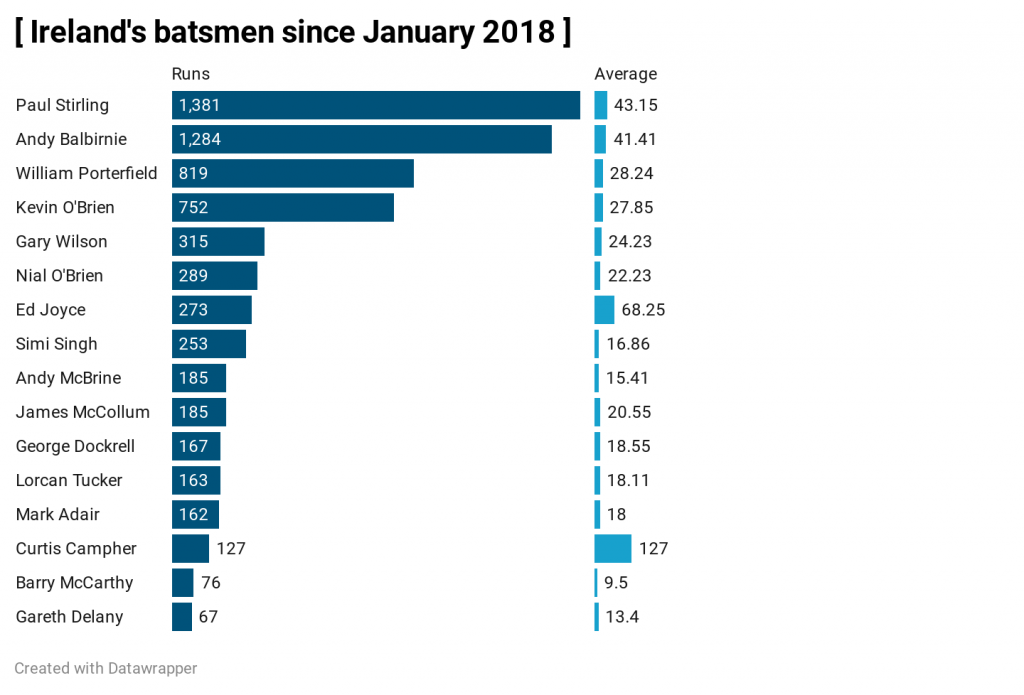 The batting seems to be heavily dependent on the two stars in the top three along with O’Brien in the middle at No. 5 or 6. Thus, Ireland need to build a solid batting core pretty soon. O’Brien and Porterfield are on the wrong side of the 30s and may not be around for too long. There is promise, but the dependency on Stirling and Balbirnie is slightly overwhelming.

Can the others, young that they are, chip in?

Meanwhile, the bowling has been decent but it has gone through an overhaul. Boyd Rankin might be on his last legs in international cricket. Tim Murtagh has stayed with Middlesex and will not play for Ireland. But it is with the ball, they’ve been somewhere close to their best and staying afloat many times.

Every time Ireland have had the ball in hand, they’ve made things happen and gave themselves a chance. Hence, the likes of Mark Adair, Craig Young, Joshua Little, Andy McBrine, Simi Singh and Curtis Campher form a decent bowling crop.

In fact, Campher was their big takeaway as the 21-year-old all-rounder was Ireland’s MVP in this series against England. At one point in the series, it even looked like it was Campher vs England. Campher was carrying the entire Ireland team on his shoulders with both bat and ball. It was a dream debut for the South African-born.

Tector showed great maturity in the last game. Delany has shown a lot of promise in the shortest format. Little and Young are two promising fast bowlers alongside Adair. Thus, there is a lot to look forward to where it comes to Ireland. But as mentioned, they would want a little more consistency from the players and as a team.

And maybe the ICC Men’s Cricket World Cup Super League will push them to do that. They’ve got off the mark with a historical win and fetched 10 points. They’ve shown glimpses of what they can do. If you look at each of the three ODIs against England closely, they had the world champs on the back foot in each of the games, especially with the ball.

Thus, Ireland were defiant in this series but they have some distance to go. A little more consistency could well see them push for a case in the top 10 and even push a direct spot for the 2023 World Cup. 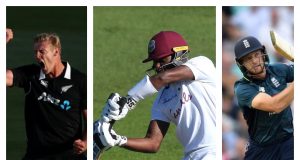 Sahil Jain - December 30, 2020
0
Cricket in 2020 could've been poorer without some really outstanding performances that gave us much to remember. Was that ever going to be any easy? Well,...