Thanks a lot for your love and support throughout. From 1929 hrs consider me as retired.

This is how easily he summed up his retirement. A montage of pictures which included all the ups and downs in his cricketing journey, some nostalgic moments with his teammates and a Mukesh melody, ‘Main Pal Do Pal Ka Shayar Hoon’. For a moment, it left people figuring out if he had actually bid adios to the game. But remember, even his arrival was less of a climax before he went bang.

16 years ago, when a long-haired youngster from a small town arrived into the cricketing circles, he wasn’t the center of attraction then too. His first few stints with the bat read 0, 12, 7*, 3. It was his fifth game when Indian captain Sourav Ganguly promoted MS Dhoni in the batting order. India had lost Sachin Tendulkar and that’s when the new wicketkeeper walked out to bat.

What followed was a magnificent knock of 148 runs from just 123 balls. Dhoni had announced his arrival in style. The wait to see the lion in his hunting grounds didn’t last long as he scored an even spectacular 183 runs from 145 balls against Sri Lanka, six months later. This knock was even more magnificent because of its belligerent demeanor. It’s one thing to hit ten sixes in an innings but to be the aggressor of the chase with someone like a Virender Sehwag at the other end was terrific. He went into destructive mode tearing apart the Sri Lankan bowling attack and helping India register a chase of 299. This was just the beginning of MS Dhoni slowly carving out a place for himself in the Indian team for years to come.

During the same phase, India went on to register an impressive record of 16 back-to-back successful run-chases. It’s safe to say that Dhoni was the architect of this spectacular streak alongside Yuvraj Singh. He also rose in the ICC rankings and became the only Indian after Tendulkar to be ranked the No.1 batsman. He continued to stay in the Top 10 rankings for more than a decade, adding another feather to his cap.

You’d said Australia were the favorites. Today I think I and the boys, we proved you wrong.

The legend of MS Dhoni continued to grow as he was handed over the reins of a young and inexperienced side for the 2007 World Twenty20. Just a few months back when India suffered an early exit from the World Cup, his effigies were burnt and stones were pelted at his home. Leading a team full of youngsters to victory in the inaugural edition of the T20 World Cup with his instinctive and mind-blowing decisions was extraordinary to another level. The same fans who bashed him were celebrating Dhoni in the streets all over the country.

The next big challenge of his captaincy came in the 2008 CB series where India went ahead without two stalwarts, Ganguly and Dravid. What next? India went on to trump World Champions Australia in the Tri-Series final not once but twice as a young side brimming with confidence. An interesting thing happened in the second final. As the Men in Blue were on the brink of a victory, Dhoni passed on a message to the Indian dressing room not to celebrate. This was Captain Cool’s way of showing Australia that they had been conquered and it wasn’t just an upset.

During the 2009 World Twenty20 when reports of a possible rift started gaining mileage in the media, Dhoni brought out his entire team to the press conference to give a statement of their unity. That was probably the only time he took the Indian media personnel seriously. The same year, India’s victory in the Compaq Cup meant that Dhoni’s men had gained the numero uno spot in the ODI rankings for the first time. He also took India to the top spot in Tests and held the mace. He went on to win the ODI Player of the Year award for a second consecutive year and was also bestowed with the Padma Shri.

I don’t mind repeating everything.

A cricket crazy nation had dreamt of winning the World Cup for almost three decades. A whole Tendulkar career spanning 22 years had gone by without gracing the coveted trophy even once. It was the World Cup final at Wankhede Stadium. Dhoni had won the toss but there had been some confusion because of the crowd noise. He didn’t mind having the coin spun for the second time and losing it. Here was a man who at the pinnacle of the biggest tournament in world cricket, felt gracious enough to get it done again.

While chasing 274 for victory, India faced a couple of hiccups and were reduced to 31/2 and further 114/3. With Muralitharan looking dangerous, he decided to step up and take the game in his own hands despite not being in the best of forms throughout the World Cup. Many were shocked to see the captain walk out to bat above the man-in-form Yuvraj. Every time the run rate climbed, Dhoni released the pressure with a boundary as he and Gambhir started building a match-winning partnership in the middle brick by brick. He stayed till the end and finished it in style.

That’s the thing about Dhoni. He was always a gutsy man and didn’t shy away from showing off his prowess. The repercussions could’ve been career-threatening if the move of promoting himself to No.5 in an all-important World Cup final hadn’t worked in India’s favor. The six off the final ball has become etched in the entire country’s memory forever. To create that sort of an impact in such a short time, to become a World Cup-winning captain and join the elite list of Clive Lloyd, Kapil Dev, Allan Border, Imran Khan, Arjuna Ranatunga, Steve Waugh, and Ricky Ponting. To instill a place in the hearts of the fans as well as the haters. Dhoni had done the unthinkable.

God is not coming to save us.

After the World Cup, India underwent a whole transition period under his captaincy. Within a couple of years, he brought in a pool of young cricketers in the Indian squad as they looked set for the 2013 Champions Trophy. This was India’s first major ODI tournament in years without Sachin, Sehwag, and Yuvraj. Dhoni did a wonderful job of keeping the team away from the outside chaos which blew up before the start of the Champions Trophy. India didn’t lose a single game in the tournament and were pitted against hosts England in the final match.

An ODI reduced to 20 overs per side, the way Dhoni rotated his bowlers, especially his spinners were praiseworthy. India managed to defend a low total of 129 as the skipper was in full flow with his direction to the bowlers and even the fielders which was quite audible due to the stump mic. India ended up winning the Champions Trophy as Dhoni became the first-ever captain to win every cricketing title. This was a huge win for the Dhoni-led side to restore the faith of the fans, just when it seemed that the fixing demons of 2000 had come back to haunt India.

Whether it was in the Tri-Series final at the Port Of Spain or in Mohali against Australia, MS Dhoni single-handedly took the responsibility to finish it for the team.

The period following this was interesting as every young player that Dhoni had backed to the hilt started exhibiting their performances at the bigger stage. Rohit Sharma turned to a Hitman as he was handed over a new lease of life as an opener. Ravichandran Ashwin went on to establish himself as the greatest off-spinner, the country has ever produced. Ravindra Jadeja continued to win laurels and surely not in bits and pieces. Virat Kohli who had always shown signs of his supremacy was recreating chapters in the history books. Ishant Sharma turned his game and repaid the faith that Dhoni had engulfed in him for years.

I have three dogs at home. Even after losing a series or winning a series, they treat me the same way.

When Dhoni couldn’t finish a game against South Africa in 2015 as he failed to score 11 in the final over off Rabada, many felt he was finished. The very next game, MS Dhoni’s 92* helped India recover from 124/6 and eventually led to a victory. The sequence continued as every time Dhoni failed to live up to his standards, there would be speculations over his spot in the side only to dry down with his next match-winning performance.

Till the full stop doesn’t come the sentence is not complete.

MSD soon enough handed over the baton to Kohli when he felt it was the right time. He wasn’t just a wicketkeeper-batsman in the playing XI but also a mentor. Young players like Hardik Pandya, Jasprit Bumrah, Yuzvendra Chahal, and Kuldeep Yadav found solace in him. He was always present in the field for Virat during crunch situations. He was the man India looked up to, every time the umpire shook his head after a half-hearted appeal by the bowler. He could hit the bullseye with his eyes closed.

He was a man who didn’t want to put himself into frame every time India won a trophy. He cared less of the perception about him outside the game. He didn’t always play to win. He believed in the process. Often proclaimed as the man with the Midas touch, he was magical throughout his journey. He made the fans believe that no matter what the position, India could always fight their way back.

Perhaps that’s the reason, most of us were hooked to our television sets despite India being reduced to 5/3 and further 92/6 in the World Cup semi-finals. Because this man taught us that miracles do take place. Even though he couldn’t power India to victory that day, he did it on numerous occasions when we had exhausted all our hopes. As he walked away in silence, it wasn’t just the World Cup dream that was shattered. It was also the winding up of one of the most illustrious cricketing careers. The end of a major black swan event. An athletic wicketkeeper, an unorthodox batsman, a marvelous captain! There will never be another MS Dhoni.

I’ve been reading books on Dhoni,

The legend and his kingdom,

Achilles and his gold

Hercules and his gifts

And Batman with his fists 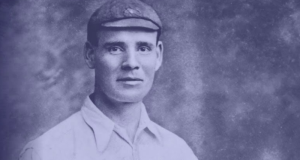 Why Is Sydney Barnes Considered Among The Greatest Bowlers Ever?