It all comes down to this: Australia Women vs England Women for the 2022 Women’s World Cup finals. One could say it was destined to happen given the number of times both sides have played each other over the past few months, but these sides could not have had more contrasting routes to the final.

So how is that?

Australia women were favorites before a ball was even bowled and rightfully so. They are the best side in the world, have plenty of world class players in their ranks and are exceptionally well captained by Meg Lanning. The team has had an unbeaten route to the final, so the law of averages would say they are due to lose one. However, to say that demonstrates a lack of knowledge about the character of this Australian team. This team handles pressure moments better than any other team in world cricket at the moment – male or female – and no one knows this better than their opponents. Just a few months ago, these sides clashed in one of the greatest women’s test matches ever. England were seemingly cruising towards victory, until Australia, under immense pressure, came storming back to within one wicket of victory before they ran out of overs.

Australia effectively has all bases covered. Their regular top 5 of Rachael Haynes, Alyssa Healy, Meg Lanning, Ellyse Perry and Beth Mooney are all in fantastic form with the bat, having each won at least one player of the match award on route to the final. They have a varied bowling attack, that combines pace, swing, left arm spin, off spin and leg spin: an attack composition that most sides would dream of. They are also right up there as one of the best fielding sides of the tournament.

It is hard to find any significant weaknesses within the Australian side, but there a sense that their bowling can be targeted. While many of the pitches in this World Cup have been very batter friendly, there have been times where the Australian attack has not looked as potent as perhaps it suggests on paper. Therefore, for England to have a chance in this game, their batters need to take on the Australian bowlers, though this is easier said than done.

Despite missing Australia’s last two games through injury, Ellyse Perry, if she plays, will be key for Australia in the final. Perry loves playing against England and before her untimely injury she was having a good tournament with the ball. She has one of the highest dot ball percentages of all bowlers at this World Cup and when she takes the new ball she almost always delivers for her side. An in-form Perry with the ball sets the tone for the rest of the attack to follow. Therefore, the Aussies will be banking that their star allrounder is fit to face to old enemy on Sunday.

In contrast to their rivals, England had a terrible start to the tournament, losing three matches on the trot, leaving them on the brink of elimination. However, in true champion style, they bounced back and have won 5 consecutive games, 4 of which were very convincing victories. They look to be hitting form at the right time and are undoubtedly full of confidence. Going into Sunday as defending champions and playing their greatest rivals will also surely add extra motivation. Arguably, England’s bowling has been their saving grace in this tournament, specifically the #1 ranked bowler in the world Sophie Ecclestone who has had a fabulous World Cup. The addition of Charlie Dean, though shortening their batting, has also added additional wicket taking ability to the line-up, while Anya Shrubsole seems to be hitting peak form at just the right time as well.

However, England’s batting is a cause for concern. Katherine Brunt, though more than capable, is slated to bat at 7 and this makes them look a batter too light. Their batting has arguably only truly fired twice: in the first game against Australia and in the semifinal against South Africa. Taking nothing away from their fantastic semifinal victory, their batting innings could have looked very different if South Africa had not dropped the innings centurion Dani Wyatt four times. Therefore, regular wickets could put them under significant pressure so they will need their top 6 to step up on Sunday.

The key battle that will decide this game will be Australia’s batting vs England’s bowling. Therefore, Katherine Brunt will be key for England with the new ball. Though she has had a poor tournament by her high standards, she loves playing Australia – and she loves taking Alyssa Healy’s wicket. If Brunt fires, and the other bowlers support her, England can win this game.

There is something about this side right now that seems impenetrable. Though unbeaten, they have survived several pressure moments in each of their games, with a different person stepping up each time. Ultimately, this is the difference between them and other sides in the world at the moment: their ability to handle pressure is second to none. England has the form, attitude and the talent to push them hard, but expect Australia’s superiority to reign on Sunday. 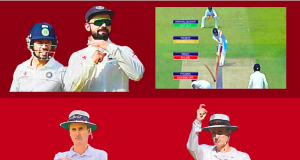 Ayush Gupta - July 24, 2020
0
The umpire's Decision Review System (DRS) is a major innovation in cricket. Not only it gives viewers an idea about the accuracy of an...