India Women’s side did go down fighting in the recent World Cup, a series where many thought that easy wins would come their way especially given how strong a talent pool the team contested with. But in the mother of all sporting battles, i.e., the Cricket World Cup nothing ever comes easy. Add to that the fact that the opponents India locked horns with weren’t lame pushovers by any stretch of the imagination.

Australia, eventual winners rather unsurprisingly, had the quintuplets in Perry, Lanning, Healy, Schutt and Gardner. The White Ferns attacked with Frances Mackay, Suzie Bates, Sophie Devine, and Lea Tahuhu. Meanwhile, when India faced England, even that didn’t come easy given how a strong a line-up featuring Knight, Beaumont, Brunt, Sciver and Shrubsole was.

While there were some mega wins in contests against the West Indies women and Bangladesh, where India just didn’t allow batters to put bat to ball, they found their strengths tested when battling the giants of the game. That India didn’t beat a single semi finalist of the Cricket World Cup of 2022 is something the administration must think about just the way the team should collectively muster about.

But yet, there were quite a few positives to write home about; individual performances and bold moments of play that defined the way India women’s unit plays: always with heart and never minus a fight.

So let’s rewind to the most definitive moments from the World Cup for the India team:

India Women’s side was on a verge of a collapse having been reduced to 114-6, which is when they were 96-2, the collapse striking at blitz pace in a span of ten overs. That is when the CWC 2022 perhaps witnessed one of its more inspiring moments: Sneh Rana and Pooja Vastrakar coming to the party together when one least expected.

They negotiated the spinners well and continued to sweep against Pakistan’s skilful attack cutting no corners. This kept the scoreboard ticking and as the innings progressed they struck boundaries at will. They paved a century stand and each of the debutants in the World Cup notched up maiden fifties in the opening match for the country.

India’s hunt for all-rounders who could bat especially in pressure situations and stabilise the innings was finally over. Even though sterner tests still await the duo, it could be said that the way Sneh Rana and Poojra Vastrakar applied themselves despite knowing well that the big guns- Mandhana, Harmanpret and Mithali were back- says a thing or two about how well rounded a team India is at the moment.

Later, Pooja was bestowed with the player of the match honours for her match saving knock of 67.

India Women’s side made a few changes to its batting order in the crunch game against the White Ferns, which is perhaps why a target of 261 seemed gettable. This is when the side were up against a capable bowling attack featuring Hanna Rowe, Frankie Mackay, Amelia Kerr among others. But when it came down to the real chase, the top order batters followed a defensive approach to get through the powerplay overs resultantly out of a strong pace attack. It didn’t take long for the side to face pressure: India required 210 off 185 balls. This is where Harmanpreet Kaur unleashed herself playing beautifully despite the added concern of key wickets; at one stage India were stuck on 50 runs inside 20 overs.

The gifted right-hander first toiled for runs and then played with quick tempo. With the required run rate rising ever so constantly, the Punjab batter reduced the pressure by smacking 20 runs in a single over off Jess Kerr.

If there was truly an inning that marked the comeback of the dashing vice-captain, then this was it.

India’s experienced duo put on a massive partnership to take India racing towards a mammoth total of 317. Surely, the West Indies women would’ve expected a tough day out in the field knowing Mandhana’s penchant for going big against them; the left-hander had scored a century against Taylor’s side in the 2017 CWC as well.

But the way the combative Indian duo steamrolled the bowlers was painful from a Caribbean perspective but enjoyable if you were an Indian supporter.

The left-hand and right-hand pair put on a 184-run partnership to deny West Indies any chance of a breakthrough. They stabilised and notched up a fine stand where they began slowly just by negotiating with the initial pressure. After negotiating the initial tough phase, runs would come at ease. The acceleration began after the duo notched up their fifties. Smriti Mandhana was in sublime touch and Harmanpreet Kaur in terrific form. The boundaris no longer seeming out of their grasp.

Kaur’s clean striking of the ball took the game away from the control of the Windies as the momentum shifted to the India’s stable after the duo settled down and took the game deep from a crunch situation where at one stage they were quick to lose three early wickets.

She’s bright, bold, and is above anything, a thinking cricketer. This is the time of Sneh Rana and the right arm spinner is settling well in her role as a lead all rounder of the India women’s side.

Ever since her selection in the 2021 series in England, the Dehradun cricketer has been on the go. In the contest against Bangladesh, a time where India’s qualification perhaps over West Indies still looked quite certain, Sneh Rana was introduced in the middle overs and it didn’t take her long to strike.

Once the opening batters were removed, Rana didn’t allow them anytime to settle down. She dismissed Nigar Sultana and Rumana Ahmed in consecutive overs. The batting’s back was broken and further damage was on its way.

It wouldn’t take long for the match to turn completely in India’s favour. Rana’s full-length and lofted deliveries returned miscued strokes in the hands of the fielders. Rana once again ran through the lower order and sealed the match for India. This was her first 4-fer in her career and could there have been a better occasion in which to bring her best bowling figures other than a World Cup contest? With the bat, she struck a fluent 27 runs to push India to post a sizable target. Her rise in becoming a reliable troubleshooter for her opponents is one of the brightest chapters in recent cricketing history for India women’s side.

To some, she may seem nothing more than a pocket-rocket. To others, she’d probably seem like a ‘see-the-ball-hit-the-ball’ cricketer. But to her India Women’s stable, the Haryana batter is a dangerous and gifted player that can simply smash her opponents out of the park.

One saw a recent example of this in the contest vs the dangerous Proteas women. India needed a good start in the must win match against the Proteas. And Shafali Verma rose to the occasion and delivered the promise, her 53 runs part of a knockout punch that proved difficult for the likes of Ismail, Kapp and Khaka to deal with.

She went after South Africa’s best bowler Shabnim Ismail and the legend of the sport was left clueless of the carnage that she unleashed. She smashed four boundaries in the two overs Ismail bowled during the powerplay, a moment of savagery that defined India’s approach in that must-win game of the World Cup.

Frankly, it was only due to Shafali’s effort that India reached its highest powerplay score of 68 runs in this World Cup. She’d eventually reach a magnificent fifty off just 40 deliveries. For as long as she was at the crease, the South African pace contingent were under pressure and were feeling the heat. Just how often does that happen? 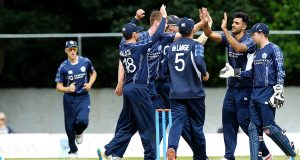 Shruti Banerjee - July 26, 2020
0
The global pandemic COVID-19 outbreak has caused disruption to sports across the world including Cricket Scotland and brought the world into a standstill. While the International...