We have all witnessed some spectacular super-overs. Have we not? This time, though, our women in blue took control by defeating the mighty Aussies. This was Australia Women’s first WT20I loss in 2022, and if any team could have done it, it was the Harmanpreet-led group.

After losing the first of five T20WIs, India Women needed this victory to gain momentum for the remaining ones. Australia Women posted a massive total of 187 for the loss of just one wicket.

India Women, in response, gave their all while chasing, with Smriti Mandhana shining yet again and scoring her twelfth fifty while chasing, the most by any woman in the WT20Is. She scored 79 off just 49 deliveries, with Shafali Verma kicking off the chase with 34 off 23 deliveries.

And who can forget the heroics of wicket-keeper batter Richa Ghosh, who scored 26 runs off 13 deliveries in the end to level the scores?

It was all up to the Super-over now.

Richa Ghosh smashed the first ball of the super over for a huge six over long-on, but was caught on the second ball. The honest bat succeeding with a bit of dare on the first delivery, but not quite on the other. Smriti Mandhana finished the job, bringing India’s total to 20, which was quite something even for a team like Australia.

Australia, led by Healy, lost the Super-over and the match by five runs.

Could It Be That Richa Ghosh Is The Game-Changing Finisher India Need?

Richa Ghosh was way too young when she first stepped onto the field in the Indian colours. She made her debut back in 2020 and that too, against the very opponent she spirited India’s run chase against in Mumbai.

Yet, that the rollicking right hander who’s, time and again, offered substance with the bat down the order isn’t written a great deal about is perhaps a bit strange.

But is it actually so; journalism, one might note, much like other spheres, tends to tilt towards the posterboys and the pinup idols.

The India Women’s team’s right-hander must have done something special to get into the side that includes Harmanpreet Kaur, Deepti Sharma, and Smriti Mandhana- isn’t it?

We are seeing a different version of Richa since her return, as she is playing with freedom and taking on the role of a finisher. Previously, she used to bat a little up in the order, taking some time in the middle to settle.

In this series, she scored 36 and 26 in the first two games and that too with a blazing strike rate. Although she is yet to score a half-century in WT20Is, but she rarely gets any chances or enough time to score big batting down the order.

The skill she possesses to knock the ball into the stands at the age of 19 is incredible. No doubt she idolizes MS Dhoni, who himself was a brutal hitter of the ball. Richa has scored 376 runs in 27 WT20Is so far, with a strike rate of 130.

And after this series, she has more crucial job to do for the country, which is the Under-19 World Cup. Richa Ghosh and Shafali Verma have been chosen to represent India’s Women’s U-19 team in the World Cup in South Africa.

Richa, one hopes, will try to maintain her current momentum, which will aid her in the upcoming competition.

The second T20I, frankly speaking, was also about the collective effort from the girls as Renuka Singh also delivered with a perfect super-over and took the wicket of Alyssa Healy.

With three matches remaining in the WT20I series, Harmanpreet and her teammates will seek to send Australia home with their first series defeat of 2022. 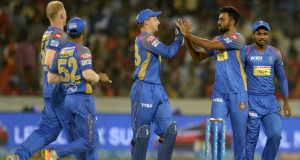 Abhinav Bose - April 11, 2018
0
The much-hyped IPL 11 is finally here. With it comes a promise of exotic stroke play and belligerent hitting interspersed with bowlers trying to...